39 Minutes of Bliss (in an otherwise meaningless world) 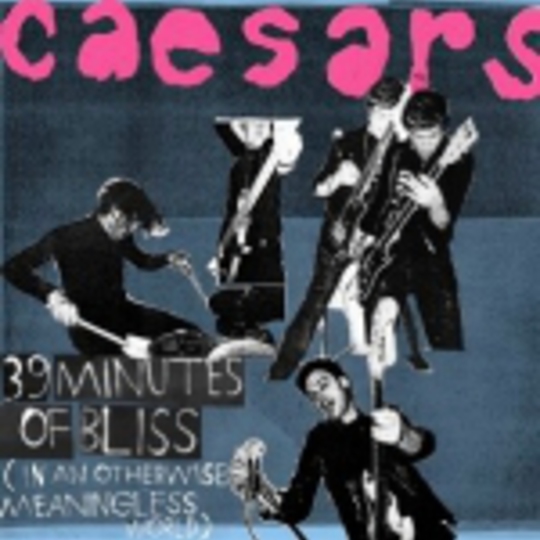 This is what you get if you bung Trail Of Dead mop-tops on a bunch of ‘How Soon Is Now’-addicted garage rock pretenders in a land before Hot Hot Heat. It's not bad. It's got good pop hooks, early on, and kicks like a ramshackled modern day **Clash (minus the politics, obviously!) messing around with synthy thingies. (Gee, I could SO _be_ an A&R man circa 2002!)

“No, I can’t hear nothing cus I’ve got my head stuck in the clouds!” Indeed.

Think about it. Band enters studio. They can do whatever they wanna do with a song. Yet nine times out of ten it repeats ‘til fade like every other song in their record collection... Fucktards.

At least they're not called THE Caesars, I guess that's one thing in their favour, but hang on...

GAWD! The singing on ‘OutOfMyHands’_ (or “haaah-aah-ands”) isn’t worthy of our demo pile. Producer obviously got bored and desensitized to what sounds good having done a billion other bash-bash-2-3-1 bands. Was nice of mister producer man to drop in the dumm-dumm-dum-ub-ding hip-wiggling guitar hook from the last Girls Aloud single tho.

“I wanna shoot crack, cus you’re never coming back. I wanna sniff glue, cus I can’t get over you!” Learn from these responsible kids, and you too can live in a Hoxton gutter dressed from head to toe in just what Dazed and Confused said you'd wear. At least, years from now, you can impress some girl in a bar and tell 'em you were in the best of a bad bunch of tribute bands circa 2003.

So yeah, another bunch of indie kidz in a land trying to be Detroit via NYC... it'll all be over soon.

Thoughts of the Day: What exactly is the sound of the Noughties? Whatever next, Zeppelin tribute bands?

Beast With A Billion Eyes