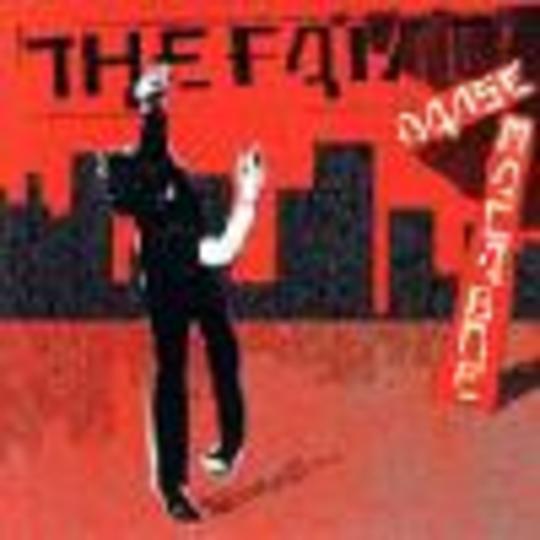 A number of ways I was to begin a review of ‘Danse Macabre’.

2. Many have said - and I’ve been one of them - that this ‘retro-futurism’ thing ain’t gonna go nowhere. Being retro-futuristic can only mean you’re ever going to sound retro, but never never ’futuristic’. And, anyway, isn’t the future so old hat nowadays? Tired, worn out ideas - isn’t it time the future caught up with the present? Perhaps it already has. This is, to all intents and purposes, the future. It’s 2003. Much of all forward-looking art over the past century has looked forward to where we are, around about, now, more or less, and that includes the electro-synth sound of the late ‘70s early ‘80s. So, by rights all that stuff should now sound like, well, now. Does it? No

Enter - via wobbly Blake’s 7-style teleporter effects, no doubt - The Faint. And while it’s certain that they’ve drawn some influence from the post-punk bloom of synth-pop/new romantic bands of ‘80-’83, it’s worth remembering that music of the early ‘80s didn’t actually sound like this. Probably couldn’t technically. In fact, it occurs to me that this is the sound many tried to make, strove to create in the synth-age, but could never manage.

Despite their fetishisation of the past, The Faint, whilst also having the advantage of the added history of Detroit techno, industrial and house which they could dredge for extra inspiration, added to the fact that mainstream rock music is swimming around and around in ever tighter circles like a fish in a slowly shrinking stagnant pond, sound, oddly, thoroughly modern. Neither as retro as you might think, nor as futuristic as they might want you to believe - perhaps time has finally caught up with 1981.

A headkick of Cabaret Voltaire. A petrol tear of The Normal. A lipstick kiss on a crack’d mirror of Visage. A fist of wires and broken circuitry of Nine Inch Nails. A stardust of Bowie. A Gaul’s gall of Daft Punk. An electric ‘friend’ of Numan. An exploding party-popper of Fischerspooner. A shock of Sigue Sigue Sputnik. A compute of Kraftwerk. A rivulet of jism running down the leg of Soft Cell. A synth of Human League. A future-fright of Front 242. A neon dream of Japan. A fractured dream of JG Ballard. A never-ending dream of New Order. A cyborg of Kevin Warwick. A cyberpunk of William Gibson - or should that be Billy Idol? A replicant of Phillip K Dick. An nihilism of Nietzsche. A pseud of ZTT.

And the question is: do we control the machine or does the machine control us? And do we have a choice anymore? And...

And techno-fear, and fear of no control and fear of the unknown into which we must plunge and fear of fear and fear of failing and falling. And the frisson of excitement-fear of what Lester Bangs called the Cybernetic-Inevitable where the machine will take over - as that is what we have/are/will design it to do. And that’s fear, and a potent fear and a fear that electronic acts have, especially, used in creation of electronic music, either in rapturous surrender (ala Kraftwerk) or as a way of confronting the fear, of turning the fear back onto itself, of regaining some control. And The Faint do this with their electronic rock which is energetic and muscular and driven and angry and exciting and twisted and funny (peculiar) and funny (ha-ha) and funny (not funny) and loud and then quiet and has 1,500 hooks of pure pop delight and...

And instead of ‘Travelogue’ or ‘A Broken Frame’ or ’Sulk’ or any other early ‘80s milestone that The Faint may have used as a blueprint, the album that ‘Danse Macabre’ most reminded me of was NIN’s ‘Pretty Hate Machine’. It’s sense of broiling, adolescent techno-goth seething, sharp electro stabs, buzzsaw guitars and canny pop nous make it sound like the album Trent Reznor should have made before ’PHM’. Or after it. Or, better still, instead of it. And...

6. Here are some song titles: ‘Posed To Death‘, ‘Your Retro Career Melted’, ‘Let The Poison Spill From Your Throat‘, ‘Ballad Of A Paralysed Mind’, ‘Glass Danse’. If you like the sound of those, you’ll like the sound of the songs. They sound just like they sound they are going to sound.

‘He Thought Of Black Chrome’, ’The Comfort Of Car-Parks’, ‘Berlin: Night City’, ’The Acid Rain Has Scarred Your Pretty Face’, ‘Standing Alone At A Party Wearing A Look Of Haughty Indifference’, ‘I Dream Of Wires‘

7. Lookout! Future android robot-men are here to deliver humanity a dire prophesy. Or something: “Feel the vapour pressure drop as the dark steam pours out the entrance / where every sense seems deadly weak from the frozen time you spent in transit / watch how mirrors clear themselves with the breath of frigid air”. Er... eh? That’s no scary robot, it’s just some nu-electro fop trying to sound a bit mysterious with a vocoder. Besides, that isn’t how robots talk. Robots talk like this: ‘I am a robot! I am a robot! Does not compute! Does not compute! MALFUNCTION ROBOT! MALFUNCTION ROBOT!’

8. So, by the 14th Century the Black Death had decimated Europe’s population. In Paris the dead accumulate to quickly to be buried, and so, in the Church of Le Innocents, the corpses are piled high in the porticoes, in front of which a market place is set up and a festival takes place. The living, now surrounded by the dead, are forced to accept the reality : Death is always close at hand, omnipresent. The wide arc of it’s scythe cuts down all, whether pauper or king, whether young or old.

A fresco is painted on the walls of Le Innocents, it’s called Danse Macabre. It shows Death, represented by skeletised cadavers, playing musical instruments and dancing around figures of the living; noble men, priests, trades men, everyone. They usher the living to their graves, the protestations of the living are met with mocking sarcasm, the grinning dead point out to them how their lives have all been in vain and that there is no reward for their life’s hard work. They are a momento mori (“Such as I was you are, and such as I am you will be. Wealth, honour, power are of no value at the hour of death”) reminding us to seize every chance of happiness we get for our time is not long. It would be a pity to squander it.

~ ‘Agenda Suicide’ from ‘Danse Macabre’ by The Faint.

9. The neon floodlit world the Faint occupy is a bleak and heartless place, one where you may need night-vision goggles to navigate. But this is no future dystopia, this is the present and they see nought but corruption and decay, from the dog-eat-dog mentality of the workplace (’Total Job‘), gossip culture (‘Let the Poison Spill... _’) moral bankruptcy of the urban sprawl where life is cheap (‘Violent_‘). The future? The Faint don’t think we have one.

When, at a snatch, oblivion ends our coil?_”

The only way I was going to end a review of ‘Danse Macabre‘.

If you’re wondering why I never mentioned Duran Duran at any time then you must be fucking mad.