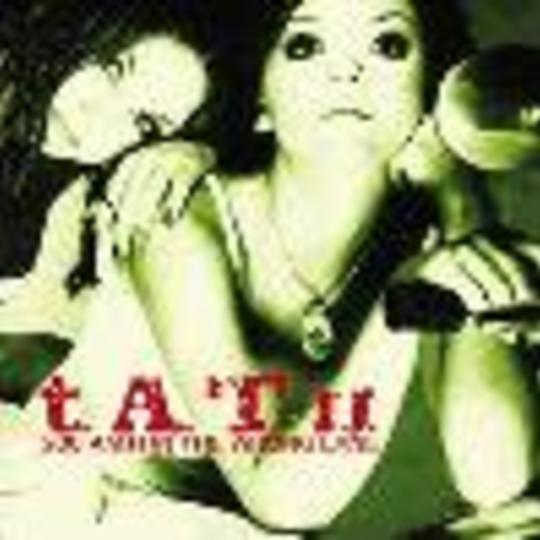 From Russia with a love that dare not speak it’s name (heterosexuality)(shh!), t.A.T.u, the - yes, here we go again - NAKED RUSSIAN TEENAGE LESBIANS SEXSEXSEX pop duo (hi Googlers!) have succeeded in doing what Drago failed to do in the classic cold-war satire that was ‘Rocky IV’; they have “krushed” the West into submission. The pop culture in Britain, mainland Europe and America have all received a knockout blow from one of the most calculated and irresistible pop creations for some time.

With alarming, and perhaps unwise, frankness, t.A.T.u’s svengali, Ivan Shapovalov, has openly admitted to using the “underage sex” and a coy, are-they-aren’t-they?, lesbianism angle to titillate his target market. Brilliantly, some would say cynically, most would say a bit of both, actually, Shapovalov has created a controversy that pushes his act, his product, out into the orbit of general mainstream media and therefore every home. Even before releasing their first album, tATu had the kind of notoriety that most rock bands can only have wet dreams about.

Indeed, after witnessing the video for the single, ‘All The Things She Said’, in which the teenage pair share an oddly chaste kiss, The Evening Standard, The Daily Mail, Richard and sodding Judy and other self-appointed moral guardians couldn’t help but rise to the bait and call for the single to be banned. Fantastic! The image of stern, fuddy-duddy grown-ups/‘normals’ finger-wagging their disapproval at such “filth” being “thrown” at “pop-kids” is the kiss of kudos for any group. The root of their concern, the increasing sexualisation of children, particularly girls in the media and pop world, is a valid one, but if they think that having a pop single banned is the right way to address the issue then they’ve got another thing coming. The counter-productive effects of such action has famous antecedents. I mean, you would have thought they’d have learnt the lesson from the banning and subsequent success of ‘God Save The Queen’, but no. And ‘All The Things’ producer, Trevor Horn, probably had a feeling of deja vu considering he was once the producer of Frankie Goes To Hollywood whose ‘Relax‘ single came under a similar storm of protest. Perhaps, like me, he too wondered if the extra amount of virulence in such reactionary outrage is because both groups are said to “promote” homosexuality?

Actually, other than their clothes are a bit skimpy, there seems to be very little to cause concern about the songs that Lena Katina and Julia Volkova sing, and their much talked about enigmatic sexuality (they have only ever admitted to being “in love’ with one another, not to being lesbians) is widely believed to be a (gasp!) marketing ploy. (And then there’s the fact that they have been spotted getting friendly with Russian boyband, Smash!)(!)

Oh yeah, they also have an album out. Apparently.

But, yeah, just as t.A.T.u’s image, personality and ’message’ is every bit as important and damn essential to their overall worth as it is with every band ever, and therefore should not be overlooked or treated lightly, the main reason to take notice is the music. Because it’s really very good indeed. Yes, really. If the reason for their success was because of their Sapphic suggestion then Fem 2 Fem would have had hits. The impassioned, giddy pop rush of ‘All The Things She Said’ is no one-off, the rest of the album is largely a bouquet of iridescent, thunderous, noisy mock-rock anthems that bitch and twist and curl their lip and flick their hip. A curious and curiouser classic of artifice and the authority of adolescence.

Okay, at first it sounds like someone let Roxette back in through a side-door. There’s an ever-so-slightly-quite-a-lot bombastic quality to it that reminds you of some sort of vague ‘80s stadium synth-rock nightmare. But then you wake up and listen again and listen closely and you realise it is in fact a distinctive ’00s clubland synth-pop dream. Phew

‘Not Gonna Get Us’ opens things nicely. The pounding drum-beat and electro shimmer are remarkably heavy-duty, almost Euro body music in style, and Julia and Lena’s vocals are at once strident and soaring then cool and tender. It’s as if the ABBA girls had sung for Laibach. The song is an archetypical they-say-we’re-wrong-but-we-know-we’re-right teeny rebellion tale. Revelling in the freshness of the moment, in the nowness of youth, they escape, dash into shadows “We’re gonna run / nothing can stop us / Even the night / that falls down around us”. It’s a theme that runs through the album, the insouciant pair whisper and wail through heightened emotional ups and downs - everything is so full on! - from wild abandonment to doubt to desperation. Confusion and wonder. “They don’t understand us!”, they scream, a cry of irascible teenage angst that has been carried through pop music from The Who to The Jesus and Mary Chain and The Smiths and beyond.

Speaking of The Smiths, their tale of frustration and woe, ‘How Soon Is Now?’, is transformed by scorched synths, furious power-chords and Lena or Julia’s defiant roar “YOU SHUT’CHA MOUTH”, into an angry punka blast. It’s an amazing version, but you have to wonder if the two Muscovites really understand what they are singing. Are they simply blank, empty ciphers for the team of producers to channel their talents? And in the end, does it actually matter?

Of course it doesn’t, don’t be silly, it never has. Pop stars don’t need to write their own songs (if you think they do then I’ll take your David Sneddon and raise you Elvis and Sinatra). But though their non-threatening lipstick lesbian image is seemingly marketed to appeal to men, the songs themselves are, by and large, intelligent and powerfully written. Even when the lyrics concern girl-girl love it’s never distasteful or there to titillate, mainly it plays upon the two-girls-against-the-world/only-you-understand-me premise, “I’m in serious shit / I feel totally lost / If I’m asking for help / it’s only because / being with you / has opened my eyes”. Though they often sound vulnerable they are never weak.

Immaculately produced by Trevor (ABC/Frankie/Pet Shop Boys/etc) Horn on three different tracks and Martin Kierszenbaum and Robert Orton on the remaining five (disc also includes remixes and two Russian language version tracks), ‘200Km/H’ never short-changes the listener with the kind of tawdry, quick-buck gimmick that some would expect of carefully designed creation. And though the lyrics - that go from oddly poetic (“the lights from the airfield shining upon you”) to plain bizarre (“like a game of pick-up-sticks / played by fucking lunatics” - try as I might, I still can’t picture that) - it’s the clear and distinct voices of the two singers that shine through. The conquering of the Western music charts rests, ultimately, on their slim shoulders, and a completely unprecedented success it is - because, don’t be fooled by the rocks that they got, they’re still, they’re still Julia & Lena from the Eastern Bloc - and they’ve delivered the first pop masterpiece of the year. Don’t pretend you don’t care.