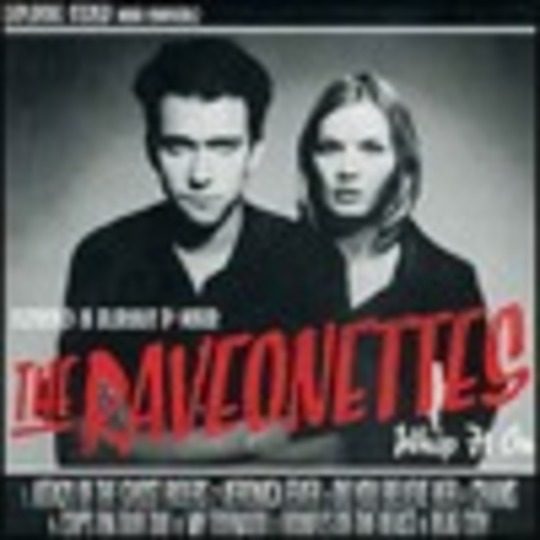 I can imagine the scene in the A&R office so clearly. "Scandinavian bands are IN_! Mysterious boy-girl duos are _COOL! Garage-rock is NOW!" It's really hard to fight the rising suspicion that The Raveonettes are genetically modified popstars, grown in a vat somewhere, designed by robots specifically to make me love them.

But you know what? Fuck authenticity. Some of the best pop music ever recorded was grown in vats by robot overlords like Phil Spector and Alan McGee and Pete Waterman. This is bubblegum at its finest, perfectly of-the-minute, perfectly assembled, perfectly catchy and perfectly disposable. Every song is under three minutes, every song has the same drum machine beat, and every song is in B Flat Minor, identical aural candy from a packet. And we like aural candy, don't we?

Whip It On? Bring it on. All the trendy hallmarks are there - a heavy dose of the Jesus and Mary Chain's dark rock'n'roll biker chic via the BRMC, boy-fights-girl My Bloody Valentine harmonies and woozy guitar fuzz via The Kills, Blondie's Lower East Side dead-cool sex appeal via the Yeah Yeah Yeahs and kitschy Cramps-style 50s B-movie horror via the 80s Matchbox B-Line Disaster. It's not the most original music ever recorded, true; straight from the Ikea of pop, it's beautifully designed, pre-fabricated flat-pack DIY garage rock. But it looks good, it sounds good and it makes me happy. Who could ask for anything more?