You Gotta Go There To Come Back 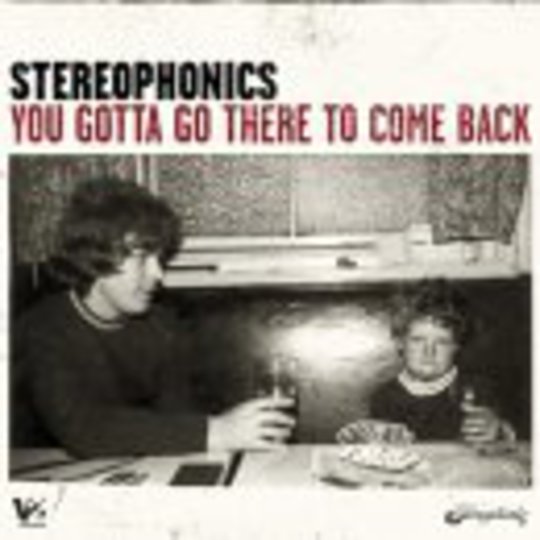 It was the lesbians that dunnit.

Finger-licking good they were too, stealing JD from that old pub and having sex in swimming pools full of beer. Or something like that. Yes music fans, try and remember, the Stereophonics' last good single, ’The Bartender And The Thief’. That doesn’t appear to be in danger of changing either, on the evidence of their latest effort. Where ’You Gotta Go There To Come Back’ could have been an experimental (don't laugh), rocking recount of the world’s ends and excesses, it instead seems to have been influenced by an evening out on his A&R’s expense account and a trip to HMV.

The fact that Stereophonics’ main draw used to be their rich rawness and ability to make rock 'n' roll anthems out of simple, homegrown tales of smalltown humour was lost on Kelly Jones ages ago. (His lyrics used to be written on paper bags, but now he pays for god to carve them in tablets of stone.) Having been indie-rock and made ‘a fair wad’, making sub-Neil Young dirge for tracksuited tabloid readers proved to have a more workable profit margin. And does anyone recall a Rod Stewart cover too for which their last LP was quickly repressed? Thankfully, ‘…Come Back’ features a return to ‘rock’, but unfortunately unless you enjoy taking two week holidays in MFI, there’s unlikely to be anything here of great urgency, though it’s not for lack of trying.

With the few quid Kelly Jones has made off the infinite masses who (the fuck are they?) have kept his records in the charts for an eternity, everyone’s favourite pixiewithhairextensions has indeed bought some new records in an attempt to ‘re-find’ his cool. 'Madame Helga' as you already know, sounds like V2’s other profitable (an equally forward-thinking) band, The Datsuns. ’Jealousy’’s slow, unbearable whine sounds uncannily like a Vines song, whereas title track ’I’m Alright (You Gotta Go There To Come Back’ is their terrifying attempt at Linkin Park. Don’t worry, there’s no (c)rapping, but it stinks of the same overproduction and bland, emotionless pseudo-experimentalism. Looped drums and guitars encircle a truly turgid piano piece that maybe could have grown into a decent b-side, had Kelly put a chorus in.

Similarly, ‘Maybe Tomorrow’ could have been a stunning rawked-out re-working of the theme from **The Littlest Hobo, but instead sounds like a turgid **Noel Gallagher cast-off. _‘So maybe tomarrrow, I’ll find ma wayeeeeehehhhh ho-ooom.’_ Truly inspired stuff. The acoustic slop of _’Maybe you’ll miss me too’_ on ’Rainbows And Pots Of Gold’ is Stereophonics doing Starsailor, and it’s not pretty. With only two of its thirteen tracks weighing in at under four minutes, the album is an incredulously long and yawnsome plough. It’s not totally devoid of tunes but any potential is suffocated under the flab of non-existent editing, its derivative and overproduced style and Jones’ constant whinging about taking drugs and travelling the world. Fuckwit.

‘You Gotta Go There To Come Back’ then, reminds us of a trip to the zoo. The novelty of not going for a while is initially nice, but the animal noises get annoying quickly and they have nothing intelligent to say anyway. Gradually the stink of it all starts to build and the feeling that it’s all a bit too well constructed to be ‘genuine’ and ‘heart-felt’ transpires and grates inside. Plus, you’ve seen it all before, much better.

The campaign to get Kelly Jones returned to wilds of Africa starts here.

39 Minutes of Bliss (in an otherwise meaningless world)