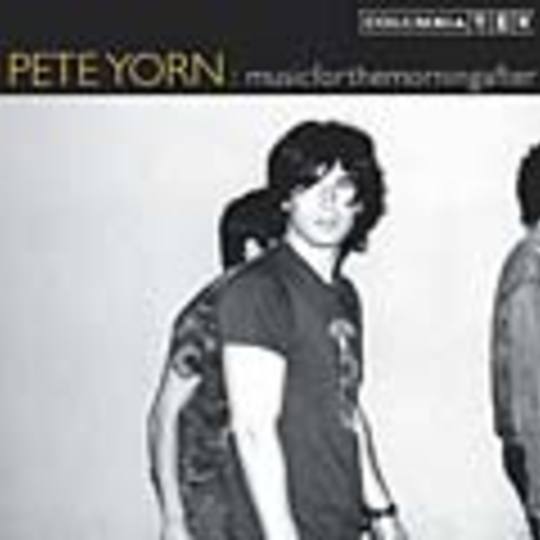 **Yo Pete Yorn! Wholovesyababy? Everyone. Well, over there they do. Here? Whossat? **

Well, he's this guy, y'see and he's from LA and he writes songs and sings them. But he does it really well. The album (well THE album over there, and simply the album over here) 'musicforthemorningafter' is a wicked melange of country, Velvets, 70's rock, Tom Petty, Elliot Smith, and all the usual. Elliot Smith is a good touchstone. He shares the same knack of writing songs with that Star Trek: Wrath Of Khan earwig quality. They seep into your ears and run around your head until you succumb. Or die maybe.

Opening track 'Life On A Chain' is a hillbilly ramble that crossbreeds Cure-esque keyboards and a harmonica ripped the hell off B&S's 'Me and The Major' you know it's all good. 'Strange Condition' is the catalyst for this review. It's the new single, the one that's gonna put him into the playas league, the big last push this side of the Atlantic. Probably. Its brilliant West Coast college rock, with guitars by Peter Buck! That's right! PETER BUCK! NO FUCKING WAY! The old bloke from REM who tried to put a CD into a fromage frais or something?!. Yes. That cool. But ignore the muscling in of 40 somethings onto this man's album, he's got cooler peers. The Strokes dig 'em as do The Vines, Weezer and well, everyone. You should too.

But the killer tune is actually 'Just Another'. It's a ballad, but remember, ballad doesn't have to be next to bollocks in the dictionary. It's a fantastic song: "You were lying wide awake in the garden, trying to get over your stardom" Yorn moans. No I don't understand either. But it doesn't matter. The only bummer is that the song might have possibly appeared on a Dawson's Creek episode. But it wasn't his fault, he needed the cash and the exposure to 456,000,000 people in trailers across America.

Along the way PY* takes in *Pavement, Wilco, and tells us that 'Kiss, they were the ones, they dressed so special'. Can that be bad? No. Plus you get house maintenance tips; "Pots and pans are indestructible. How do you respect your room? If you hadn't gone tomorrow, you could have stayed on 'til June". Ummmmm. Right.

The man's not a genius lyricist - well, perhaps he is and I'm extremely thick - but he can write a song. If you're lucky, he might come to England again. Oh hang on, he's on XFM on Sunday 28th July playing other peoples records for you. But if you're lucky he'll come back and play his records for you. That'd be better. I bet he plays Velvet Underground records on Sunday, they always do, don't they?