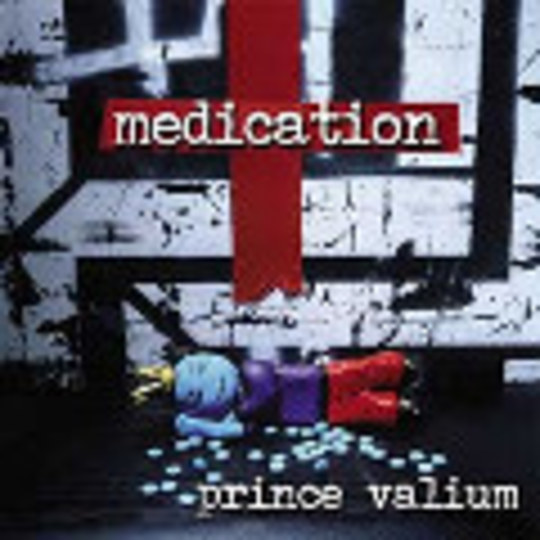 Once spiritual home to all things platinum selling, polished and rocking, things have come full circle for the city of a thousand megastars, Los Angeles.

Determined to disprove the theory that a band should be greater than the sum of its parts are LA rent-a-metal crew Medication. A supergroup of almost-household names in the echelons of guitar-downtuning musicians, on ‘Prince Valium’ the once adored are now peering hopefully into the void in hope of something. Anything. The occasional record sale, even a few fans perhaps.

The spine of the band – Logan Mader and Whitfield Crane – should need little introduction to those familiar with the bands in which they made their names, one-time saviours of the mosh Machine Head and retard-pop-metallers Ugly Kid Joe respectively. Should be capable of a tune or two then.

Medication have certainly read the book on nu-metal too, only to get fucked-up on vacuous rockstar drugs and forget it all, repeating faded memories with an empty hope of “will this do?”. Lead track ‘Loaded Gun’ promises better things as it crunches along in semi-memorable style; ‘Walk Away’ is hard to dislike; ‘Xanax’ has a grimly brutal riff worthy of its title. But it’s not enough.

A record this lacklustre would be acceptable from a fresh-faced bunch of chancers hoping to steal a ride on recent rock waves, but fans of former projects will expect more. In the end there’s too much chaff and not enough wheat, as Crane’s attempts to funereally croon like primetime Alice In Chains quickly wear thin, harking back to his stint in latter day Life Of Agony (infinitely preferable to any Ugly Kid Joe reminders admittedly). Tired lumpen guitar chunks and cod-haunting vocals do not a great band make.

Mind you, none of that stopped Staind.