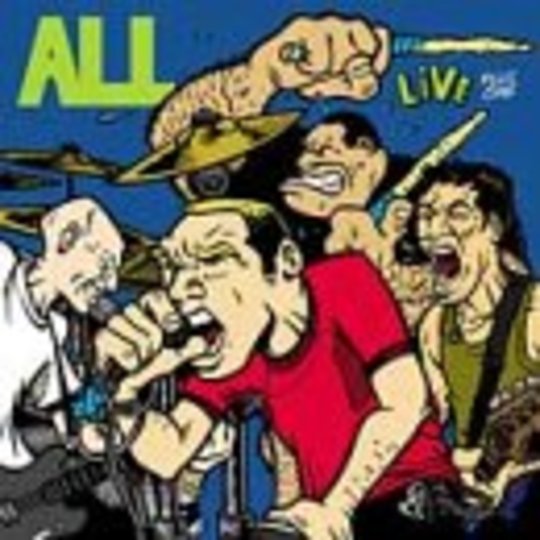 Punk bands everywhere seem to be obsessed with live albums right now (or is it just bands in Fat Wreck *and *Epitaph’s *live album series?) and now it’s *All’s turn. As many of you are probably aware, All are basically the *Descendents *with a replacement singer for Milo, when he decided to go to college (bearing in mind they all had to leave school when the band got big in the early 80s). Instead of keeping the Descendents name they recorded brand new material with All, reforming Descendents when Milo finished college.

Eight years & numerous albums later All are still around and this live album acts as a pretty good compilation of their stuff. Recorded March last year in Colorado this is pretty much what you’d expect from an All live album – the sound quality’s good having been recorded by drummer Bill Stevenson and Guitarist Stephen Egerton (also founders of Owned & Operated Recordings) and you can actually hear the hecklers in the crowd on this one.

All the classics are here – ‘Fairweather Friend’, ‘World’s On Heroin’, ‘She’s My Ex’ _and of course the short, fast comedy numbers like the hilarious _‘She Broke My Dick’.

But, I have to admit, I’ve always been a Descendents kinda guy. They started the whole Californian teen-angst melodic hardcore thing way back in ’82 and I can confidently say that without them, *Blink 182 *would sound a heck of a lot different! So what a pleasant surprise I had when I found a bonus live Descendents disc in the case! Hence the ‘Plus One’ bit in the title.

So wow! It’s ace, but weird too, seeing as all that’s different from All is Milo, but hey – you cannot replace Milo! I don’t need to name the classics – they’re all here, even the super fast, 30-second long ‘I Like Food’ _and _‘Coffee Mug’.

Well worth picking up for an education into who was responsible for this thing we call pop-punk.