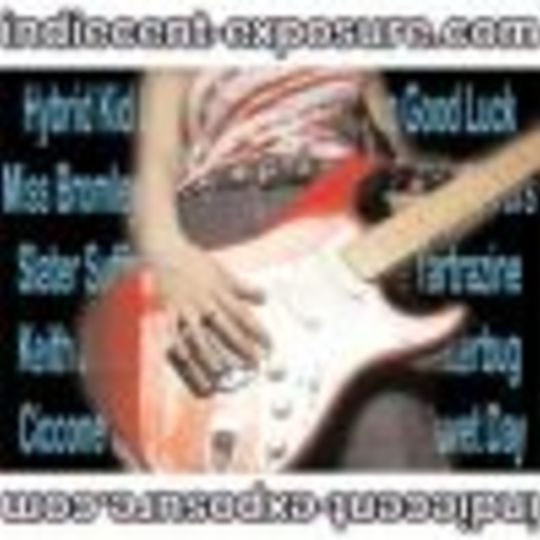 Sir Andrew ‘Quirk’ Thomas, a household name for anyone involved in fanzines, new bands and DIY/indie culture, has gone and made a compilation CD. Not content with producing Quirk, one of the few surviving fanzines in the land, hosting club nights in cool London toilet venues and producing mad electro-pop music under a series of baffling monikers, the Quirkster has – in the style of an indie pop magpie – gathered together the sparkliest, coolest, cutest bands from the underground and stuck them all together on a CD for our listening pleasure. It’s called Indiecent-Exposure.com and it’s really rather good!

Ciccone, Camden-upstarts-with-singles-out-and-videos-on-KerrangTV, open proceedings. This song, I am told, is the b-side to their new single ‘All Stacked Up’. It’s called ‘Ladykiller’ and it’s a very cool rompin’ stompin’ pop punk number, though in places singer Miss Rebekah Delgado sounds ALARMINGLY like Louise Wener from Sleeper. Next we have ‘Call The Girls’ by The Lollies, which is the best thing here by a zillion light years. An über-cool Annie Holland-style bass riff and then they’re off! This has all the ingredients of ace pop – lyrics that are both wise and humorous, a sing-a-long chorus about how the girls are going out tonight (who needs boys cramping their style?!) and bags of attitude.

This is swiftly followed by Glitterbug – ah, such a spangly name but alas, they sound like him from Savage Garden fronting a mid 90s indie band, complete with insipid vocals and an unimaginative, go-nowhere tune. They make me want to press the skip button. NEXT! Ooh, a screech of feedback and my ears prick up once more! Long Good Luck announce their arrival with sex and style but good grief! First they nick the riff from The Cardigans ‘My Favourite Game’ (I mean: of all the bits of all the songs in all the world that they could have chosen!?!) and then they proceed to nose-dive into bad-Beatles territory. Not really my cup of tea, like.

The Fairy Traders, on the other hand, are LOVELY. Girl-group harmonies, wobbly gin and cigarettes vocals, plinky pianos, wise, straight-talkin’ lyrics and I feel like I’m dancing on the clouds. And the chorus sounds exactly like drunken angels singing. It’s just GORGEOUS! Hybrid Kid walk the fine line that separates dull indie rock from insightful Elvis Costello magick. (I like Elvis Costello!) They walk this fine line rather like a man who has drunk too much Guinness and thus veer from ace to arse throughout the song. Bad verse, fab chorus and so on and so forth. La Pieta are from the US and I don’t know anything about them except that they write wonderful, touching indie pop songs that I want to play over and over again. ‘Surround’ is essentially an understated guitar riff topped with luscious, hypnotic boy / girl vocals and it sounds perfect. ‘My heart beats warm, my heart beats strong…’ they sing. They remind me of Mates of State. I love Mates of State. La Pieta rule the skool!

What do you get if you put Menswear and Blur and the Bluetones in a blender? You get Slater that's what. This band makes me feel like I’m fourteen again, dashing around in my Adidas gazelles! Goofy, brit-pop vocals and cute keyboard lines – they would have been HUGE. Miss Bromley bring a smile to my face with their country-tinged, tongue-in-cheek ditty ‘Kinky House of Sex’ – the little monkeys. But sadly, from here we come crashing down from the stars and hit a bit of a low. Plastik, The Skinflowers, My Pet Junkie, The Fighting Cocks and Trayscrape, pass by in a confusing blur of eighties-disco, drab grey y-fronts indie, ska pop, techno-folk and eek! nu-metal!

But then, Sufferkiss come to lift my spirits with their breezy, gentle indie rock that right-on-cue erupts into a Captain-era Idlewild chorus. Yeah! Next up are White Man Kamikaze, who I was reading about on Drowned In Sound this very morn. Their song ‘Nature Boy’ has lots of “WOO!” shouty bits, jagged guitars and energy by the bucket load. Hot on their heels, Tartrazine – or the ‘tarts, as their fans call them - proceed to fill our ears with sparkle-dust. ‘EC4’ is folky, rocky, poppy and dreamy in equal measures. I want to play it again and again if only to hear Em Sparkle tweet like a mockingbird. Lovely!

Solo chap Keith John Adams strums his guitar and sings gleefully about pyjamas! I kid you not! If I’m being honest, this is not what I would choose to listen to alone in my boudoir but it does have a certain charm! The last song on this CD is by Duvet day. However, from the distinctive, matter-of-fact vocal style, we can ascertain that this is in fact Andy Quirk’s new project. And it’s ACE! Electro-pop done good, with occasional clumsy lyrics: ‘The way you talk, you’re just so thick…’ sticks in my mind! Still, this is a wonderful, danceable, pop-noir tune and by far the best thing Sir Quirk has done musically since Satsuma.

So, we come to the end of our journey through the indie pop underground! There’s at least eight songs on this CD that you will fall truly, madly, deeply in love with, as well as a handful that will bring a giddy smile to your face. Get yourselves to www.indiecent-exposure.com and place your orders now!