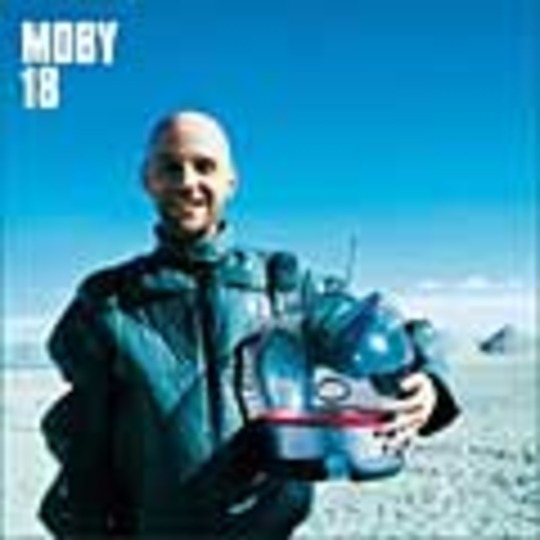 Moby is the antichrist. I don't need to tell you about 1999?s gigamillion, original selling 'Play' do I? Well at least it was original once, before it was licensed to 417 adverts, before it came bundled with every coffee table sold in the country, and even I, a fan of maverick genius, got sick of him.

18* is more of the same. For the first time in his career, Moby has stopped moving. Every album prior to this was a enormous leap forward in style and content; be it 1990's minimalist house of *'Instinct', 1995's eclectic ambient gabba rave of 'Everything Is Wrong', 1996's psychotic-metal 'Animal Rights', or 1997's gentle, electronic 'The End Of Everything', Moby was always trying something new, moving somewhere. And now he's reached the end of his journey. He sold about 6 million of 'Play', and only a fool, or someone with integrity, would dare mess with the formula.

18* is a sequel to *'Play', and like all sequels it contains the same ingredients rehashed in a slightly different way to fool the people. Sampled gospel vocals rebuilt over mellow grooves? Check. Guest vocals from anonymous session musicians? Check. A complete lack of excitement throughout the whole of the second half? You betcha.

There are a handful of great tracks on here - the title track'18' and 'Look Back In' are interesting excursions into a territory he visited briefly on 'The End Of Everything', but other than that, this isn't a record that has any sense of urgency, vision, or personality in it.

In the booklet he claims he has 3,000 unreleased songs. 3,000? And this is the best he can do? Anodyne, uninspired, catatonic repetition of an idea that was interesting in 1999, but now just seems oddly past its sell by date.

It seems with this release he's lost his vision, and is travelling rudderless in circles. I know the album's only been out a day, but it's got none of that niggling, infectious sense of wonder or innovation - the compelling desire to listen to it again - that 'Play' had on it?s first few exposures.

Great albums feel as if every time you hear them you?re discovering something new in the sonic painting. This just feels like I've heard it all before, and done better, on another record Moby made.

*18* might be a competent, well performed, well produced record, but its lacking the vital ingredient that makes records great: passion, vision, and the quest to take music somewhere it hasn't been before.

Come in Moby, you've lost the plot and your time is up.

Cornelius at Paradiso, Amsterdam, Mon 13 May