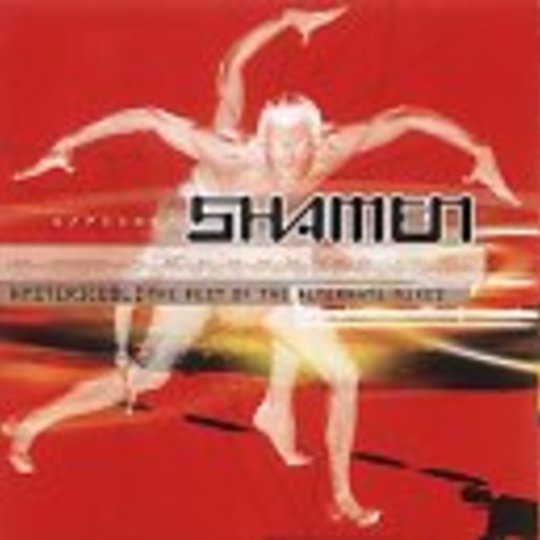 “E’s are good! E’s are good!“ was the chant all over the land a decade go, when Britain was immersed in the depths of acid house 1992 style, the Prodigy still had long hair, silly white tracksuits and based records on children’s safety commercials. And back when * The Orb* still sold bloody records. Somewhere in the middle of this post-grunge UK rave scene was The Shamen, who, thanks to the credibility destroying ‘Ebeneezer Goode’ (which stayed at number one for about 8 weeks before finally being deleted while still at No.1), were soon perceived as a novelty house act: too commercial for the underground, too underground for pop music. Stuck in a commercial twilight, something had to give – and it did in 1998, when the Shamen abandoned the realm of the physical world and now exist only as digital avatars,- “Shamenigotchi”. Nutters.

With being openly mocked, its easy to forget how influential and groundbreaking they were once. Their obsession with remixing led to a stream of remix EP’s and albums; when other people were issuing remix albums and it was seen as a bold move, The Shamen issued ‘Progeny’, a remix collection lasting over 100 minutes, on triple vinyl containing over 30 tracks; 15 of which were samples allowing you to remix the thing yourself. Of the same bloody track. That’s an not an album but an exercise in postmodernism (not to spoil things they then re-released the track in 1996, with an additional load of new remixes – now that overkill). And since then, every commercial single features a multitude of remixes in extremis: not to mention all the remixes that were only ever circulated on promo. However the choice of remixers they used was like a veritable who’s who of electronica and techno: Hardfloor, Moby, Danny Tenegelia, Richie Hawtin (plastikman), Renegade Soundwave, William Orbit, Future Sound of London.

All of which are featured of this latest CD ‘Hystericool – The Best of the Alternate Mixes’. Lets not beat around the bush here – it’s an awful title (a play on their single ‘Hyper-Real’) cash-in, compiled and produced with no help from the band, just a load of remixes licensed off to a budget price label. Unlike the previous remix CD (which can be found as part of ‘The Shamen Collection’ – a 2 CD set featuring one CD of singles and another a DJ megamix of remixes), this at least is unmixed, allowing you to collect rare mixes together in one package. However, ‘Hystericool’ fails on that count also, due to its poor choice of mixes: the majority of mixes here have been fairly commonly available in the past, and only a couple would qualify as genuine rarities to a dedicated collector. Some of the mixes are lifted straight off readily available albums for example ‘Lightspan (Renegade Soundwave)’, The original album version of ‘Omega Amigo and the FSOL mix of ‘Re-evolution’ to name but three.

As for the music itself , this compilation is a disparate and erratic overview of The Shamen’s greatest moments, often presented as less than the sparkling pop gems they are and in obtuse, deliberately technoid form. At least it gets ‘Ebeneezer Goode’ out of the way first, meaning it wont bother you later on, but in the *Richie Hawtin (aka Plastikman) * South of Detroit Vocal mix : easily available to fans, but coming across like a pulsing buzzsaw and overburdened with twinkly Italian piano house lines – easily removing any pop sheen the track had and turning into minimalist techno. The remix of ‘Boss Drum’ (the Tribal Buzz 12”) is mainly just an extended take on the 7” mix, with a few new riffs thrown in, but still hook laden; and the 'Shamen Alternative Vocal' mix of ‘LSI’ is still retaining the overall essential structure as the single, only with a few new beats at the beginning.

Then comes the aforementioned ‘Progen (Move any Mountain)’ – this mix is the readily available '666 Edit'. Totally unlike the ordinary version, it starts with a sound not unlike the ‘Theme form S’Express’ with syncopated beats, a minimalist vocal and some sequenced abrasive-ish guitar-like noises (“bang to the beat of the drum” – later sampled on the crossover dance ‘Ethics’ ep by La Luna) that totally removes the track from its pop origins and turn it into a stuttering and harsh alternative to the usual. ’Omega Amigo’ is just the same as the album version, and ‘Hyper-real’ is the 12” mix. Both of these are virtually the same as on the original ‘Entact‘ CD, but ‘Hyperreal’ using chopping stabbing guitar synths to an almost reggae-ish effect.

At the other end of the extreme is ‘Make It Mine’, remixed by Moby. With such a household name on remix duties, it would be churlish not to include it here if it helps shift some extra copies, but anyone who is a fan from the ‘Play era would be disappointed, dating from 1991, its far more in the vein of his earlier rave works like ‘Go_’ with spiralling basslines and melodic ambient bleepy electronica, rather than the soulful vocals and hooks-a-plenty one associates with him today. ‘Possible Worlds (Shamen deep mix)_’ continues in the same way. ‘Re-iteration’ (aka ‘Re:Evolution‘) is the collaboration with Terence Mckenna, as remixed by Future Sound Of London, here in ambient guise, ala their ‘Lifeforms’ CD; only minus the innovation, replacing it with echoed vocals, tabla’s bleeps, and ambient swathes with ethnic vocals. While being notable for being one of the very few remixes FSOL have ever done, its ultimately a disappointing curio.

The main principal rarity here is the next track ‘MK2A (Danny Tenaglia Vocal Mix)', the only previously unavailable mix here, not even on that unreleased single’s promos. ‘MK2A’ shows minimal progression for the Shamen, being catchy but inoffensive, presented here in a smooth house reworking. The last Two tracks are similarly smooth house excursions: ’Destination Eschaton (Hardfloor Vocal mix)’, which retains the catchiness of the original before apegiating into deep house (thought the Shamen once called it “hardbag”!), and the closing Todd Terry mix of ‘Phorever People’ (a relative rarity), which ends the album in non-so-much a bang as not even a whimper, but just a fade out.

Ultimately, to do this properly might have led to a critical re-appraisal of one of the most under-rated techno bands ever; instead this tarnishes what remains with a cheap cash-in, a commercial move the likes of which has soiled many a bands legacy; Motorhead and Sex Pistols being 2 prime examples for cheap cash-ins. It’s a hotchpotch of hastily collected remixes with little thought for coherency as a listening experience, and even less thought for the collect seeking to find rare remixes.

2 tracks here are lifted direct from the original album mixes (so much for being alternate mixes eh?), and 6 off easily available remix albums. That leaves only 5 tracks, 4 of which are already on commercially released singles. As an exercise in collecting rare remixes and making them available, its unsuccessful; as a greatest hits collection, well its even less successful. As a remix album in its own right, there’s been little thought except to keep the general sound of the album in a smooth deep house vein. That omits a great many of the more interesting and collectable remixes in the Shamen back catalogue, like the Meat Beat Manifesto mix of ‘Ebeneezer Goode‘ (which is psychedelic bigbeat years before it was invented, the kind of which the Chemical Brothers learnt all their tricks from) or the LTJ Bukem mix of ‘Transamazonia’.

All in all, its safe, predictable, unchallenging, and for completists only. But if you’ve got the albums already, there's little point, its like it exists only to sucker in the unwary, the fanatical or obsessive. The only major selling point here is the price: as part of a budget range, it should cost no more than £6-£7, and one major chain even has had prominently in its sale at £3.99; which for the price of a CD single is an absolute bargain. But to do this properly would have involved a double CD, some thought and careful selection (like the otherwise unreleased studio tracks available online, ’Tekfunk, Mobula 98, Ectomorph and U-nation’ (as circulated on promo), rather than just a hodgepodge of whatever some backroom boy thought would do. The moral here is buyer beware, but if you really want to discover this band, go buy the original UK version (rather than the US remixes) of ‘En-tact’ and find out why they once deserved to be deemed innovators not imitators . But at this price, you won’t get ripped off too much.