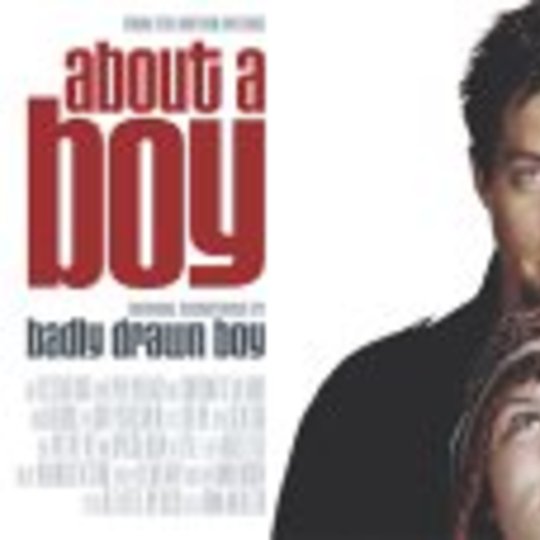 Why Damon? Apart from the money, why have you made the soundtrack to the latest Hugh Grant Brit-Com?

Four years ago you were making scratchy indie songs. Since then, although you weren't dressed for success, success came a-knocking anyway. Hit album, couple of minor hit singles (one with a video showing Joan Collins in the bath - let‘s draw a veil over that, shall we?), Mercury Music prize win, you even had your own backlash. You’d made it. And now... ?

Now this, something called ’From the Motion Picture... About A Boy Original Soundtrack Composed and Performed by Badly Drawn Boy’. Not even a score but seven new songs and a clutch of instrumental ditties used, let’s be honest, as an advert for the latest Nick Hornby adaptation.

Right, so, before we get the anticipated follow-up to ‘99s ‘The Hour of the Bewilderbeast‘, which is coming later in the year, we get to snack on this.

But as to whether it’s to whet our appetite, to lighten the load of that aforesaid anticipation, or just to make him a heap of cash, well, Gough only knows.

There are some good songs on here though, fortunately. Unfortunately it’s mixed up with a load of water-treading, soft-peddling stuff. ‘A Peak You Reach’ is a goody, it characterises the best of this collection. Tuneful, sunny and upbeat, it scamps along at a fair old whack. But, whilst it’s poppy, infectiousness recalls McCartney in ’Good Day Sunshine’ mode, Gough‘s slightly doleful vocals - themselves sounding like Gough doing Lennon doing Dylan - give this and the other songs some necessary ballast, stopping them from floating off into sweet-toothed whimsy.

‘Silent Sigh’, ‘Above You, Below Me’ and ‘Something To Talk About’ are perfectly crafted, driven, acoustic pop tinged with a certain sourness, but too vague to really connect. Though they fare better than the hapless ’A Minor Incident’, an example of lazy, mechanical songwriting which, to be fair, unlike the other songs here, sounds like it was specifically written to fit one of the scenes in the movie.

As for the instrumentals, well they are mainly itty bits of incidental music that are either a few syrupy seconds of nothing much or horrible sax-led meanderings. Gough sometimes likes to throw a few stray scraps of electronic noise or other sudden sounds into the mix to jazz it up a bit, but, even so, they all just end up getting in the way. I mean, what are they for? I don’t mind you showing me round your new digs, an’ all, but times awastin’.

‘Walking Out of Stride’, on the other hand, is a thin slice of gorgeousness, it’s brevity making it a refreshing gulp of clean spring air and ‘River-Sea-Ocean’ is a delightful, breezy skip amongst the clouds. Dreamy 60s perfect pop, it’s a glider ride over sparkling lakes and sun-lit headland. So giddy! So effervescent! Okay, so it’s featherweight, okay so it’s one-dimensional, but only in the same way that freewheeling a bicycle down a steep grassy hill is one dimensional. It’s one of the moments when Badly Drawn Boy coheres, utilising it’s new-found, more sophisticated sound without ending up all stodgy. These moments, sadly, come in [drip, drip, drop] little April showers: refreshing but all-too brief.

‘About A Boy’ reminds me of Baby Bird’s foray away from the lo-fi, bedsit tinkering of the early work into the more polished, conventional sound of ‘Ugly Beautiful’. Gough is, I think, far more successful in his endeavour than Steve Jones was, but still, in eschewing the more rambling but more personal, more immediate sound of his first few EP recordings he hasn’t quite successfully made the leap to a more slickly produced work. Perhaps this is due, in part, to him yet having found a way of comfortably spanning both the mainstream and indie-cool worlds, and this ‘stop-gap’ soundtrack is part of that process. Hope lies in the second album proper, then.

At least he’s gotten rid of that sodding woolly hat, anyway. Just to look at him in it used to make my forehead itch.