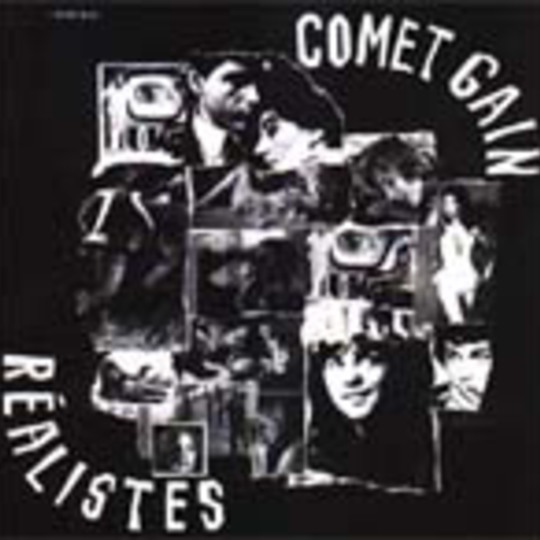 Comet Gain’s world is not an un-nice one. Every dancefloor crawls with new wave chic, and the bars weep because they would surely collapse were it not for the elegant wasters, wrapped with leather and feathers for hair, who support it with their casual leanings and comatose pout-stares. Every song ever written is a beautifully crafted, 3 minute indie-pop gem, leaving a high percentage of teenage girls left sopping wet and smiling, their first sexual experiences a reaction to 7” singles. Every kid is nearly nineteen and fucked up on drugs, but will feel great in the morning and maybe even scrawl something on a wall or go and play guitar on the “keep off the grass” grass in the park. They may even laugh a little because it says: “keep off the grass” and they’re smoking drugs right there. Right by the sign. Ha.

It must have come as a confusing surprise to Comet Gain that “Realistés” has slipped out into the real world. (That’s the real world with it’s cynicism and problems and it’s grey.) Surely it can’t have been made with that intention? Just cos Kim Wilde screwed Phil Spector round the back of the indie disco, and then - like a black widow - ate him, are we REALLY expected to baby sit this sugared, alien embryo?

For all the clever bohemian musings and Spanish manifestos on it’s cover, this is still a record that racks out frivolous lines like “Will you take me/Will you take me/ to the movies?/ I’m feeling groovy” (‘Movies’) and enjoys the idea that, because the music is so un-incredible, choruses have to be verbally announced (‘My Defiance’) [see also Athlete]. It also has the maybe-ironic-maybe-not audacity to use a French word meaning “realistic” as the title for an album that doesn’t really grasp realism, thematically, at any stage. In fact, it’s idealistic parallel universe roots show through all too often.

Comet Gain’s world is, indeed, not an un-nice one, but honey is, also, not un-nice, and no one wants that all in their ears.