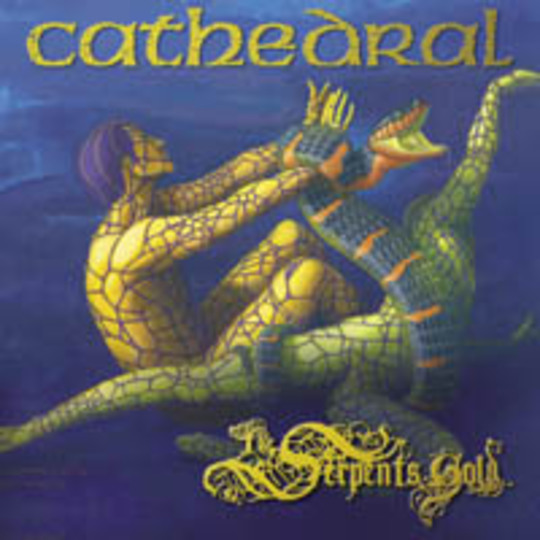 While most DiS-readers’ familiarity with Coventry’s finest will be frontman and Rise Above honcho Lee Dorrian’s contribution to Probot, Cathedral *remain ingrained in the hearts of all doom / stoner-rock fans (Dave Grohl included) as one of the finest doom-laden acts of all time. So, following *Carcass’ gloriously sick splatter-core collection, Earache have assembled this 2-disc / 27-track Best-Of, spanning Cathedral’s influential career of creating some of the heaviest, stoner-sludge riffs known to man.

Like most 'Best Of’s ‘The Serpent’s Gold’ **takes a nostalgic delve into those cuts you gained so much enjoyment from once upon a time, only to be pushed to one side as you became entranced by newer, more advanced hybrids and styles. Tracks from their grimy, slow-burning early years crack open the lid on this two-and-a-half hour aural marathon, progressing logically to later, more accomplished material such as ‘Utopian Blaster' _and the **Black Sabbathian march of _‘Stained Glass Horizon’. But it’s their deep, heavy-riffing heritage that Earache seems keen to promote here, with just one track included from their last album ‘Endtyme’, with cuts from their debut ‘Forest Of Equilibrium’ _and their classic follow-up _**‘The Ethereal Mirror’ **gaining prominence. But given the shaky melodies of later tracks you sense that’s probably how Cathedral would want to be remembered anyway.

Disc two contains 12 unreleased rare tracks and demos, collated by the band themselves, together with some new artwork from Dave Patchett and two exclusive interviews with Dorrian and guitarist Garry Jennings. It makes this an admirable summation of the band’s legacy and as worthy an introduction as any to the gods of cosmic noise.