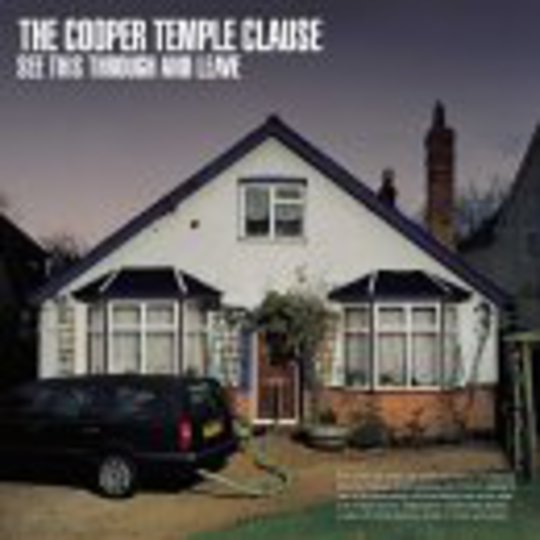 For the last twelve months The Cooper Temple Clause have been building an army of admirers. Signing up recruits on a series of nationwide tours, they now find themselves with sufficient ammunition to begin in earnest their war on flimsy plastic pop, and insipid half-baked rock.

It won’t be easy, but as anyone who has attended their incendiary live show will testify, TCTC are well-equipped to cope. They are the anti-Starsailor, the antithesis of Coldplay. They have issues, bags of attitude. They scream about Panzer attacks, about murder, and killing music. Your Mum would hate them.

At a Camden Monarch media shindig last February, TCTC did not so much blow away fellow performers Haven and The Experimental Pop Band,, as shove them to the ground, beat them all to within an inch of their drab little lives, then kick them outside and leave them for dead. They were awesome.

What many people, this writer included, really wanted to find out, was whether such startling power could be captured on record, whether The Cooper Temple Clause could find the songs and the nous to sustain their initial impact – and what an impact – over the course of an entire LP.

Well of course they couldn’t. To do so was always going to be an impossible task. It’s sounds a strange thing to say, but TCTC were probably on a hiding to nothing the minute they revealed what a terrific live proposition they were. After witnessing them at first hand, almost anything they committed to tape was likely to suffer by comparison.

But even so, judged purely on its own merits, ‘See This Through And Leave’ contains 11 exhilarating tracks which provide a welcome shot in the arm for British rock (that’s RAAAWWKK!!!) music.

As a result of their multi-layered sound, and a couple of characteristically eclectic EPs, these six Reading upstarts have been variously compared to Led Zeppelin, the MC5, and Pink Floyd. The nearest recent thing to this debut album though, is Primal Scream’s 'XTRMNTR', a similar marriage of heavy guitars underpinned by electronica, shot through with a thinly-veiled pop sensibility.

Opening in comparatively demure style with ‘Did You Miss Me?’- it takes a full three-and-a-half minutes before Ben Gautrey’s whisper gives way to a screech as the guitars kick in - the album’s pace accelerates rapidly with the current single, ‘Film-Maker’. A double A-side accompanied by ‘Been Training Dogs’ (think Black Sabbath with the edges taken off), its angular riff and menacing chord progressions combine to produce TCTC’s most satisfying three-minuter thus far.

‘Who Needs Enemies?’ is a measured, mid-tempo strut, sung in Gautrey’s best Liam Gallagher sneer, with a rousing chorus that marks it out as a safe bet for a future single. ‘Amber’ and ‘Digital Observations’ continue the departure from the familiar frantic formula, with the latter stretching out to become a seven-minute epic – that’ll be the prog-rock element surfacing then.

‘Let’s Kill Music’ follows, providing a short, sharp reminder of what TCTC do best, before segueing into ‘555-4828’. As the album’s only real foray into full-blown electronic experimentation (vocal samples, Big Ben chime samples, a smattering of white noise), it’s a tad tokenistic, but sets things up nicely for the record’s closing salvo.

‘The Lake’ is as close as The Coopers get to recreating the excitement of their live show. Quite apart from the lyrical desperation (“Pull me out/Don’t let me drown in here”), the music is sublime, the track shifting up a couple of notches halfway through to mutate into a satisfying guitar onslaught.

The grandiose finale, ‘Murder Song’ may be stylistically overblown, but this only heightens the drama of its chilling narrative, which, along with the refrain “Please believe me when I say/This is how it has to end”, leaves little to the imagination. What a way to go.

Baby, You're My Light