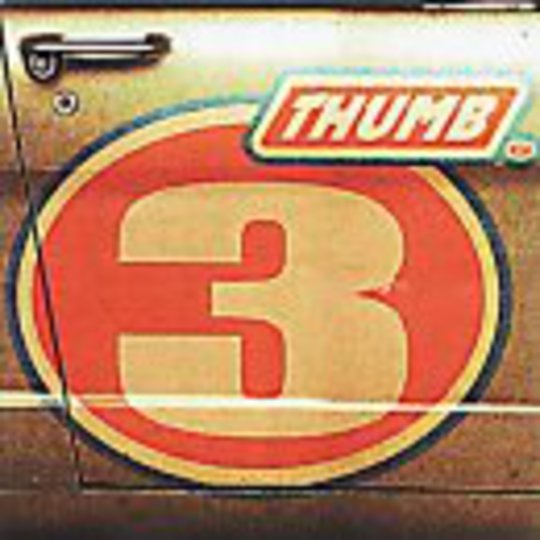 “I believe it’s still in me, that I can turn you… up! Side… and Down!”, the opening lines from Thumb’s debut UK album contains a certain exuberant passion reminiscent of the earnestly shrieked _“leather! Metal !Spikes… and chaaains!” _line in the “classic” Manowar song ‘Gloves of Metal’, which requires frequent repetition and passionate interpretations when inebriated.

Not that I’m comparing *Thumb *to Manowar or anything. Indeed “3” is a jumpier and chunkier metallic offering with more muscle and depth than anything the self-proclaimed Kings of Metal could muster.

Born into the hardcore and punk of the early 90s this Dusseldorf quintet, although nu-metal in their intentions, bring to the fray elements of Straightfaced and Snapcase, the latter particularly evident in ‘Stupid’, with it’s sliding riff alternations.

However, what Snapcase lacked in melody & fierce emotionally charged vocals Thumb have in heart-wrenching abundance. Lines like _“Pain, hate, fear & jealousy… feed my sadness & my agony/ I’m in a spot where nothing can feel right” _are sung suspiciously over-emotional, brimming over with impassioned feeling. Sudden vitriolic outbursts like _“I’m still fucking you up” _along with frankly unneeded DJ scratches and predictable Papa Roach rapping signals both the adolescent audience which* Thumb *are aiming for but through repeated listens, unlike other acts wringing every ounce of originality from this genre, Thumb touch on elements which may see a progression beyond the four walls of rapping, downtuned riffs, persecution and DJs.

It’s as if the blind’s have been opened & a new approach to metal is clear to see but the band in question feel restricted by their chosen genre in order to expand. I suppose we’ll have to wait until their third long-player to see if this is affirmed. It’s like listening to Lost Prophet’s debut and being on tenterhooks for an album with songs which fully indulge into ideas touched briefly on previous efforts. And like the aforementioned debut “3” is armed with strong & musically powerful songs which, despite what’s already been said in this review, strangely draw you into the album throughout it’s course. Songs like “Fade Away’, “Break My Back” and the Deftones-y feel of ‘More’ where varied dynamics are explored as much as shaded dual guitar harmonies.

Thumb and EMI might be looking for chart success considering how sunny today’s rock climate has become with Papa Roach & Linkin Park (the latter’s recent album having been the 10th best selling album in the UK this year). But with the yoof of today’s fickle music taste the simple fact they’re German may mean the disapproval of some baggy-panted ‘homies’.

As for the more open-minded nu-metallers I’d recommend giving Thumb a chance.