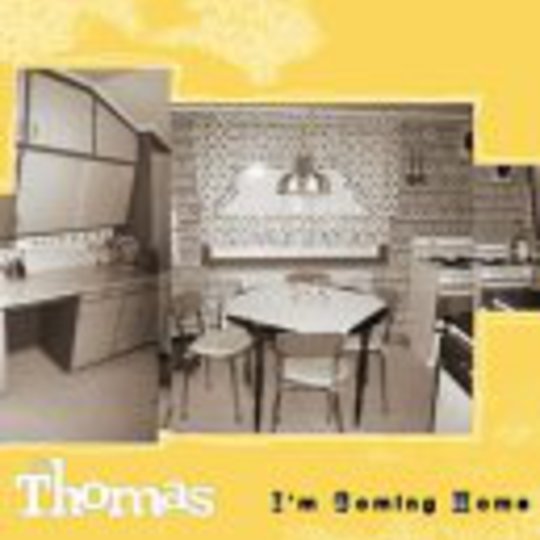 ‘I’m Coming Home‘ is an album of bare-bones Appalachian folk by Thomas Hanson. It is an album so ripe with the muddy texture of the old western frontier that just listening to it, you can just picture him, alone by a campfire in the hilly forests of the North Eastern US. Plucking out a rudimentary tune out of his trusty battered banjo, a tin plate of fried beans at his feet, a bottle of red-eye to wash it down with, and a musket, ready cocked, to ward off some mean ol‘ bobcat that‘s sniffed out his catch of mountain tuna.

Thing is, Hanson is a 25 year old Norwegian pop star from Oslo.

Oslo? What is going on with this sudden insurgence of Norwegian music? Who rattled their cage?

First the recent Nordic invasion bought us the hushed acoustica of King’s of Convenience then the soothing folktronica of Royksopp and now this fresh madness. Doubly alarming is that first hearing of Hanson’s vocals will have you thinking “bloody hell, it’s Neil Young!“. Yeah, right down to the Yankee burr, Hanson has ’Harvest’ era Young’s falsetto shiver well and truly pegged.

But why? Why would a Scandinavian choose to have Americana inform so much of his music? What can he ‘know’ of US roots music? How can he ever hope to produce original music if he adopts an alien style? Is there any connection between Norway and the USA? What _IS_ going on here??

Questions, questions. I don’t necessarily have any answers - I mean, you’d be better off asking him, not me - but some reasons as to why are here. Firstly there’s the name, St Thomas, clearly in honour of his hero, alt-country’s brooding dark genius, Will Oldham. *Oldham * likes to play games and adopt personas, like his latest moniker ‘Bonnie Prince’ - and if a prince, then why not a saint? What this allows in songwriting is a freedom from the palpably autobiographical, you can be who you want to be and you can sing about what you like from whatever viewpoint and do so with impunity - just ask Marshall Mathers.

But I also think there’s a physical connection, a fair and straight swap between the spectacular but forbidding landscapes of Norway and the American wilderness . The majestic fjords for The Great Lakes, the open grasslands and tundra for the wind-whipped prairie, and the forest covered Jotunheimen range for the equally verdant Appalachians.

No wonder Thomas feels so at home.

Largely plucked banjo driven, it’s skeletal, ramshackle arrangements aided with bowed saws and arcane percussion make it appear old-fashioned. But though ‘I’m Coming Home‘ certainly utilises old-fashioned instrumentation, don’t mistake this the work of some future-hating stuckist, only contrarily avoiding modern technology in a bid to grasp some sort of wrong-headed notion of ‘authenticity’. For, unlike stuck-in-the-muds Starsailor, Stereophonics, et al, St Thomas doesn’t appear to be doing this because of some love of ‘Whisperin’ Bob’/Mojo mag approved classicism, more some untrammelled drive and deep-seated, innate feeling for the music he loves. Like The White Stripes’ open-hearted, honest approach to garage-blues, this works because there is a freshness here and not some smug, overly studied pose. And furthermore, a thoroughly modern milieu it may not be, but the songwriting is bang up to date. There are some great, modern pop songs on here!

And, while I’m about it, I may as well talk about some of the songs on the album.

Opener, ’The Cool Song’, is a jaunty, rolling number slashed through with blasts of harmonica and obliquely playful lyrics (“_I’ve never seen a cowboy before / never told a story so sore. / Well what do I tell you now? / Will you ever know somehow? / Please do not understand / that I am a normal man_“). Even without the aid of pedal steel guitar, ‘Goodbye Emily Lang‘ manages to sound like a lovelorn trek across the high plains - all to a chattering Latin rhythm. The bleakness intensifies on ‘Strangers Out of the Blue‘, a ghostly organ hums throughout, laying a bed for the stark pluckings of guitar, a tale unfolds of a one-night stand, two people who cleave together more out of a desire for a respite from the stultifying loneliness they feel than merely desire itself, the lyrics present a dark tableau worthy of Will Oldham or Johnny Cash, “you wake up in the morning / in an unknown bed / with an unknown girl / you can bite her on the ear / or kiss her where you want / but don’t let her too close“ .

‘Failure #1‘ has a mysterious, ethereal quality. Shoegazing country you could call it (move over Mojave 3!). Hanson‘s voice floats above a languid tune, quietly singing of the emotional disconnection he has with those around him and a desire to escape, to leave his disappointing life behind him, “to be somewhere else / a totally different town / to never to be seen“. Heart rendering and sublime, if you, like me have missed the sleepy-sad anthems of Slowdive and the like, then this comes as a melancholy treat. In sharp contrast, it’s followed by the veritable hillbilly hoedown of ‘Bookstore‘. Weird and bizarre. Fellow Appalachian mountain men, Mercury Rev influence ‘Into the Forest‘, indeed, even Hanson‘s plaintive, tremulous, lilting cadence is similar to that of Jonathan Donahue’s.

The entire album was reportedly bashed out in just one week, giving it a ‘live’ sounding, rough edged feel. It‘s this simplicity that is the album’s own effectiveness.

But still, Norwegian alt-country was never going to look good on paper but this proves that with burning lyricism and a spiky pop-nous, even the most unpalatable can become enticing. For sure, with ‘I’m Coming Home‘, St Thomas serves up a mouth-watering gumbo of smoky folk, yearning country and a sublime pop melodicism. - now that’s good eatin’! And unmissable. Tuck in.