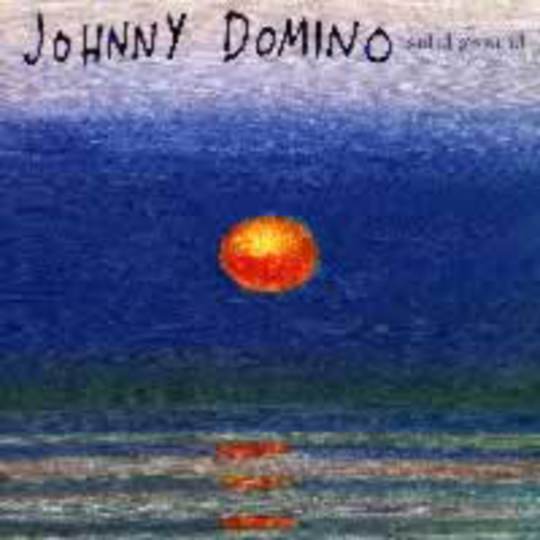 One of these days, a killer Johnny Domino best of compliation will get released. That will be a joyous day. For on every Johnny Domino LP, there are four or five songs of such a high quality, that you're left wondering how they've remained Artists Against Success' most treasured secret. 'Solid Ground' is their most coherent and best produced record to date.

At their best, The Domino exude such swaggering style that it's impossible to imagine any of them ever being sad. 'Yeh Yekcim' (it's not Turkish) provides the LP's first genuine peak, strolling in at walking pace before suddenly bursting into a chorus replete with massed, unhinged 'La laaaa's behind frontman Jim Convery's delirious lead. 'Everybody is watching me', he raps, with evident relish. Always a compelling live performer, on 'Solid Ground', the singer has turned in his most assured set of vocals to date.

The opening title track is distinguished by a trademark, snakehipped Steve 'The Magic Man' Woodward riff and brother Giles Woodward's damn good advice to any musician who's hitting the skids; 'And when I'm feeling lonely, full of that sad, sad stuff / Put down my instrument, slowly but surely just back off'. How many indie complainers might we be spared if that became law?

Which is whay it's a disappointment when they ignore their own advice and include 'Second Greatest' early on in the LP. This, frankly, is a depressing trawl through the group's failure to reach a wider audience. 'You'll never hear this', croons Convery, Giles Woodward reinforcing the self-defeating message by chiming in with 'We're the second rated'. This is nonsense. Kurt Vonnegut's fictional 'hero' Kilgore Trout may have travelled to an Arts Festival to represent the millions of failed careers in his artform in 'Breakfast of Champions', but Trout was an old man. The Domino are young and must not allow themselves to succumb to such thoughts. The LP would have been stronger had the song not been included. Ditto 'Dutch Girlfriend', nothing better than a studio doodle; a lazy riff and daft lyric are not sufficiently redeemed by strange, see-sawing synths and Giles Woodward's bluesy delivery.

That's as much as I can say that's negative about the record. There are always things on Domino albums that make you wonder where the hell they're coming from and besides, the brief dip is more than compensated for. As soon as 'U R My Oar' kicks in, they're forgiven for all sins. Here is a song which features everything there is to love about this band; composed bass and booming guitar usher you through the verse so smoothly that you feel better about yorself by the time you get to the chorus, which is propelled by The Magic Man Woodward's staggering chak-chakking rhythm guitar and Convery's part-croon, part-backchat vocal. Add a graceful break and a wonderfully controlled outro. Fade into Eno-ish ambience. Wonder what the fuck is going on. Enjoy yourself immensely. Get Johnny Domino, who are strong.

I'm tempted to describe them as an English cousin of Pavement, but should note that Steve is a cleverer guitarist than Stephen Malkmus, who indulges himself too much these days. Woodward's rhythm attacks are jagged, pointed and fill the songs with intelligence and dynamism. Of course, Pavement had enough about them (primarily, a record deal) to avoid crises of confidence such as 'Second Greatest, but I'm pushed to think of anything as pretty as 'This Mountain' in the Pavement back catalogue.

The two bands share a crooked, bloody-minded view of pop music, but I doubt that the JD's would claim any influence from their American cousins. Still, anyone who enjoys the Malkmus take on life will find plenty to admire in 'Solid Ground'. Less idiosyncratic, more focused groups would not have made LPs such as 'Solid Ground' or 'Wowee Zowee', both albums with a track or two too many. However, in time, you find yourself enjoying even their most patently flawed tracks and just going with the flow.