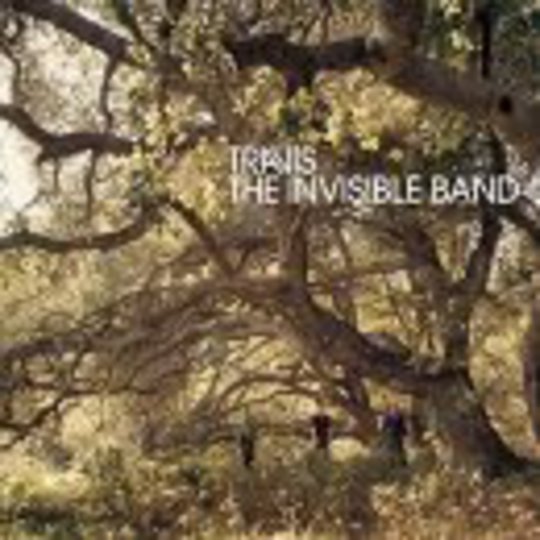 Is it a bad thing that the new Travis record sounds dangerously close to their last, "The Man Who"?

With the success of "The Man Who" the Scottish quartet blend of poppy melodies mixed with that rock guitar sound helped them break into the commercial limelight. So this time around they bring in Radiohead producer Nigel Godrich but when they reach that fork in the road, having two choices: The first they could be like Radiohead and do something totally unexpected and different or the second stay on the same path as the last LP.
They seem to be happy to pick the second.

Though "The Invisible Band" lacks a lot of the hooks that made "The Man Who" such a success, it does have it's fair share of memorable moments. The first single 'Sing' is an infectious summer song complete with banjo intro. 'Side' seems like something from "The Man Who" sessions.
The acoustic rattling of guitars mixed with the lyrics "grass is always greener on the other side/the neighbour's got a new car that you wanna drive" will leave a familiar taste in your mouth. 'Pipe Dreams',* 'Flowers In The Window', *'Afterglow' and 'Follow The Light' all follow this happy formula.

There are times when they push themselves a little outside the traditional Travis mold. With more of these moments is when this album could have gone from just good to great. Hearing Fran Healy's heartwarming falsetto voice on "The Cage". gives you goosebumps. Album closer 'The Humpty Dumpty Love Song', complete with strings backing the fairy tale love song lyrics is beautiful. As the song builds to a stunning close it only gives you hope that the next record will be a little less of the same and more of the different.

When it comes down to it, the album shows why Travis are so popular.
They're a simple band that writes simple songs about making the ordinary sound beautiful. There isn't anything wrong with that, but sometimes too much of the same thing is tiresome in it's self.