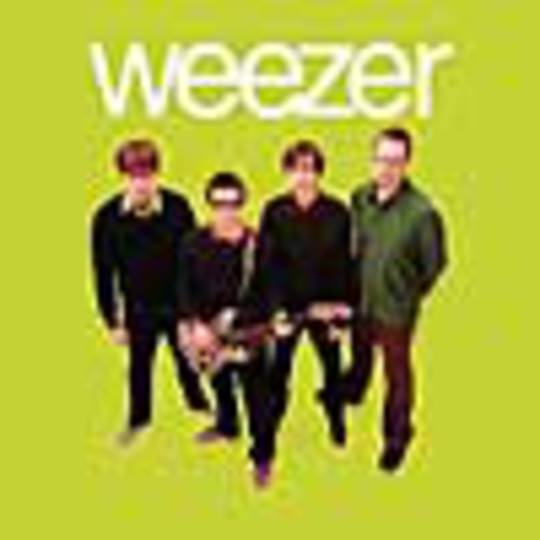 The fact that Weezer are back is a reason to celebrate in itself. After creating the two greatest pop-rock records in existance it's time to add a third. One listen to The Green Album has you eating out of Rivers Cuomo's hand just like in the past. For the un-educated amongst our readers it's a case of this, if you like Green Day, Ash or any other band that attmept to create feel good music for us all it's time to purchase not only this album, but both of Weezer's previous records. Rivers Cuomo is one of the greatest song-writers that has picked up a guitar. Anyone who can with hold the charms of the Geek-rock quartet are obviously made of stone and complete assholes. Sorry to be blunt but it's the way it is. God I think the sun's finally taking it's toll.

From the second The Green Album kicks off with 'Don't Let Go' it's blatant that Weezer are in the sort of form you expect. All soaring bouncy guitars, sunshine drum beats and the sort of vocal melody that has already taken permanant residence in your memory base. It just doesn't even begin to slow down throughout the course. My god I could go on and on about how great this record is and i still couldn't get close to how amazing this is. In fact I think I will go on about how great this is. 'Photograph' is all 1950's happiness and brings back shades of 94's outstanding 'Buddy Holly' and as Cuomo describes his 'Island in the Sun' who wouldn't want to join him there. I bet that song could create Jamaica in a cold wet Bogna Regis. Cuomo also has the knack of being able to relate to everyone on a personal level with his youth-driven lyrics. Whether nodding back to your past or currently living it up, Cuomo can tell you how it is. You don't know whether to worship the guy or wish him a Mediterranean Curse with being able to effortlessly churn out hit after hit with such obvious ease. Any song writers out there will sit there and think 'Why didn't I write that?' after every single song that The Green Album has to offer. It's hard to believe this band formed during the depressing era of Cobain and his depressant army. It would be easy to bitch about this album being short at just over 30 minutes but when the record is of this quality you don't want to complain, simply sit back and listen to the catchiest collection of songs you will hear all year round.

This really should have been a two word review of 'Enough Said' cause once a record has the Weezer title on it we all know that it's going to take over our stereos throughout the summer....and winter and any other time you need to have a smile whacked on your face with maximum force. Weezer write superb songs with natural ease. Get an Ice cold drink, Chill out and play this album until your neighbours are deaf. That and hope the weather holds up. Welcome back and don't leave it so long next time.