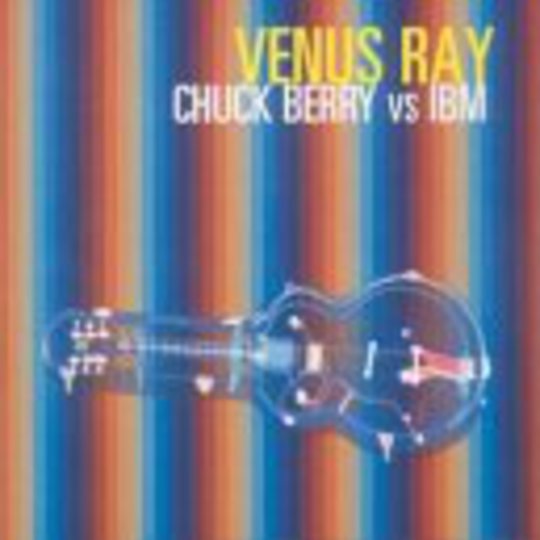 The recording of Venus Ray’s debut LP, Chuck Berry Vs IBM, was not an easy process. Punctuated by a reported ‘succession of medical emergencies and unexplained technical glitches’, the scars left are distinctly audible on the finished album. The record is awash with curious background noises and unidentifiable distortions of sound, many of which seem to be the fault of flaws on the master tape, rather than any intentional recording. Fortunately, this is entirely in tune with the bruised and atmospheric beauty of Venus Ray’s music.

The band formed in 1998, when marvellously named vocalist and main songwriter Diggory Kenrick brought together a five piece group of experimentalist London musicians. Amongst these was Barney Oliver, who’s past form included a bizarre (and possibly somewhat questionable) sonic experiment using only bat detectors. But whilst Chuck Berry Vs IBM does display a willingness to innovate, a reassuringly strong pop sensibility underlies the whole of the record, ensuring that it never comes close to unlistenability or self-indulgence, as may have been threatened by these roots.

Opener Chewing Gum takes the warped and immense electronic crescendo of the average Suicide song, and condenses it into 28 seconds. It sets an unfulfilled agenda for an assault upon the speakers, but nonetheless is a powerful and satisfying way to begin proceedings. Elsewhere, the use of electronics is much more forgiving to the listener, such as in the popcorn synths which help songs such as Voyage to the Moon and the title track to bounce along so pleasingly. Both see fizzing keyboard flavours merging with classic blues guitar progressions to offer a previously uninvisioned future for rock ‘n’ roll. And it’s as much fun as it should be. Surf’s Not Up even manages to turn Lou Reed’s Metal Machine Music into The Surftones in just over a minute and a half. This is something that can only be described as being as cool as fuck.

It’s a temperamental joy, however, and as might be expected from a record which suffered such a traumatic birth, there is also an elegiac side to the album. And it’s on more sullen songs such as The Loneliest Boy on Earth and Troubletown that the tape echoes and recorded claustrophobia make most sense. On every level the record is fragile, so that when everything does fall apart once in a while entirely understandable. The wonderful barbershop-style harmonies on Bad Dreams are so delicately formed, that the song can’t help but descend into howling feedback after their delivery. It shouldn’t make any sense, but it’s a beautiful chaos Venus Ray create, and one always tinged with some level of humour. The type of angst expressed in a song called I Wish I Was a Car,, although in this case genuinely affecting, is never going to be one that takes itself more seriously than it should.

Despite labouring under one of the worst titles for a long time, Chuck Berry Vs. IBM offers a delightful and entirely contemporary revision of guitar music’s rich heritage. It’s almost unique, with only hints of the likes of Big Star as more recent reference points. It’s alive, and at least in a little way, it’s also rather special. Rock ‘n’ roll is here to stay.