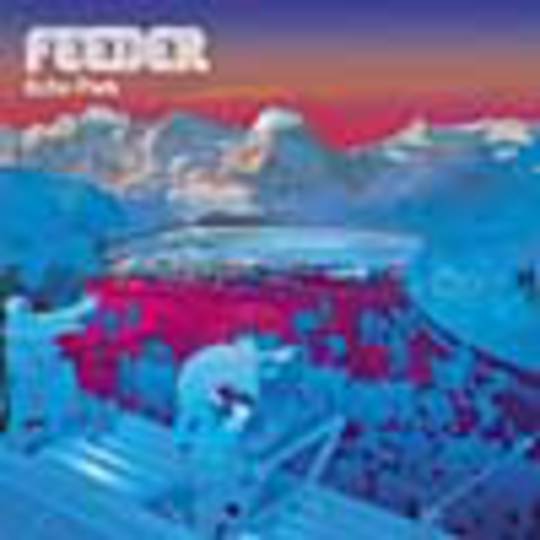 The success of Feeder has been well overdue. Since 1997's 'Polythene' Feeder have been ready for the big time, but being criminally over-looked by Britain's record buying public. After 1999's 'Yesterday Went Too Soon' opus flew over the heads of so many, you wouldn't have blamed Grant and co. for jacking it in through sheer frustration. Well, thank the good lord above then that they didn't because Echo Park is a record that we have been dying for a British band to make for the last few years. Well crafted, thoughtful songs with a big heart even if the words are..... well, bollocks (See Grants 'Give me Nurofen Plus, Feels like I've been hit by a bus' refrain in 'Under the Weather').

The record does feel as though it's on dodgy ground at it's beginning, opening with the lackluster 'Standing On the Edge' but the ship is soon steadied by that crucial hit single 'Buck Rogers'. It's with this top 5 effort that Feeder have provided the platform for themselves, pulling in more punters to succumb to frontman Grant Nicholas' knack of writing some of the catchiest hooklines in rock at this moment in time. Thankfully the rest of the record is able to meet the said standards, with most tracks being potential singles. The pop-genius of follow-up single 'Seven Days In The Sun' and terrace chorus shown on 'We Can't Rewind' proving particularly poignant. But it's on the searing 'Oxygen' that Feeder raise the stakes, building from an ambient psychedelic intro through to a mammoth anthem with Grant's desperate, longing vocals showing another side to his already incredibly versatile vocal range. And it's this charm that make Feeder such a crucial addition to the British rock scene. In Grant Nicholas we have one of the world's most gifted songwriters and even if his lyrics leave a huge amount to be desired, the man feels every single note of this record from start to finish.

Feeder have once again delivered the goods, showing all the best elements of British song-writing being emotional, charming and simply irresistible. And when Grant Nicholas screams 'I think we're gonna make it' there are few and far between who'd argue with him. Quite simply, no band on Earth deserve this success more than Feeder.