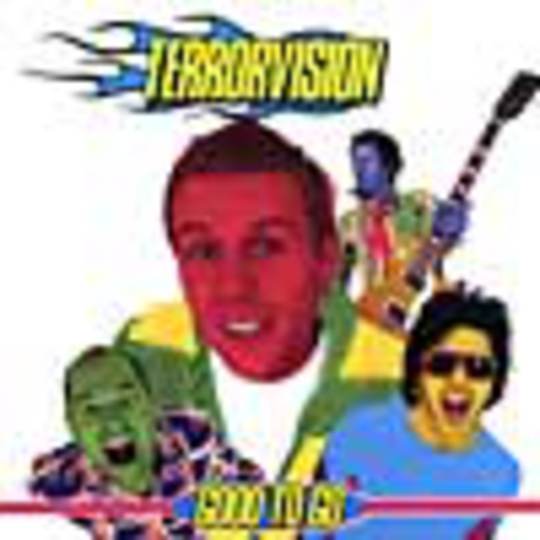 Almost everyone has a favorite Terrorvision song. Whether it is Oblivion or Perseverance or Tequila, most tend to love Bradford's finest for a reason, and that reason is usually their brand of catchy pop-rock songs. After seeing Terrorvision live twice last year, I had got a taster of what was to come and you could see that the tried and tested formula hadn't diminished.

Now, I am not going to go on about how they got dropped by the old record label or Tony's court case, if you want to read about those, read Vic's interview with them elsewhere on the site.

From first track, the 1st single off the album 'D'Ya Wanna Go Faster', the tempo is set. The almost spoken verse leads into a fast, uptempo and highly infectious chorus asking you the question 'Do you wanna go faster?'..... and as we all know, with Terrorvision, we will do whatever they say.

Next track, 'Come Back Beanie', harks back to the 'Regular Urban Survivors ' album and sounds a bit like 'Hide The Dead Girl' with a few additions.

Now for what I think is THE Terrorvision sing-a-long of all time. 'Friends & Family' is a huge 2 fingers towards the aforementioned record label incident. From the jaunty and cheerful verses to the huge chorus sing along 'THERE'S A PARTY OVER HERE, FUCK YOU OVER THERE'.... so, swearing isn't big or clever.... but in the context Terrorvision put it in, it doesn't seem like swearing, more of a cheerful taunt.

'Sometimes I'd Like To Kill Her' had Tony doing a 'Josephine' style song again. Slow and quiet-for-Terrorvision verses and brighter choruses.... it is one of those songs you sway to at gigs in-between the high-octane songs.

'Alone' is one of the most rocking songs on the album..... sounding like 3 Colours Red or Symposium in style and stature.

'Fists Of Fury' starts off as a country hoe down with scratching... banjo-tastic kids!!! It has an American country song feel to it if not for the drumming... and the obligatory 'Do do do do' Terrorvison do so well.

'Unhappy Millionaire' is one of the weaker songs on the album, with Tony singing about how being a millionaire ain't so great 'I'm so unhappy, I'm a millionaire. I got a golden tooth and the perfect hair'. The vocal combination of Tony and Hannah Robinson just doesn't work for me at all in the song but on the other hand, it doesn't sound like a typical Terrorvision song... something the band get accused of constantly.

'Days Like These' is one I have difficulty describing. 'Simple man, simple needs, born in New York lives in Leeds' gives you an idea of why. It is Terrorvision doing their brand of rock and I have a HINTING feeling this could be a single at some point.

'From Out Of Nothing' is a strangely touching song. It isn't expected for Terrorvision to produce songs like this but I am glad they did. It sounds like the Richard Marx style ballads over a piano. A real rawk ballad.. you can see the big hair and tight trousers now.... Meatloaf would kill to be able to write songs like this still. It even has a Moody Blues style organ at one point... yay!!!

?Goldmine Jamjar? a suitable ending point, notably with the inclusion of the line "The last song that I ever wrote". The track acts as some form of back grounding to the preceding numbers, wrapping up all that has previously been encountered and compressing them in a multi-faceted 4 minuter. It ambles along at a comfortable yet almost lazy pace with the lyrical rhythm disrupted by the stuttering of broken and fragmented guitar riffs; before it all descends into a instrumental outro fading into the distance.

Whispers "ssshhh it's a secret"- Sorry to ruin the surprise but I though this little number, tucked away after minutes of silence simple warranted a mention. It Opens with Latino style and cheesy guitar meanderings that all seem to compliment the light undulating tittering on percussion. With both harmonizes yet vocal simplicity used to great effect throughout this cheerful little number will get you singing along right from the onset!

And here we are, the 5th Terrorvision album in the can and as it says on the tin, 'Good To Go'. It is happy and funky and typically Terrorvision?. This is one band that are the epitome of the phrase "If it isn't broken, don't fix it". If you are looking for something new that you haven't heard before, this isn't the album for you. But for the Terrorvision die hards? It's another great album from our favorite fun loving guys.

N.B - A special thanks to Vic Bird who helped me complete this due to exceptional circumstances