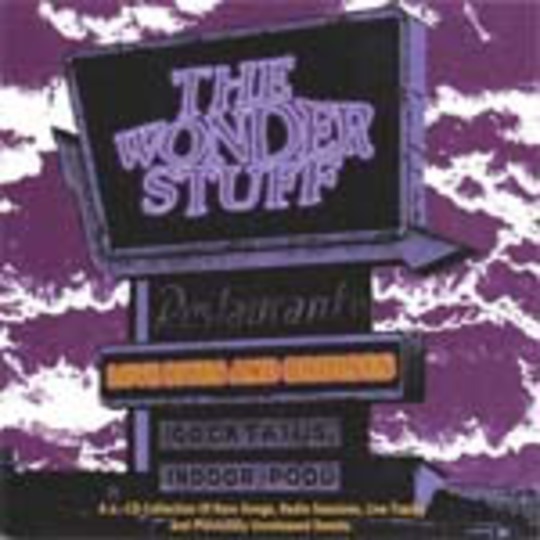 When the Wonderstuff split at the height of their powers in 1994 after a triumphant headlining appearance at the Phoenix Festival, they chose the right moment to go out. They didn’t overstay their welcome in the way that Carter USM or PWEI did, by playing to ever decreasing crowds while the new indie-kids flocked to see blurrgh ,oashite and shit 7. They nicely managed to escape the overshadowing behemoth of oasis and britpop, yet somehow, they preceded it all with the madness-jam hybrid jauntiness of “Size of a cow” and inadvertantly gave birth to the beast oasis and blur are still trying to escape, but in doing so their imitators only show their own limitations. The Wonderstuff made a unique sound that’s timeless, owing as much to Madness as the Jam, as much to the Band and Bruce Springsteen as it would to Echo & the Bunnymen – yet better than any of the above. Somehow when it came to the critical plaudits, many reviewers would rather suck the arse of a Gallagher than give miles hunt and co the credit they deserve, especially after a falling out with the music press.

The Wonderstuff, along with PWEI were the pinnacle of the indie culture in the late 80s’ and early 90s’, and the recent batch of reissues of their 4 studio albums only goes to show why. This compilation of B-sides shows in many ways their more off the wall moments, but in doing so it doesn’t sacrifice the quality of the songs. Whilst it may be brief (35 songs in 100 minutes across 2 CDs’…there’s certainly another 60 minutes of material that could easily be squeezed on these 2 discs, but of course, that way, they wouldn’t get you to repurchase all the remastered CDs’ again would they? Crass commercialism at its best?), it - like the l’oreal advert - worth it. Like all compilations of your favourite bands, I’m sure you always think you could do better at home with c90, but the fact of the matter remains that the tracks on this CD prove that the world “b-side” and “shit” should never have to go hand in hand, especially with the stuffies.

From the opening innocence of the long lost track from the debut Ep “Down Here” to the final new unheard studio track “Trim your sails”, this album is full of musical gems. The previously unheard demos of “How High” and “Dear Diedre” show their naivety and enthusiasm untainted by the world weariness and cynicism that would sometimes show though later on; The previously unreleased new version of “A wonderful day” is an eye opener, proving how the Wonderstuff could write hit singles effortlessly in their sleep, or so it would seem. The heartbreakingly beautiful reading of “Can’t shape up” is beyond words and “Hit by a car” remains one of my all time favourite tracks by any band ever : all delicate piano’s, sarcastic vocals that rewrite “Girlfriend in a Coma” and show why the Wonderstuff deserves every plaudit they ever received. Simply magnificent, and the fact that this track was canned for 4 years after its release is bewildering beyond belief. Rounding off disc 1 are two rare radio session tracks, including the version of “Maybe” from KROQ acoustic (though this includes a mastering problem with the beginning of the paranoia mix of “circlesquare” at the beginning) and “sing the absurd”.

The second CD is even better, if only because some of the best of the earliest b-sides were included on the remasters rather than on this compilation. “Professional disturber of the peace “ is venomous spite of the most eloquent kind and “Unrest song” sounds like the sort of songs that other bands (like the Happy Mondays) would crawl over broken glass to make an a-side. It just goes to show when the Manics ripped it off wholesale for “Prologue to History” , b-side of “If You Tolerate This”. All while remaining jaunty as hell. However, the latter part of the 2nd disc is made of live recordings from their final tour of the UK, and with recordings as clear and crisp as these, its amazing an official live album never made it out in the bands lifetime. Simply, the playing is spot on and it sounds like the best gig you’ve ever heard. The cover version of the Waterboys’ “Fisherman’s Blues“ only highlights how the band had changed: from jangly indie pop to fragglepop, to folky tinged fiddle based acousticness, all of which made sure the Wonderstuff had a musical palette far in excess of their contemporaries. Who else would have merged the rocking guitars and fiddles without descending into parody or being called New Model Army? (and btw, the Levellers won’t count). No-one else. It merged perfectly. “10 Trenches Deep” only proves this. Closing off with the naive “ruby horse” and “dizzy” live from their final appearance at Phoenix, this band never sounded better or more together. They knew the time was right to split, which is why we missed them so much, and musically they were the best band of their era.

What’s important is that whether you never knew it or not, this band defined an era and every single they made was a gem, without exception. Listen to this CD and discover why, and discover why they deserved to the biggest and best band of the 90s’, until two brothers from Manchester came along and destroyed the British Indie scene for good by taking the template Beatles + Zeppelin = money. These days may never return, but at least we can celebrate. If you get the chance, go see em. If not, buy the albums and find out why