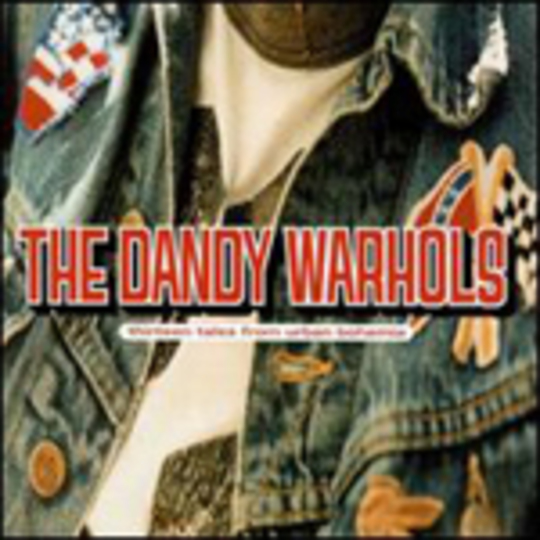 The Dandy Warhols, what do we know about them? Well, apart from that ‘heroine is so passé’ last junky tune, some publicity regarding their lesbian keyboard player who's known as a bit of a shirt-lifter, various alleged clichéd rock’n’roll acts and um, they’re American... I guess not very many of us know very much about them.

So, album number two, ’13 tales from Urban Bohemia’ should be our incite into the minds of the ‘Warhols. The album includes past single ‘Get Off’ which instantly stuck in my mind like a bag of gooey sweets in a paper bag on a hot summers day. Also the equally catchy, current single ‘Bohemian like you’ that could be described as Elvis jamming with Bowie, or something strange like that. Beyond those two tremendous tracks, this album has a lot more good stuff going on.

‘Godless’ opens this album with a dynamic acoustic guitar, combined with a little wind and what sound like Moogs. Lyrically, Courtney (who’s male by the way), lays the thought foundations for the rest of the album. It appears to me be that this is the opening insight for the album, linked with atheism in our current society, praps pushing the overused rhetorical question, ‘who is your God?’

Track two, ‘Mohammed’ is cohesively the next step in a slightly parallel direction. There is a kind of different - Clint Eastwood enters a dusty one horse town - mellow vibe going on with this tune. The vocals are almost washed out and made so that they’re hard to comprehend, much like a lot of the darker Trance mixes that are around at the moment.

‘Neitzche’ is next and again, grows from the past tracks with a little more noise but a much bleaker and slightly rawer edge, especially within the words. The layering of noise becomes much more apparent on this track, with plenty of delicious production touches which make you feel like you’re in some kind of drug induced daze, or perhaps that’s because the Dandy Warhols want you to know what it feels like to live in their world?

‘Country Lover’ does sound like an Eels track on first listen although it's got a much cheesier edge than the rest of 'thirteen tales..'. I think it’s the cheeky mid-west samples of horses and bird noises, along with hand-claps and what sounds like a banjo instead of a geetar, that make this sound like some kind of Disneyland background tune.

Still on the subject of birds, the next track ‘Solid’, can only taken influence by the children’s party favourite, the birdy song - nuff said.

‘Horse Pills’ is at the heart of this album and is a story, purely and simply about sleaze, “rocking on the horse sized pills, sometimes you feel like Moses,” says it all really.

If, like me, on the first listen, the Dandy Warhols have lured you into their world both musically and mentally, then in comes this albums sing-a-long anthem ‘Get Off’ which should assure everyone and anyone of their genius. A song about either sex, drugs, rock'n'roll all three. I’m not totally sure but then again, those three niceties are ongoing throughout this album and with those alleged stories surrounding the band in the media, I can't be too far from the truth. The good thing about this track is if you don’t want to think about its meaning, it should get you jumping around like Bez from the Happy Mondays at your local indie club at some point in the near future.

…And then the album pace drops. In the aftermath of getting off, in comes a tranquil comedown in the form of ‘Sleep’. This song could cure insomnia around the world, given half a chance and for once, I don’t mean that in a derogative manner. ‘Sleep’ is as horizontally laid back as a song could ever go, for me, without a hint of depression or the sense of it being remotely uninteresting. This song, has captured the essence of closing your eyes and floating away with your imagination. The only thing this tune is lacking the trail of z’s coming from the speakers (unfortunately, we’re not that technologically advanced to do, as yet).

Then, for anyone who fell asleep, ‘Bohemian like you’ hop, skips and jumps from the speakers, complete with cheeky synth sounds and Hellraiser-style magic box hooking ‘ooooh, oooh, oooh’s!’

‘Cool Scene’ takes the Bohemian (non-conformist) idea from the albums title and lyrically seems to slay the *it* guys and gals, plus the people caught up in all the other cool clichés which detract from being an individual [see also: iDLEWiLD ‘you just have to be who you are’, Scarfo ‘Elo’ for past examples on this subject].

A bit of ‘Shakin’ follows, which sounds similar to ‘Bohemian like you’ which isn’t entirely a bad thing and there is the addition of some DJ scratching, which is the sort of thing you’d expect on one of Becks albums.

‘Big Indian’ makes me think of Mercury Rev and Pavement, which I’d class as a good thing, but I’m sure there are people who would disagree about that.

For the last track, the Dandy Warhols sum up the rest of the album, as you do at the end of albums, with ‘The Gospel’. Drifting on like a seemingly endless summers day this song does quite contrastingly deviate from the idea of not having a care in the world. The only problem I see with this track is that Courtney, the bands voice says “I will take you there” but in this claim I don’t think anyone is sure, even after 13 insights into the mind of the frontman – even as the last strum rings out - where he would like to take us. I’ve come to the conclusion that this album is meant to be like ‘American Psycho’. We are left to make up our own conclusions about what was said. The albums satire mixed with the honest opinions of the band do make the comprehension of the words a lot trickier – if not impossible.

Above all, it seems to me that the Dandy Warhols have tried to give us their heart and a piece of their soul, all for the bargain price of a CD. Maybe that sounds ridiculously pretentious but this is an album, which opens with a track called ‘Godless’ and closes with the ambiguous line “I will take you there,” on a track entitled ‘The Gospel’ so how else can I describe it? Maybe the media should have spotted another person whispering they’re bigger than god? Or maybe, like the majority of journalists, I’ve been looking too deep into the words and it doesn’t really matter what’s being said or whether I’m right or wrong because musically, this album is another giant evolutionary leap for humankind and should be praised for that reason alone.