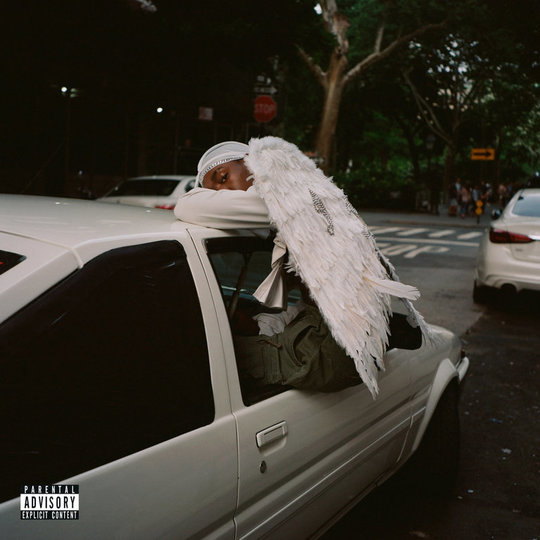 In 2016 Devonté Hynes, the musical polymath behind Blood Orange, made what felt like a definitive statement with his masterpiece Freetown Sound, a warped, funky, and soulfully metatextual analysis of black identity in America. Not only was it glorious, intelligent and beautifully performed it was also thorough, pulling together cross-cultural threads, documentary snippets and a school-bus full of guest performances and lacing them with the same stylish, occasionally jittery R&B hip hop he applied as a producer to Solange’s True. It was a cool and compelling accomplishment, but did beg the question: where would Hynes go from there?

The answer is both further out, and further in. Negro Swan, his fourth album as Blood Orange and sixth as a solo performer, sees Hynes turn his attention to the very personal. He’s said the album is about ‘black depression, black anxieties and the ongoing anxieties of people of colour’, and while that has implications on a macro scale, the prism through which we approach those issues is the experience of the black, queer, anxious Dev Hynes. While Freetown Sound felt very American and specifically very NYC in its approach, Negro Swan has Hynes dredging up his past as a bullied Essex school boy, the young black outsider who played in the orchestra and metal bands, before finding his identity through nu-rave, nu-folk and New York. Throughout the album Hynes returns again and again to the theme of being ‘other’, from opener ‘Orlando’ which paints a picture of a lonely world ”after school… down and out” where the “first kiss was the floor” to ‘Dagenham Dream’, with its emphasis on isolation and shame, all “broken skin and bloody nose”. On ‘Jewelry’ Hynes front-and-centres his English accent, sounding alien over skittish beats as he sing-talks about being “suited to stay home indoors like a good nigga”, worrying that “no-one will ever appreciate the way you bare your soul to them”, all imposter syndrome and awkwardness. He concludes with a retreat, “Go back to being unknown, relax your hair, tuck your shirt in, put your glasses on, play your guitar”.. Anyone who's ever been made to feel like a an outsider will relate - somewhere inside the superstar producer is the awkward, bullied kid from Dagenham, just as somewhere inside the rock writer is the Leicestershire nerd mocked for ‘talking about Nirvana and Star Trek’ too much. Or maybe you just take away what you put in.

The introversion and the melancholia is only half the story though. There’s a reason Hynes releases ‘solo’ music under collective names like Blood Orange and Lightspeed Champion: He’s a serial collaborator, and an expert in filtering his ideas through someone else and using their energy to make his point. On Negro Swan it manifests in the fierce and erudite voice of trans-activist Janet Mock, credited here as a ‘narrator’. Through a series of interview snippets Mock contrasts the introversion and awkwardness of Hynes’ lyrics with the need to “show all the way up” in spaces you’re not supposed to belong, to not allow to people to tell you you’re “too extra” or “do too much”, to “fully show up as you are without judgement, ridicule, fear or containment”. Iain Isiah finds hope in spirituality as he splashes his beautiful falsetto across ‘Holy Will’, while Georgia Anne Muldrow reminds us on ‘Runnin’, that the clouds will eventually clear, that this too shall pass. “Hold on”, she sings, “you’re gonna be okay, everybody goes through it”.

Hynes plays his collaborators like instruments, allowing their natural tone to enhance his vision. It says everything that he takes his two biggest hitters and sets them against type: Puff Daddy, a man who dick-swung through 25 years of hip hop history is downbeat and reflective, asking between all his “uh!”s and “Yer!”s “what’s it going to take for me to not be afraid?”,while A$AP Rocky (who is hard to take seriously ever since Liam Gallagher dubbed him ‘WhatsApp Ricky’ on Twitter) deals with sexual inadequacy and the women he couldn’t handle. Toxic masculinity will always undermine the biggest of egos.

All of this is reflected in tunes that warp and slide uncomfortably, guitars that never seem to stay quite in tune, beats and hooks that dissolve before they resolve, Dev Hynes’ vocal always naked and vulnerable, with no effort made to hide his insecurities with his own ability. Every note and sonic decision coded into the message: It’s hard to be alone, it’s hard to do your own thing, but it can also be very beautiful and ultimately empowering. It’s telling that the album closes on a note of hope: “The sun comes in,” sings Hynes, “my heart fulfills within”..