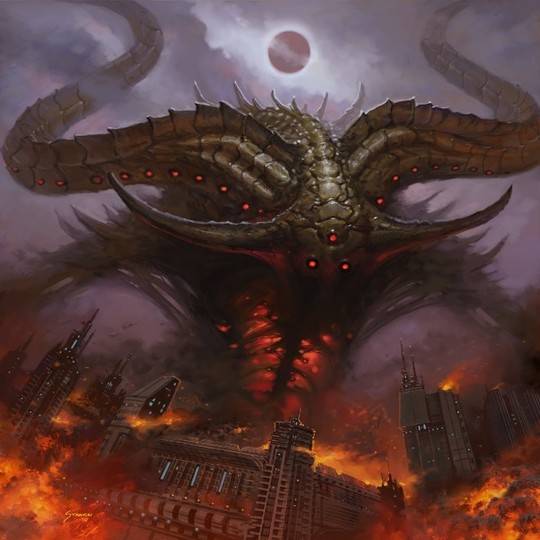 Having hit the twentieth (!) year and album mark last year with the reasonably downplayed Memory of a Cut Off Head John Dwyer's (formerly Thee) Oh Sees it seems are ready to enter the next chapter of their storied career. Previous keyboardists and vocalist Brigid Dawson made her full-time return to the band on Memory writing much of it with Dwyer, which proved to be a fruitful reunion as she now once again fronts on the band's latest, the prog-rock epic Smote Reverser. Keyboardist Tom Dolas (who played on Memory) has also returned, meaning Oh Sees are currently a six-headed beast, not too dissimilar to the one adorning this album's artwork.

In comparison to Memory's fairly mellow, almost folk rock-esque vibe, Smote Reverser sees the band go in completely the opposite direction, a phenomenon any Dwyer devotee is certainly used to by now. While the album's first single 'Overthrown' and accompanying artwork had some wondering if Dwyer and co and written a full-on heavy metal album, and in places that is not exactly wrong, the reality is this is the band at their strongest psychedelic selves. 'Overthrown' for example while one of the heaviest tracks the band has ever put out, it also possesses a Lightning Bolt style essence to it, helped in no small part due to Oh Sees dual drummers Dan Rincon and Paul Quattrone, though amusingly they do the work of exactly one Brian Chippendale.

Oh Sees have always maintained an ability to turn a track into an aggressively groovy jam, but it is especially apparent here as many tracks are willing to fly off into space at any moment, none more so than the album's centrepiece, the 12-minute plus 'Anthemic Aggressor' though this is balanced out by the far more focused 'Abysmal Urn' following right after. As usual, Dwyer (& Dawson) are responsible for an incredible amount of memorable melody lines and riffs that almost seem super-human to produce on such a consistent level. 'Enrique El Cobrador' and 'C' for instance manage to expertly update the late-Sixties/early Seventies Californian psychedelia into modern times. Meanwhile the slow-burning 'Last Piece' and 'Moon Bog' ground the album to something below hyper-speed for a welcome few moments.

Dwyer's consistency over the past two decades is not to be sniffed at. His incredible ability to keep his well-worn sound stay fresh is no easy task, especially when one is averaging two albums a year. Sure, much of it comes down to writing and recording improvised jam sessions, but there's also a focus and flair that only Dwyer seems to maintain within the modern day psychedelic rock genre, no less their absolute must-see powerhouse live performances, which are really the best way to experience the band. By the time of Smote Reverser's finale 'Beat Quest', it's plain difficult to not be impressed by this insanely talented band yet again – may their reign long continue.