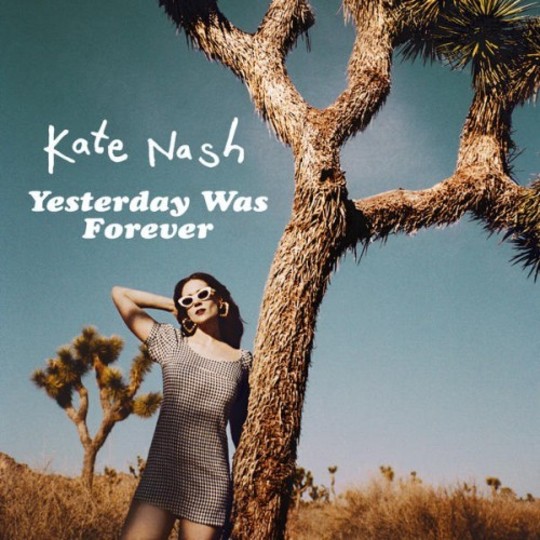 Back with her first full length album release in five years, Kate Nash is here to share her true sound via her Kickstarter-funded LP Yesterday was Forever, which contains tracks already released on vinyl, Nineties pop rock-inspired pieces, confessionals spoken slow, and tracks you could dance to in any club. Most of all, Yesterday was Forever sounds authentically Kate Nash, it's whimsical, playful, experimental and wildly fun.

"I can only be real", "I’m as real as it gets" Kate sings late in the album, and it's true throughout. This is the real Nash- no label interference and no outside input could just be her recipe for success.

'Life in Pink' opens the album with the line "I think about death all the time, do you think that's morbid?" easing us back into the creative lyrical web we love from all of her work, especially debut Made of Bricks which received a tenth anniversary tour last year.

Kate really is a gem of the UK's music scene, and she's north London through and through. 'Take Away''s feel good bubblegum pop interspersed with rock vocals, deep guitar and just a dash of synth are completed by the most relatable lyrics- "I wanna watch Buffy in my room, on the TV and you'll know I'll be smiling when we spoon". It's so British, it's so simple and it's just so good.

No one can tell a story through lyrics like Kate Nash can. It's like she's raided everyone's parent's attic and stolen some battered diary that's covered in stickers and those weird 'S's that kids still write today and turned it into music masterpieces.

The best track, without a doubt, is 'Drink About You', a product of a break-up, but it doesn't feel completely over. Fn it, Nash said 'It's that thing of breaking up with someone and still pursuing it in a subconscious way. I struggle with letting go.' It's perfected indie pop, it's ridiculously addictive and once again, we can all relate (I think I'm over being over it'). 'Drink About You' is an absolute earworm reminiscent of her older tracks, but it has such a maturity and fun air to it all.

There really isn't much to criticise about Yesterday was Forever. From hitting the scene in 2007, topping the charts, winning Brits and touring extensively, to kicking off her thirties with an amazing acting career (in Netflix's 'GLOW', specifically) and a healthy dose of activism, Kate has taken everything she's experienced, been through and learned and created 14 diverse and completely satisfying tracks. This is most definitely the pay off that risk after risk has earned her the best album in her career so far. Nash sees this as the end of a chapter and the beginning of a new one- 'I want people to have fun listening to this album, and to become comfortable with who they are. I know that so many people aren't. It's really painful to look at yourself in the mirror, square yourself in the eye and go, "I like you and I'm OK with being me." But it's so important and it's fucking liberating when you do.'

From the spoken word presentation of Kate's mental health in 'Musical Theater', to a campfire-esque chant in 'My Little Alien', Nash takes us through it and leaves us with 'To The Music Belong'- probably the rawest track in a collection that already says so much.

"Try" she calls out on the final track's backing: it’s to herself, it’s to everyone listening, as despite set backs Kate has faced, like being dumped by her record label (over text of all mediums), has done everything herself and proved what a powerhouse she is. She really has given herself over to the music. The album ends with her softly saying "try" over and over again with subtle piano notes in the background. Nash hasn't just tried to continue her legacy as one of the UK's most iconic, honest and innovative pop sensations… she has completely rewritten it.