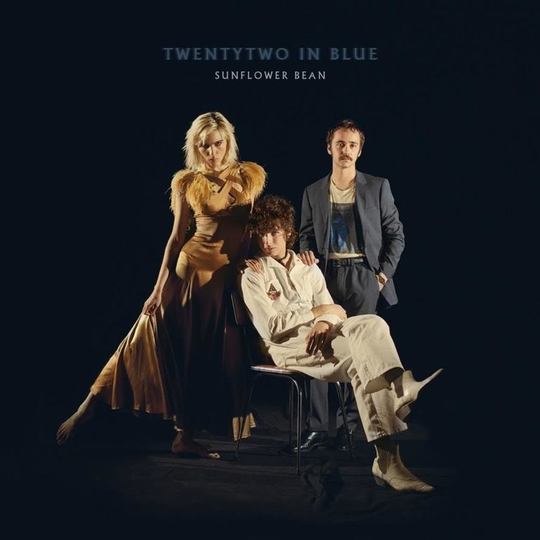 Ladies and gents and otherwise, you wanna hear what nepotism sounds like? Welcome to New York! And welcome, more specifically, to the city where knowing someone that knows someone that knows someone in Impose matters more than any original ideas. Your guides today will be the young’uns of Sunflower Bean, a faceless trio that traded in their vaguely cosmic psych rock from two years back for sun-bleached nostalgia and lyrics as generic as over-the-counter drugs. They’re about to cash in their artistic chips to trot Fleetwood Mac cold cuts and stale glam ham to the festival-going masses, and re-package it as their own coming-of-age young adult novel, Twentytwo in Blue. Who else would better know the shortcuts to far-flung publicity that New York can offer?

Yawn. Whenever I listen to this album, I imagine the kids of Sunflower Bean huddled in their snug apartment, brainstorming a checklist. Quick – what styles and themes can we rip off that will please the most people? ‘I Was A Fool’ bears more than a passing resemblance to the Mac’s most beloved hit, ‘Dreams’ – our intrepid peddlers cut and pasted the exact same intro and outro, borrowed from the same palette, robbed a few of Lindsey Buckingham’s tricks, and even riffed on the same evergreen theme of unreliable lovers. Yup. Everyone loves Rumours, so why not engineer yr lead single around its glass bead curtain? Check also ‘small town ennui that climaxes in arson’, via the routine T-Rex imitation ‘Burn It’. Check also ‘non-ironic celebration of the short leash’ via the uninspired Gary Glitter stomp of ‘Puppet Strings’. Check also ‘neo-hippy Velvet Underground fluff on the eternal youth of romance’ via ‘Any Way You Like’. Yup. Sunflower Bean just wanna drive us from trope to trope, and switch up the records in the jukebox every three songs.

But is this a problem, you might ask. I won’t deny, Julia Cumming has some decent pipes; then again, I also can’t deny that the bakeries in big-box supermarkets can spin some decent buttercream icing. The rhythm section keeps the rhythm and sets the ambience, and that’s about all you can remark about it; sometimes, like on the JAMC downer ‘Only A Moment’, I tend to forget that the bass guitar is even there. And ‘Memoria’ at least conveys a genuinely bittersweet conflict between the growing daughter and her helicopter mother, a clean break too often simplified in the typical bildungsroman story.

Beyond that, though, our flower peddlers serve functional rock music, plastic utensils for rudimentary needs, easily disposable and just as easily replaced. And that’s frustrating, for several reasons – like when part of yr cutlery set includes a “prerequisite protest song”, aka the sunny, Bachman-Turner Overdrive-esque ‘Crisis Fest’. (Hot tip – Ex-Hex did it better.) Sorry, but those flimsy ridges can’t cut through the filet mignon situation on our hands – especially not when the only tangible gripes you’ve got are “been in school for ten years now / 80 grand in debt you’re down”, and a torn-up dress. Those are both legitimate concerns, of course – but then, does this imply that the “we” in the chorus’s rallying cry - We brought you into this place / you know we can take you out - pertains exclusively to college-educated cis women? See also the pseudo-psych ‘Human For’, and the rather clunky refrain ”I don’t need your religion”. Atheism as radicalism was really only cool/shocking in yr hunky dory high school years; who’s forcing heterosexual Cumming to abide by fundamental Christianity, anyway?

What concerns me most about Sunflower Bean, though, is this: at the end of the day, I can’t say I detest Twentytwo in Blue. I wouldn’t be caught dead cranking this in my car, but I must admit with a grunt that some moments are kinda nice. That’s the crux, though – why did the hype machine settle on this lacy doily, when so many other artists in less sought-after pockets of the world wield sharper knives and stranger forks? The only answer I can come up with is proximity to New York, and thus all the platforms at their fingertips, which can disseminate their vanilla-scented postcards for no other reason beyond their pleasant smell and glossy finish. Will no one return the letter to sender?