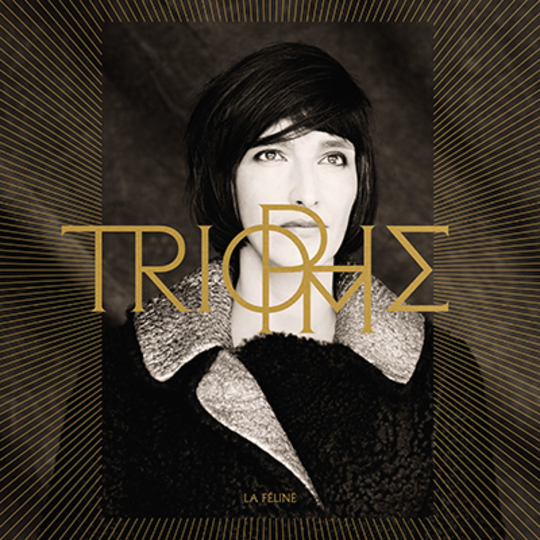 La Féline feel fearless. They feel like the kind of band that isn’t happy unless they are pushing themselves and the audience to new places and this is exactly what Triomphe is. Throughout its 11 songs they recreate France’s chanson tradition, but for 2018. Gone are lithe guitars and melancholic pianos and in their place we are confronted with wonky melodies, conjoined guitars and devastating synths that both hint at the past and the future in equal measure. Somehow Triomphe manages to convert those inner conversations and dilemmas that we all have into full blown cinematic moments.

‘Senga’ kicks the album off with ambient noises of crickets in the evening, a divisive guitar riff and driving beat, before singer Agnès Gayraud’s delicate vocals drench everything in future pop chic. There is a slightly low-tempo, slowed down, baggy vibe to the proceedings. It tells us that La Féline are going to start slow, and are in no rush to show off early on. They want to lull us into a false sense of security before they let rip. The chorus, and most importantly the few instrumental bars before, are the star of the show. You might not understand what Gayruad is singing about, but you’ll happily hum along while you’re trying to find out. ‘Le Royaume’ is a perfect cross over between indie and pop. There is a bite to the music and the delivery feels sugary and light, like a piece of candyfloss that has been caught on an updraft, but when abstract saxophone solo kicks in, it shaves your from your daze and refocuses your ear. La Féline sound like Charlotte Gainsbourg at her formidable and charming best. This is what pop music should do. It should challenge and comfort in equal measure. As the saxophone squeaks and squeals the band swells and creates a standout moment on the album.

The standout track is ‘La Mer Avelee’. It feels like Portico Quartet backing Gayruad’s seductive vocals. Cascading hang drums fall about her breathy delivery. As the song progresses, her vocals are layered and everything takes on a hypnotic motif. On ‘La Mer Avelee’ La Féline have boiled down their essence and created something that not explains them far better than word ever could. Listen to it. It's sublime in its attempt at simplicity, but when you dig deeper you’ll find layer, upon layer of future pop perfection. ‘La Femme du Kiosque Sur L’eau’ is gritty and playful in equal measure. One part of it is a slightly broody and claustrophobic guitar that almost out stays its welcome, the other is light and fun fairground melodies. Combined they create a feeling of unease and malice that is hard to ignore, until Gayruad’s ethereal vocal outro soothes the savage beast. The album closes with ‘Nu, Jeune, Leger’ with a lackadaisical guitar that is permeated with longing and regret. At times you kind of hope that Gayruad’s vocals will fade into the background and leave us with its hypnotic and tender backing track. As far as albums closers go, this has to be up there!

La Féline have released a brave album that oozes with delicious pop sensibilities, je ne sais pas, that at times it defies classification, apart from 'good', which is the only true classification at the end of the day. The songs that ‘Triomphe’ contains jump from pop gems, to jazz freak-outs and back again in the same phrase that at first you don’t have time to realise what has happened, but it is only after repeated listens that you recognise that there is some serious composition, and production, shenanigans going on. Triomphe is an apt title, as everything about this album works, from the luscious opening to the elegant outro, and demands to be played again and again.