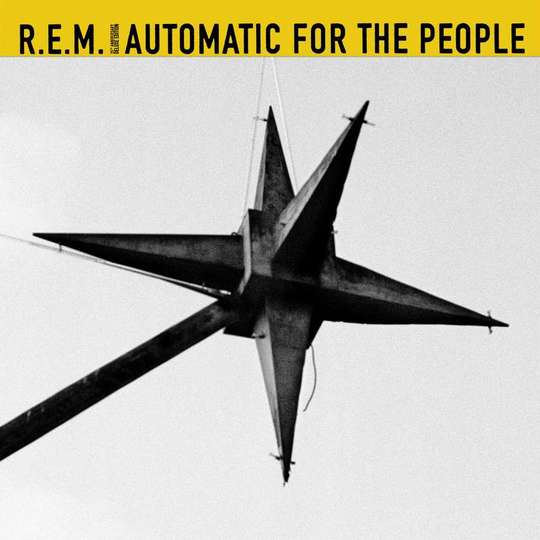 R.E.M.’s eighth album, Automatic for the People , is a monolith. It was the band's biggest seller, their most critically acclaimed record, and the one that would defined them to a global audience: somber, serious and string-drenched, the artwork abstract and monochrome, the name peculiar and evocative.

It’s also the album that marked the final summit of the band’s hitherto vertiginous critical and commercial ascent. Though critics lost their shit over the record, it wasn’t initially on course to top Out of Time’s blockbuster success: the uncompromising, un-radio-friendly lead single ‘Drive’ only did mildly well, and the album failed to top the US chart. Had it not been for its (in many ways wildly atypical) fourth single ‘Everybody Hurts’ belatedly sending it stratospheric, I wonder if Automatic... might have ended up viewed as a sort of bleaker, hipper, tangent to Out of Time, a Nebraska or On the Beach if you will.

Maybe not and it's possible to overstate the case. But I think maybe there’s a disconnect between what Automatic for the People IS and how it’s perceived. Perhaps that's only natural: like the records that preceded it, much of Automatic…'s power comes from its opacity – it's surely the most ambiguous album to ever shift 18 million copies.

I could probably fill up a review’s-worth just trying to dissect out the appeal of individual songs. There are those who dismiss ‘The Sidewinder Sleeps Tonite’ as a piece of fluff in the vein of ‘Stand’ or ‘Shiny Happy People’, bit I always find its strange, childhood-evoking lyrics incredibly moving. That blurted “call me when you try to wake her up” chorus, the musings on tinned soup, Dr Seuss and unanswered phones, the sweet note of self-sacrifice in the “I can always sleep standing up” outro - I have no real idea what it means, but I always felt it was somehow from the point of view of a child cheerily failing to comprehend something profound, perhaps its mother’s death. I sincerely doubt the band would agree with me, but there’s certainly something dark there, a clash between the zippy pace and Michael Stipe’s light vocal and John Paul Jones’s darkly lush, sonorous strings.

Then there’s ‘Drive’, an almost unclassifiable piece of music, essentially a brooding mantra vaguely lyrically indebted to David Essex’s ‘Rock On’, underneath which the musical terrain constantly shifts, flaring up unexpectedly in orchestral waves or, most memorably, a pealing blast of electric guitar. The black-and-white music video, essentially just Stipe crowd-surfing, is strangely violent and disturbing. What’s it about? Again, fuck knows - there’s something in there about throwing off the baggage of the previous generation, some possible reference to the Vietnam and Gulf wars... The lyrics are certainly now broadly decipherable, but the mystery, the sense that you could spend a lifetime with a song and not full understand them, that remains. Scott Litt’s spare, sober production and those stunning John Paul Jones strings – surely the best ever recorded on a rock album – bind together a startlingly diverse selection of tunes. Stipe’s lyrics are cryptic, but his words have an elegant, elegiac poetry that’s a palpable step on from the surrealism of Murmur et al.

Even the more obvious songs - with one exception - don’t feel obvious. ‘Ignoreland’ is exceptionally direct, a rant against the GOP that concludes with the fantastic snarl “I know that this is vitriol, no solution, spleen-venting, but I feel better having screamed - don’t you?” However, as performed the words are almost incomprehensible - Stipe sings through an amp, a clear precursor of the experimentations of Monster.

It only takes to barest knowledge of R.E.M. to be aware ‘Man on the Moon’ is about the surrealist comic Andy Kaufman - but what about him is another matter - it’s a surging, ‘50s-tinged, abstract rummage through his life and death that would serve as the band’s set closer for much of their career. But literal meaning remains elusive (quite probably because there isn't one). The lambent, gorgeous ‘Nightswimming’ can probably be read as a song about, you know, going swimming at night and nostalgia for simpler times, but a close analysis of the lyrics won’t get you any nearer than that; it feels inextricably linked to the song that follows, the harmony-drenched closer ‘Find the River’; both seem to be about searching for something intangible – ‘Nightswimming’ is innocence; ‘Find the River’ is death; water connects them both.

It is ironic, if not especially surprising, that a record still half shrouded in mystery can be defined by ‘Everybody Hurts’, Stipe’s wantonly direct song about teenage suicide. It’s difficult to listen to the album and not somehow see the emotive lullaby as a departure – the longest track on the album, the most grandiose, the only one with no hidden depths or bafflingly ambiguous lyric (the title pretty much is the song, lyrically). Thematically, it fits – it is a clear, powerful, facet of an album substantially about mortality – but it has a cultural baggage to it the other songs have managed to duck.

This doesn't in any way damage Automatic for the People: it is a stupendous work of art. R.E.M. are essentially a band that work on an emotional level, and this is their most emotionally articulate record: sad and painful, but also funny, raging, exultant, yearning. That it was an enormous hit is a slight distraction, 25 years on. But the music wins out.

Speaking of the 25-year-reissue – christ, 25 years! that's the distance between this album and Sgt Pepper's – you kind of don’t need it, but you’re not going to regret buying it. The record was always well-produced and mixed – now some fancy Dolby remastering has made it crisper and more spacious (palpably so, though if you’re going to listen on bog-standard headphones it’s not going to blow your face off).

Various editions with varyingly fancy extras exist. There’s a recording of the band’s only live gig of the era: a 14-song Greenpeace benefit at the 40 Watt Club. Stipe is in drolly enthusiastic form, and though he makes a joke of their ill-preparedness, they’re tight and explosive, from an electric, punk-funk take on ‘Drive’ to a barnstorming ‘Radio Free Europe’.

Then there’s the set of never-before-released demos. That’s a phrase that rarely makes the heart sing, and there’s some definite ephemera here. Stipe was a famously slow worker, and there’s only a single unreleased song with lyrics from him, the fragile, distorted ‘Devil Rides Backwards’ (weirdly it has shades of Up). The pleasant, Mike Mills-sung ‘Mike’s Pop Song’ is the only other finished song – dreamy, retro and slight, it’s nice, but clearly not in the league of the tracks that made it. A real gem is ‘Photograph’: a fine version featuring Natalie Merchant was put out on the charity compilation album Born to Choose in 1993, but Stipe’s original lyric about the contemplation of an old photo of an unknown woman is stranger and stronger (it’s just a shame he didn’t finish it – there’s no words to the second verse). 'Eastern 983111' is just a chorus, but it’s a tantalising hint of a song that might have been, a sort of bleaker cousin to Out of Time’s ‘Texarkana’. Elsewhere most of the interest lies in tweaked versions. A version of ‘Drive’ with huge, ominous toms, has something, as does ‘Wake Her Up’, a loose, raw, string-free earlier incarnation of ‘The Sidewinder Sleeps Tonite’. If you’re a real nerd, you might find some of the lyrical changes interesting: the autumnal ‘Sweetness Follows’ – here called 'Cello Scud' – has more direct words in demo form, and seems to be explicitly about a divided family squaring brought together by a funeral ("distanced from one, blind to the other, yeah we were altogether lost in our little lives"). You don't need this stuff in your life, but it's eminently worthwhile if you're into the band.

Is Automatic for the People R.E.M.’s best album? It’s a best R.E.M. album, and feels like the culmination of something: the band would spend rest of the Nineties putting out weird albums that all variously feel like a reaction to the success of this one. It is richly human but it is also a monolith: for the band, for us, for past, for future, for the people.