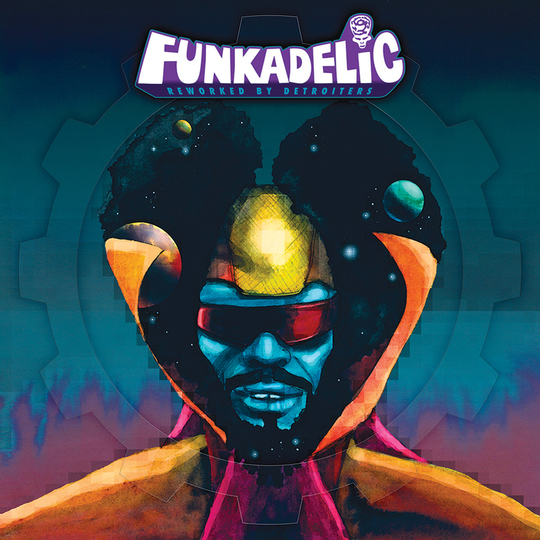 Funkadelic Remixed By Detroiters is a fairly self-explanatory title – getting new generation Detroit musicians to remix some of the classic hits of George Clinton’s other, weirder band Funkadelic. It’s a good album. There is a lot to work with. The final BMG Dub mix of 'Maggot Brain' captures the complexity of the textures and the patient instrumental sections – though it could have taken it further into a kind of hypnotic dub state to differentiate it more from the original. Anything could have happened, and I expected to hear some pretty gnarly hard dance with long psychedelic sections and simplified funky extracts woven into epic crescendos. One track really successfully met my expectations, the Anthony Shake Shakir and T-Dancer remix of 'Standing On The Verge'. It sounds hard, it sounds driving, it sounds like the kind of song you could clean the windows, rob a bank or balance a budget to. This is an excellent track because its completely different to the Funkadelic style, has a really hard dance rhythm and yet uses the Funkadelic motifs enough to be recognisable but not so much as to be lazy.

Music from Detroit often sounds like it has come out of nowhere, but this album in general is a bit more self-conscious. There are a number of tracks which sound a little cheapened by the remix process. 'You Can’t Miss What You Can’t Measure', remixed by Alton Miller, maintains general tempo but adds some high pitched modern synth effects offset by baritone vocals. Then you have the Ectomorph Stripped and Dubbed remix of 'Looking Back at You' which has quite a bit of weirdo waa waa going on, like someone kept turning the knobs all the way up on the Korg Wavestation. 'Undisco Kidd' is a pretty quirky track, one of the few with an attempt at anything more than a chorus. All these tracks heat up the P-Funk concept so much it almost starts to melt.

Apart from 'Maggot Brain', there are a few tracks, like the Moodyman mix of 'Cosmic Slop', which really beautifully captures what made Funkadelic special, the slightly weirder take on music and vocals, influenced more by psychedelic and hard rock than disco and marching bands. The comes closest to capturing the psychedelic tones of the earlier albums. 'Music For My Mother' the Andreas Wo mix also has a more subdued take on the typical funk lines, so that they sound a lot more progressive than the forced cheer of some of the other tracks, especially with the riffy guitars. 'Let’s Make It Last' by Kenny Dixon Jnr shares these tendencies with lots of guitar riffs from the outset.

Not all the tracks that I think successfully execute this concept are super languid. 'Let’s Take It To The Stage' has a pretty nice hook as well and all the signature P-Funk trills. It also moves through several transitions, while this kind of song structure is more typical of experimental or psych music, this is clearly a more commercial dance track, but one with a bit of twist.

Overall this is a solid little album, however I have to continue to recommend everyone to listen to the original albums in full because they are amazing and continue to capture a way of producing music which is much rarer today, longer formats which are stretched out over the full LP length allow an artist to create a full atmosphere rather than just condensation on the windows. Unfortunately, the remix format really extracts and commodifies the sounds of the original albums rather than do anything wildly different or interesting to it. The mix might sound alright on the dancefloor, but so would the original effectively mixed into a good DJ set.