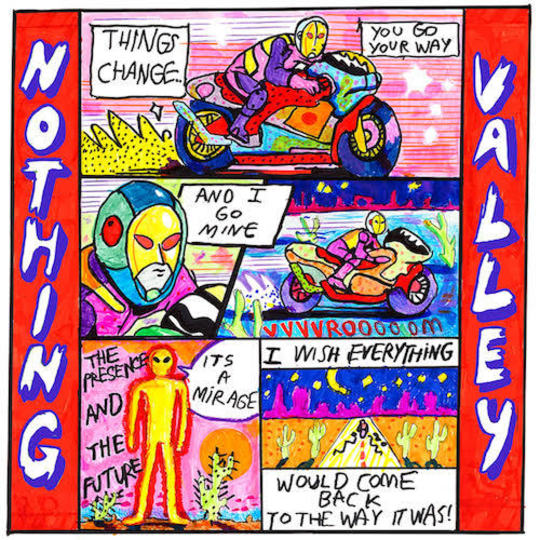 Noise-rock four-piece Melkbelly formed in Chicago's ever-fertile music scene just a few short years ago. But with just a handful of singles and an EP under their belts, a swift rumble of excitement grew around the band. Although they’ve been a noisy bunch since their inception, 2014’s Pennsylvania EP did allow Miranda Winters’ vocal and the melodies to shine brightly amongst all the shredding and thrashing. As their subsequent singles appeared they began to turn up the dissonance and destabilise the vocal centre for the harsher ‘Bathroom at the Beach’ and ‘Piss Wizard.’ Nothing Valley marks not only their debut long player but also the inaugural release for Sadie Dupuis’ (Speedy Ortiz) Wax Nine records. With that in mind, it might be reasonable to assume they might temper their more abrasive whims in the name of more mainstream recognition. Turns out not, thankfully.

This is a record that screeches out of the starting blocks firing on all engines. Balling feedback launches ‘Off the Lot’ and two minutes of thrilling elasticity. The breathless pace is warped by Winters’ elongated vowels one minute then the rapidity is ramped up in an instance as the band tighten to a frantic breaking point. It’s an exciting introduction, to say the least, but to sustain that level of histrionics throughout would be pushing it, and wisely the following track, and lead single, is a more malleable affair.

Casting a sharp eye on freeloaders ‘Kid Kreative’ backs up and lurches forward never losing sight of the target, as Winter’s mischievously taunts “call him kid creative / call him kid creative.” It’s oddly both hypnotic and electrifying, and its rhythms recall The Breeders' playfulness. Although Melkbelly share that band’s keen sense of melody and similarly rock in all the right places, they also work quite fervently against that inherent tunefulness. Often the vocal is almost overwhelmed by waves of reverb and quicksilver drumming, and this flip side to their music also aligns them with the clattering chaos of a band like Lightning Bolt.

It’s a battle Winters is more than capable of withstanding, as she can marry the sweet and the sour with the best of them. ‘Middle Of’ contains sweetly sung verses that clash against a barking chorus, and while ‘RUNXRN’ flirts with sludge-metal, she toys with a deadpan melody before dropping down to an intimidating level for the “deal or die / deal or not” refrain. The tension between voice and instrumentation evokes flashes of Th’ Faith Healers, and the blistering crackle of their track ‘Hippy Hole,’ as both Roxane Stephen and Winters manage the unenviable task of battling discordance. ‘Twin Lookin’ Motherfucker’ is such a success, and one of the albums best, that interweaves percussive pummelling against gravelly guitars and all the while Winters’ voice breaks the surface with a sweet, memorable hook.

Any recognition found in their music is offset by a strong sense of individuality. There’s a uniqueness to the players that has made all of their music thus far wonderfully idiosyncratic and distinctive. There’s a wealth of detail within the album from ‘R.O.R.O.B.’s drowsy vocal that breaks into an arching finale of barely-held-togetherness, to ‘Petrified’s snaking guitars. Equally, the rumbling instrumental interlude ‘R2PCM’ is a welcome interruption, as is ‘Cawthra’s power-out abrupt ending.

For all the feverish riffs, squealing feedback and hysterical drumming (James Wetzel being one of the most engaging drummers of recent memory) their music isn’t a culmination of unfettered disorder. This is a band that clearly knows what they’re doing, and they're doing it brilliantly. Nothing Valley is carefully orchestrated disarray, and it’s a hoot. Melkbelly have created a thrillingly unprocessed debut bursting with noisy imagination.