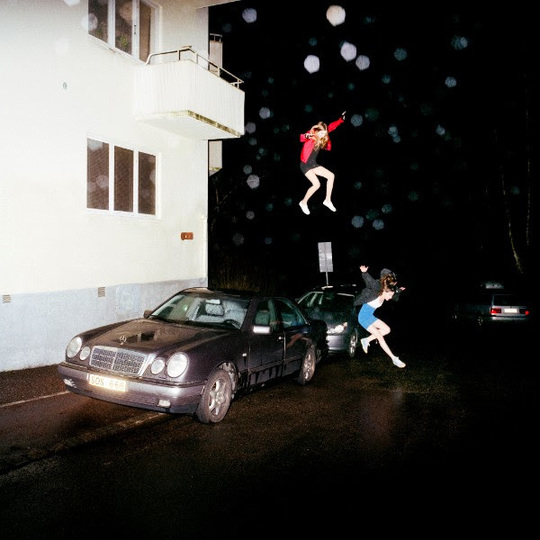 A lot can change.

Stars have shone bright and burned out.

Regimes have risen and fallen.

And from the trenches of a ravenous ‘everything now’ pop culture, fuelled by a news cycle with its pedal to the metal, seven years can start to feel like a lifetime – perhaps no more so than for hardcore Brand New fans waiting patiently for the band’s fifth record, the band’s cult mythos building all the while.

But now that it’s here - an album called Science Fiction that had started to become the stuff of it – Jesse Lacey’s here to set the record straight about one thing in particular: if time has taken its toll on his enraptured audience, try being the ones wrestling with it: “I thought I was a creator / I’m here just hanging around / Got my messiah impression / I think I got it nailed down.”

The result is a slow-burning, highly confessional album (the therapy session clips that litter the record are no accident), which contains the most tightly constructed batch of Brand New songs yet.

Some feel familiar, some emphatically new, because although a lot can change in seven years, some things never do.

In the change camp, it’s clear from the first listen that this is a more consistently muted and melodious affair.

There’s no room for the post-hardcore bounce of singles ‘Mene’ and ‘I Am A Nightmare’ or their ilk, because where Daisy traded in sneaking up behind you and then punching you between the eyes, Science Fiction deals in getting under your skin.

Case-in-point is opener ‘Lit Me Up’, which threatens to explode but never quite does, instead remaining dream-like and simmering throughout, all woozy bass-lines, conspiratorial harmonies and heady atmospherics.

Elsewhere, the acoustic guitar that has previously played a supporting role on Brand New records is elevated to the forefront. ‘Could Never Be Heaven’ soothes and sways even as it deals in “[breaking] through this contradictory mess”; closer ‘Batter Up’ has a desperately sad arpeggiating riff that eventually disperses into an extended instrumental coda, sealing the record with the ruminative sound of rain that’s underpinned its mood throughout.

‘In The Water’ meanwhile, could almost qualify as alt-country: slide guitar, Hammond organ and Lacey’s distinctive twang dialled-up to take the band’s previous flirtations with the sound to the next level. To put it lightly, it’s a long way from ‘Jude Law and a Semester Abroad’.

In that same breath though, Lacey’s ability to mercilessly skewer his subject matter remains defiantly in place, simply honed in delivery and now at its most mature and wide-ranging in subject matter.

‘Desert’ continues the alt-country vibe in sound, but twists it into parody through lyrics that attacks fake news-fuelled, bible-bashing conservatives:

“If I believe only half what I read / I got a reason to be dug in deep / It’s revelation saying / Don’t come running to me / When they’re coming for you”.

From a lyricist who has always been good at twisting the knife, this smart double down on venom is an extra-satisfying touch.

This expanded scope is sometimes direct - as when ‘137’ takes on the world’s end as the Doomsday Clock ticks closer to midnight, (“Let’s all go play Nagasaki / We can all get vaporised”) - and at others laden with poetic meaning – see the swaggering desert rock of ‘451’ (“Swallow the pitch that flows from the earth […] A million suns won’t fill you up / If you can’t see the wine flowing over your cup”).

These moments are significant, because for anyone that might previously have dismissed their music as whiny - or for that matter the generation that grew up with those first records and just want to hear ‘Seventy Times 7’ for the 490th time - they allow a band that’s long-shed the lingering shackles of a long-dead scene a chance to flex their muscles.

It’s a plan-of-action that Lacey lays out right at the heart of the record, in a manifesto that masquerades as the first verse of ‘Out of Mana’. Well, after so many years away, you get why he wouldn’t want his intentions misconstrued:

“First write down all of your fears […] Next you should dominate / All the quests everyone said were too hard / And last you go back to sleep.”

True to his word, the opening half of the record is mostly devoted to a dissection of depression, damnation and creative frustration, whilst the second tackles the world-at-large.

Whatever the approach though, the songs that shine brightest on Science Fiction are those that strike a balance between Brand New at their most musically and lyrically ambitious, with the raw immediacy that has been the band’s heartland both live and on the record for 17 years.

‘Waste’ marries acoustic-led rhythm and post-rock reverberations with an anthemic chorus, and then segues with one subtle strum into a truly beautiful bridge, the repetition of “you are not alone” cutting right to the core.

‘Can’t Get It Out’ meanwhile, is the most overtly Pixies the band have ever sounded, but the loud-quiet dynamic that Black Francis’ mob made their calling card is reshaped in Brand New’s own image to best effect on ‘Same Logic/Teeth’.

As he takes on mental breakdown through a visceral physical lens, Lacey builds his imagery through some of his sweetest singing on the record, before having it collide head-first with some of his most caustic, screaming lyrics that embody the battle at-hand: “You’re just an actor, but now they caught you, a shade of what you use to be”. Where before the band’s willingness to experiment manifested in outliers like ‘Be Gone’ or ‘Untitled’, songs which could be both intriguing and distracting in equal measure, here the desire to mess with structure and delivery is harnessed with real purpose.


It sounds like the kind of song the band has been building towards all this time: intellectually sharp, instinctually captivating. And with that, it becomes the benchmark to judge the rest of the album by.

Tightly-wound and well-thought through as Science Fiction is, with little-to-nothing in the way of wasted space, what Brand New lose at points here is pure feeling.

Tracks like ‘You Won’t Know’ or ‘Daisy’ sounded like genuine spine-chilling desolation on previous records, but it’s hard to pick out a track on their latest that quite captures the same raw emotion.

The haunting, romantic outro of ‘Out of Mana’ comes close, but it’s left as a fragile sketch rather than fully resolved and ‘No Control’ does the same job at the other end of the spectrum, an intense, hammering punk riff building to nothing when after seven years and ten tracks you could really use some of that sweet, sweet catharsis you’ve been hearing so much about.

They even have the audacity to end penultimate track ‘451’ with the word "wait”. Cheeky bastards.

And yet, in the grand scheme of things, it seems a petty complaint.

This is a band that have always put what they want to do top of their priorities – infamously re-writing an entire record in response to demos being leaked – so with plenty of other songs to scratch that particular itch in their back catalogue, pulling a record together that values thinking over feeling and challenges its listener to do the same is no hardship.

The fact is that seven years down the line, Brand New have finally pulled the thorn from their side. And the thorn is compelling, cutting and contemplative in equal measure, riddled with Easter Eggs to satisfy older fans and written with song-writing prowess that’ll appeal to the new.

So if the band that wanted to stay eighteen forever decides to do so next year, so be it. This fresh part of their legacy is just as built to last.