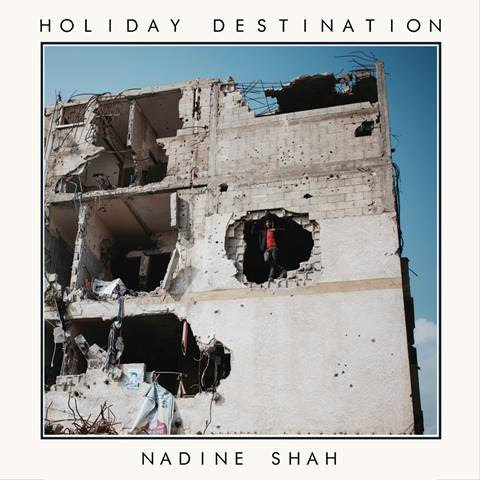 For most of us, 2016 was a tumultuous and ugly year – one steeped in political chaos and an air of uncertainty. For Nadone Shah, these headlines had been a big part of her life for years, and Holiday Destination – her brilliant and compelling third album out on 1965 Records – sees her stepping out of the shadow of the complicated relationships she examined on her second album Fast Food and taking account of the world at large. On Out the Way - a terrific first single that is as biting and scathing in equal measure as any of her output – Shah grapples with the fact that as a second-generation immigrant, her identity is constantly brought into question, the song appropriately ricocheting with burning intensity, bubbling over the bed of Pete Waterman's taut, jagged saxophone as she contemplates the rise of global nationalism. "So on this one trip to the States," Shah recalls, "I'm taken to the other side of the airport in this room where everyone in the room has brown skin - and they're all looking at me like 'what the fuck are you doing here?!’ I just made this joke, I just said - 'oh, I'm Pakistani.' And then everyone started to laugh. But it's just like - that's totally about a rise in nationalism that I'm seeing. It's completely terrifying. Even on Twitter I've had people telling me 'oh, go back to where you've come from' - and I'm like what? South Shields? It’s a proper identity crisis for me. I'm a second-generation immigrant - I was born in England, I'm very English - proper fucking English, mate!" she jokes, before adding "but I'm also culturally Muslim." Elsewhere Shah pulls no punches, exploring equally pertinent, difficult topics with similar intelligence and personality; from global issues such as the Calais refugee crisis and the Syrian civil war, to the more personal problems of inner turmoil surrounding the pressure of social conforming, the state of our mental health and simply encouraging others to have empathy. However, despite its themes, Holiday Destination is anything but a difficult listen. From the off it immediately becomes apparent that Shah and collaborator, co-writer and producer Ben Hillier’s knack for sharp hooks and rhythms have only progressed further. For Shah, the first ideas for Holiday Destination came back in 2014, "I saw this really shocking news piece. It was about migrants and refugees turning up on the shores of Kos in Greece by the thousands. There were some holidaymakers being interviewed and they were talking about how ‘they’re really ruining our holiday’. The fact that they had no shame in saying that whilst being interviewed, on national television... it really shocked me. This is what I am seeing across the globe: people unashamedly saying these awful things. It's like, wow - people really don't care and they'll happily talk about how they don’t care. That’s why it's called Holiday Destination.”
description from www.roughtrade.com