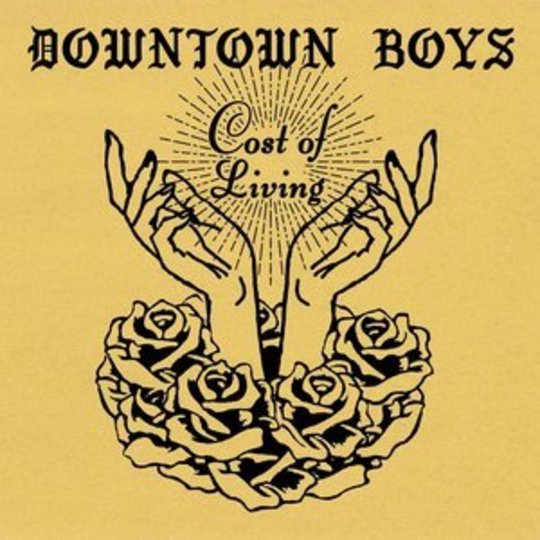 It’s interesting that in a year that seen its fair share of stuff going tits up worldwide has also produced a number of great punk albums. Already Priests have shared the magnificent wiry funk of Nothing Feels Natural, and Bristol band Idles proved you can be political and funny on the wonderfully caustic Brutalism. Now we have the enticing prospect of the latest Downtown Boys record. Communism, from 2015, asserted the Rhode Islanders as assured punk politicos with fire in their bellies and the musical nouse to match the message. And they’ve lost neither their energy or purpose on Cost of Living.

The band set out their stall in the first track 'A Wall'. Whilst it’s easy enough to figure out whose wall they’re referring to, it’s endlessly entertaining to hear them rip it to shreds over four-or-so minutes. Vocalist Victoria Ruiz opens the record by unequivocally hollering, “How much is enough and who makes that call?” Idealistic foundations duly rocked they and push forward with the assault by belittling the very concept, “A wall is a wall, a wall is just a wall and nothing more at all.” Having dissolved the decisive structure with ease the sax leads into a rapturous break and the call-and-response, “Do I need to say more? / fuck it fuck it fuck it fuck yeah!” It’s a protest, but it’s also an absolute blast.

Cost of Living begins at a frantic pace and pretty much runs with it for the duration. It’s a whirling dervish of a record that finds vocalist Victoria Ruiz channelling her best inner Poly Styrene on the desperately pitched 'I'm Enough (I Want More),' whilst a high ringing guitar line shines through, ramping up the drama. 'Promissory Note's babbling bass line is the backbone of this rager that includes the delicious dismissal: “What’s the matter, you don’t like what you see? I can't believe you’re even talking to me.” Equally, 'Because of You' maintains the hectic gait, 'Violent Complicity' has peaks that hit like waves, and 'Tonta’s foreboding bass and drum rolls usher in crazed sax for one of the most abrasive tracks on the record.

It’s an album that relies on all the band members to contribute their character. Ruiz’ voice has a powerful quality that she can flip from a ferocious wail to a delightful sneer on a dime. But her vocal is ably matched by Joey La Neve DeFrancesco’s vivid guitar playing and Mary Regalado’s ripped bass lines. Eighties-style keys and sax also add texture to what could have become musically one-dimensional. Their collective relentless energy combined with their individual talents saves their sound from feeling repetitive.

Perhaps more than anything it’s a relief to hear a band so passionately pissed off. It will hopefully ram a nail in the coffin of banal pop-punk of acts that sprouted in the aftermath of Blink-182 et al. It probably won’t of course. But hey ho, at least Downtown Boys are driven to make a fine socially engaged racket in riposte.