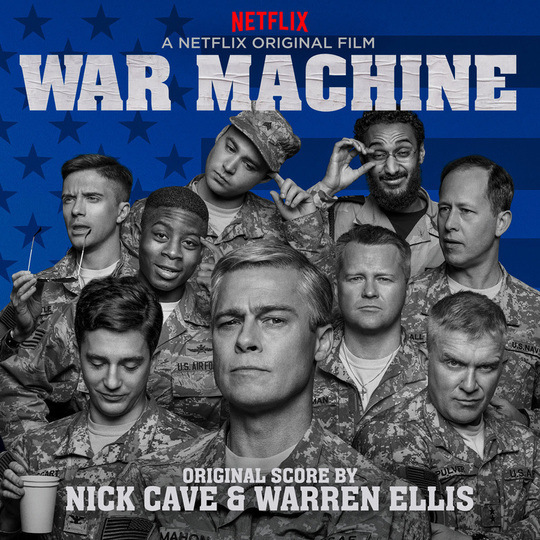 'We’re gonna liberate the shit outta you' is the tagline for David Michôd’s satirical war film War Machine. It stars Brad Pitt, Tilda Swinton, Ben Kingsley, and Anthony Michael Hall and is about how a general finds ending a war much harder than just ceasing the fighting. The star of the film isn’t its principle cast, nor its ability to follow in Slaughterhouse V, MASH and Catch-22's footsteps by showing the absurdity of war. No, it’s the score. This is handled by Nick Cave and fellow Bad Seed member Warren Ellis – their twelfth score and arguably their best.

'It is always helpful to be pushed into different worlds that are unique and unknown,' Cave and Ellis recently said. 'War Machine demanded a wholly different type of score than we had previously done. Together we made a score that was both light and dark, propulsive and meditative at the same time. We developed a kind of "spiritual electronics" that captured both the melancholy and the terrible absurdity of the Afghan war. It was a great pleasure to work with David Michôd, who is not only an extraordinary filmmaker but a musician too. Our favourite score!”

War Machine opens with ‘Ah America’. This is a slow burning, ethereal, track that gently suggests that this is isn’t going to be a bombastic as The Assassination of Jesse James by the Coward Robert Ford or Lawless… and shows that Cave and Ellis have more to offer than searing soundscapes.

The strand out track on the album is ‘Humble Man’. Throughout its three-and-a-half minutes it feels like a lost Beatles track from their time in India. Delicious harmonies swell while throbbing ‘spiritual electronics’ keep the track moving along. ‘Marjah’ is another tour de force. It is chock full of wonky melodies and woozy synths. As it undulates, you are thrown into a feeling of unease and unrest. ‘The Hand of Helping’ continues what ‘Humble Man’ started with a more ethereal feel. This really works for the song as it gives it a lurid and dream like quality. The album ends with the title track, ‘War Machine’. Its inclusion at the end feels right. If the album had opened with this, it would have been strong, but the conclusion might have felt like a let-down. ‘War Machine’ takes the themes and ideas for the previous 18 tracks, and manages to combine them to create something that not only is cohesive but sums up the whole score, and film.

War Machine doesn’t sound like a typical Cave and Ellis score. It feels like they’ve fallen back in love with not only music, but scoring films. Every track feels epic, but understated at the same time. When listening to it at work, on the bus, or at home the music never dominates you 100%, as a John Williams or Alexandre Desplat score can do, instead it sits just behind the scene, or your life, and accompanies it perfectly. And this is what a classic score should be able to do. Its job is to enhance the story, add an emotional impact to the scene, but never steal focus from it. This is done through delicate motifs and intricate rhythms being peppered throughout the score. A deep melancholy permeates it too, this plays is a perfect counter to the subject matter, a satirical film about the Afghanistan War. The scores to the films Catch 22 and Slaughterhouse V worked well due to the starkness of the music, but War Machine adds light and dark flourishes. This is the work of musicians who not only understand how to craft incredible pieces of music, but totally understand the genre they are working with. Whatever happens with Nick Cave and the Bad Seeds going forward, let’s hope that Cave and Ellis continue to create exquisite scores like this.