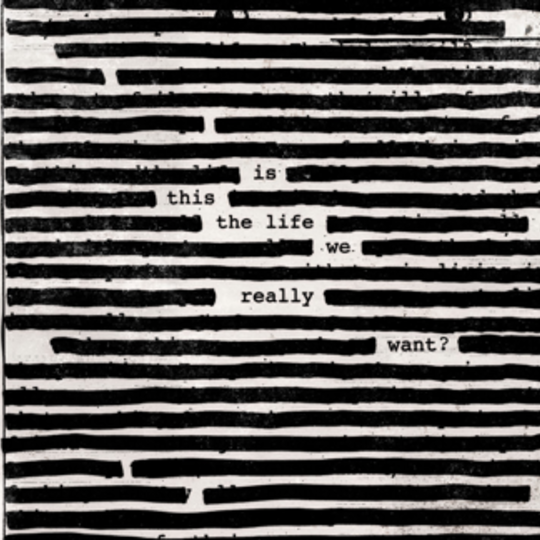 You have to hand it to Roger Waters: never one to shirk from a challenge, and never one to mince his words, he’s picked the exact moment Pink Floyd enter the V&A for the Their Mortal Remains exhibition to put out his first studio solo album in almost 25 years. Although to be fair, he’s at least on speaking terms with his former band mates these days, and thankfully that means I can leave the rambling essay/ history lesson for another day. Not that I’d be able to say anything you don’t already know, as the lives and careers of Waters and the Floyd have been dissected about a million times over the past 40-odd years: if you do want a bit of background to both, I’d recommend Nick Mason’s memoir Inside Out more than anything.

Anyway, I’m sure Floyd fans and Waters die hards alike will be as happy as flying pigs in shit at the amount of activity in each respective camp, and to quote the man himself on Is This The Future We Really Want's brilliantly weird little intro ‘When We Were Young’: “who gives a fuck, it’s never really over”.

After his last concept album, 1992 Amused To Deathhttp://dis11.herokuapp.com/releases/18933/reviews/4149250, which commented on television’s encroaching influence in daily life, especially around the time of the first gulf war, it’s heartening to hear him still with a belly full of fire and a head buzzing full of ideas on ITTLWRW - the voice might falter and wobble a bit more these days, but that anger and appetite are still very much there. Touching on life in 2017, I can imagine Waters out of his mind witnessing what’s happening around the world these days: “picture a shithouse with no fucking dreams, picture a leader with no fucking brains_” his grizzled, off kilter American accent snarls on ‘Picture That’.

Produced by Nigel Godrich, the trademark Waters growl gets some absolutely lush instrumentation to wander around in: it’s not as obtuse or as grim as A Moon Shaped Pool, for instance, but many of the same ingredients are there: synths buzz and glide, string sections wax and wane, and guitars strum and scream. Perhaps a nod to The Wall, there’s also a lot of sonic collaging, cutting up Waters’ speech, telephone conversations, train announcements, and even a shipping forecast in there for good measure. It sets the mood perfectly, very subtly garnished around the album to give it that sense of impending doom, but never fully submitting to it.

It’d be interesting to see how much Godrich has built up on these songs, as a lot feel like sun-soaked acoustic Americana, but elevated into something a lot grander with the humongous string sections and subtle atmospherics. ’Broken Bones’ is a prime example - all country strums, and baritone growl lifted with soaring strings and dashes of slide guitar. The partnership works fantastically well, and those plucked electric guitars that Radiohead do so well bleed into the record, particularly on the brilliantly creepy ’The Life We Really Want’ - it’s almost as if Yorke, Greenwood and co. are the backing band by proxy, which is no bad thing.

The strings actually remind me of Sea Change by Beck - another record that Godrich had a hand in. His masterful arrangements and dynamics really made that album something special, and it’s no different here: there’s something in the way he gets a piano, a drum kit, and a string section to play together that sounds like absolute fucking honey, and by the time we get to ‘A Bird In A Gale’, he’s just showing off. The bastard.

It’s strange to hear lyrics so literal, and so un-cloaked in any kind of intellectual smoke-and-mirrors: it’s what you get with Waters - a raw, jagged-to-the-bone stream of ideas, spat with such ferocity that you forget he’s now in his seventies. Sometimes he strays into cliche, but as it’s delivered with such conviction, you can forgive him such transgressions.

It’s also a big album: a long, sprawling epic that stretches out for it’s slightly-padded running time, but one so full of ideas and intricacies that it’s an easy album to get sucked into - a sonic world you can get lost in, permeated with that familiar swirling synth sound that slides all over one of Waters’ best Floyd records - Animals. It also feels very intimate - Waters's voice feels like he’s right in front of you the entire time: he’s there, not flinching, and he’ll sit with you for about an hour and let you know where we’re all going wrong. And to that, you have to say fair enough.