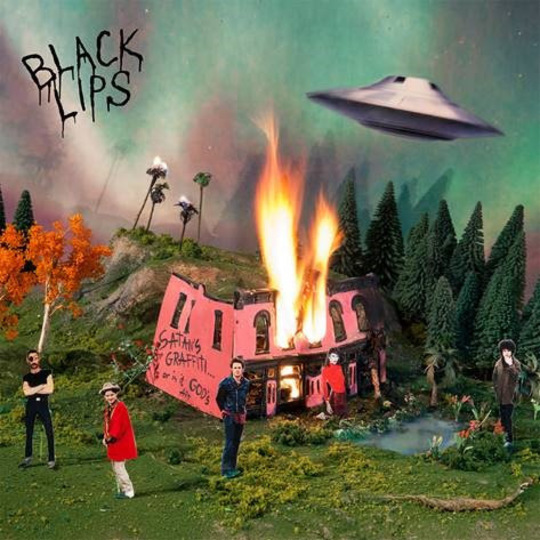 Black Lips have spent 15 years not fitting into boxes. The fact their self-bestowed ‘flower-punk’ tag has stayed with them all this time is a testament to that, and looking back over the band’s career brings more surprises than should be expected from a band that many would simply lug into a garage-punk box along with Ty Segall, Jay Retard and Thee Oh Sees.

Black Lips have dropped the simple garage-punk of songs like ‘Bad Kids’ from their earlier albums, instead exploring deeper into their psychedelic side for the past few years. This latest album always promised to be a deeper extension of that muddier side of the band since it was announced that Sean Lennon would be helming the sessions. What wasn’t clear was the the album was going to be the band’s opus; a sprawling 19 track colossus, complete with intro, outro and interludes. The band also had a lineup change, reconnecting with past guitarist Jack Hines, whilst adding saxophone player Zumi Rosow and drummer Oakley Munson. Throw in a few appearances from Fat White Family’s Saul Adamczewski and Yoko Ono, and Satan’s Art or God’s Graffiti almost feels like it could be the band’s attempt to churn out one last mission statement, encompassing everything they’ve done.

And it does seem to take hints from their back catalogue. There’s the demented horns and heavy crunching guitars of Ronson-era Black Lips on tracks like ‘Squatting In Heaven’, there’s some unhinged Sixties doo-wop, like from Good Bad Not Evil on ‘Wayne’ and the dark, psychotic garage of ‘Come Ride With Me’ on 200 Million Thousand.

The best tracks on the album work when they take the classic formula and add some new elements. ‘Wayne’ compliments its simple doo-wop ballad formula with some vocoded vocals, which add warm layers of vocal harmonies, whilst ‘Crystal Night’ is a messy, drunken 5Fifties prom homage that has pitched-up, near angelic backing vocals. These interesting production techniques make a much better stab at modernity than the band’s previous attempt on ‘Do the Vibrate’ from Underneath the Rainbow.

Satan’s Graffiti Or God’s Art?’s greatest weakness is its length. Whilst the band’s attempt to create something more conceptual than usual is admirable, it's hard to say for sure they have pulled it off. Opening on the bombastic gut-punches of ‘Occidental Front’ and ‘Can’t Hold On’ sets the album off at a rattling pace, but after ‘Squatting in Heaven’ it starts to lose that momentum. Whilst the interludes are atmospheric, they mostly sound like half-songs. ‘Elektrik Spiderwebz’, for example, is a lush, eerie jam, but the wailed vocals over the top add nothing to it; hearing a completed vocal take would have been much more fulfilling. With songs rarely reaching over four minutes, it's hard to get truly bored, but there’s no denying that many central tracks on the album find the band reverting to type.

Waiting till the end of the 19-track monster pays off however. ‘Lucid Nightmare’ is free of the cluttered sonics that plague some of the tracks, and the deadpan chorus sounds suspiciously Fat Whites-esque (Adamczewski actually guests on a different song) . There’s also the small matter of the band’s cover of ‘It Won’t Be Long’ where they turn the classic Beatles love song, into something far creepier. The guitars sound dark and menacing, whilst the slight melody change in the chorus transforms the whole song’s mood in an instant. ‘Losers Lament’ is the last full track on the album, and possibly the best. A rare moment of calm from Black Lips causes the emotion of the vocals to seep through, whilst the chiming acoustic guitars turn it into a wonderfully lo-fi ballad. Creating a 19-track album out of Black Lips’ brand of messy psychedelic punk was always going to be a huge ask. And they have nearly pulled it off.