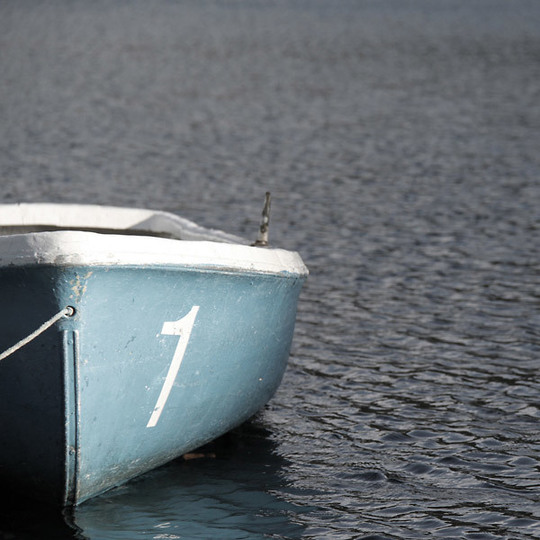 There’s something glorious about the imagery provoked by Wakes on Cerulean, the first collaboration between GRM-based electronic composer Kassel Jaeger (real name François Bonnet) and serial avant-garde collaborator Jim O’Rourke. The album’s front cover depicts an empty cerulean boat on the water. A perfectly white rope leading out of shot suggests that the vessel is moored, but there is no land in sight.

This simple photograph, combined with the record’s title, proves rather evocative when paired with Jaeger and O’Rourke’s electronic explorations. This two-sided LP is the sound of stirring afloat, of opening one’s eyes to see the perfect blue sky and – most importantly – of being somewhere apart from the ground. I don’t mean this in a transcendental hippy sense. Wakes on Cerulean isn’t some sort of out-of-body experience. It is, however, a comprehensive sound world in and of itself. It’s so comprehensive in fact that its 35 minutes could just as easily be an hour (or four) or 15 minutes. Wakes on Cerulean is destined to spend plenty of time on repeat for those who fall for its charms.

Listening to really good “experimental” electronic music is all about acknowledging the manifest possibilities not of music per se but of the various textures one absorbs over the duration of a record. The first side of Wakes on Cerulean emphasises this from the off. The early stages are more komische than one might expect from this pairing, although not in a nostalgic sense. In fact, this is a record that might as well be dateless, given that it’s so uninhibited by contemporary or past trends and styles. The second side demonstrates this, managing to offer a distinct approach without contradicting the first. Here the tones are deeper, less clearly defined, but equally beautiful.

The various sounds on offer here are, for the most part, unidentifiable – as should be the case, but at the same time their blissful serenity might be traced back to the continually un-impinged creative enthusiasm of their makers. This is a meeting of minds between two highly prolific artists, whose capacity for consistently producing high standard work can be slightly daunting as well as impressive. There’s always a temptation, with artists as ready to forge new creative partnerships as Jaeger and O’Rourke, to see each release as another drop in the ocean as opposed to being a more meaningful artistic statement. That’s fair enough but when collaboration comes off, as it certainly does here, it’s acts as a sublime reminder of the communal elements of music. There is sometimes a perception of ambient music, in particular, as solitary music, but records like this are reminders that meetings of minds can produce quite stunning results that fail to sit neatly within the midst of a lengthy discography or – even – within a record collection.

Wakes on Cerulean may mean many different things to many different listeners. Not all will be as captivated by the colour and implied serenity of its cover image and title as me. I imagine, however, that I won’t be the only one who finds it a hugely fulfilling record to dive into again and again. This is a true highlight of both artists’ extensive catalogues of high quality work.