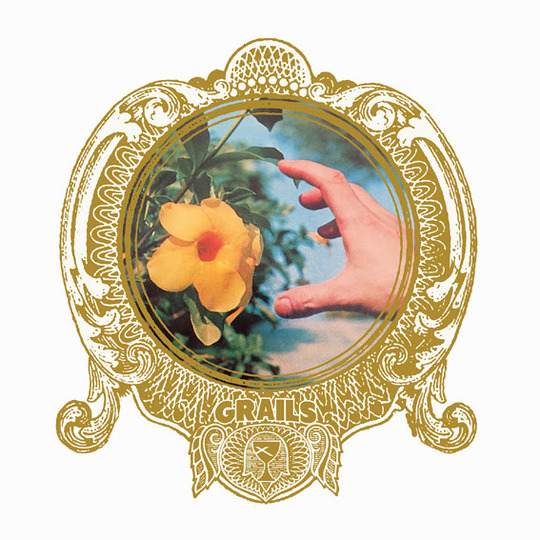 Grails have existed in the post-rock/hardcore liminal zone for some time. Hugely respected within their scene but never really rising to the top of the genre and into the wider public conscious, being better known for guitarist Emil Amos’ stoner metal band, Om. Currently, on Temporary Residence (Explosions in the Sky, Mono) a label known for its extensive post-rock back catalogue, they now follow up 2011’s Deep Politics. On that album, the Portland, Oregon band finally found a distinct voice to their instrumental music, and here, on new record Chalice Hymnal they’ve looked to grow on that.

The opening title track certainly gets things off to a strong start, utilising deep bass and pounding drums to create a thrillingly cinematic piece of music. Grails have a stronger sense of electronics too, such as the tension filled ‘Pelham’ while ‘New Prague’ takes on a riff brimming psychedelic funk track. There is an intensity that looms over the record even in its quieter moments, an air that anything could happen, and when the band really let themselves go down that path, it is a rewarding listen.

These varying styles are impressive, but as the album progresses the band still often rely on the clearly influential Godspeed You! Black Emperor as their leaders. This isn’t to say Grails can’t find original things to do with that well-established sound, it’s just that some of the album’s peaks, like ‘Deeper Politics’ are rather familiar. Similarly, the way ‘Deep Snow II’ builds and falls is very reminiscent of Godspeed, even if it is a very well crafted, interloper of a song.

To their credit, Grails look elsewhere, in less expected annals for their production. ‘Tough Guy’ for example has all the pomp of Leftfield or Massive Attack in their primes. It’s just not often enough does this record really grab the listeners attention. The band produced the record themselves and while they have done a mostly excellent job, there is an overarching problem that it and the music aren’t ambient or textured enough, rather choosing something in between. They have stated that they were influenced by hip hop and electronica when approaching the production which may well work for the record’s deeper cuts but can sometimes undercut the more delicate songs.

Ultimately, there are plenty nice touches to Chalice Hymnal, but it isn’t the most memorable record from a well-worn genre. Epic closer ‘After the Funeral’ keeps interest at least, turning a lounge jazz track into something threatening. Given the layers and room to breathe the ten-minute track gets, inflected with strings and keys, one ends the album wishing they had done more of this style in the first place. Chalice Hymnal drifts a lot and while every song is distinguished, too often shorter tracks don’t feel as fully developed as their longer brethren. Given the five years, the band have been working on their latest, it is surprising to find a record that feels more performed than written, with varying degrees of success.