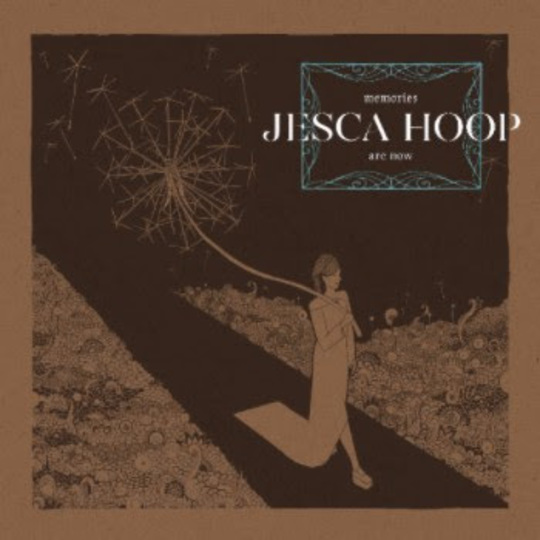 I’m driving. I’m always driving. And so some sights you take for granted: forests that border the interstates, shuttered food stands, railroad tracks.

Now I’m sitting stationary, trying to write this review of Jesca Hoop in the way that most people write reviews – listen enough times, juxtapose the sound with other artists that sound similar, compare and contrast. But Hoop’s a tricky spider to catch, poised as she is on a peculiar web of song that stretches back nearly a decade. From her lucky break via Tom Waits, to her poignant duet album with Iron & Wine’s Sam Beam, she’s always known how to enchant. Yet Memories Are Now needs none of the gothic quirks of Hunting My Dress, nor the pop gloss of The House That Jack Built – and, listeners, what always chills my blood and ties my tongue is Hoop herself, no longer a spider but a monarch butterfly, louder and brighter and stronger than she’s even dared to sing before.

I’m driving. I’m always driving when I listen to Hoop. Cracked, ancient asphalt; a blasted clearing of piled trees and upturned earth; the blink-or-you’ll-miss-it town of Bishop; an abandoned cross-section in the heart of Little Five Points. The scenery blends with the rustic production – steel guitars that glide with muted grace, understated but plucky melodies that evoke some of Paul Simon’s trickiest tunes, the palpable grit in Hoop’s congenial drawl.

But out there, I also see the conundrum that Memories Are Now keenly explores: does technology dictate our thoughts? Have we disconnected from nature and each other? Have we forgotten life before the Internet? The conversation could be a dire one, but Hoop embraces the topic with verve and joy, like in the fireside ramble of 'Simon Says' or the traipsing lilt of 'Animal Kingdom Chaotic'. There are folk hypnotised by their TV sets, foiled by computer prompts, talking with borrowed words – and they are only people, not condoned or judged but merely observed, and danced around by Hoop’s plucky wit.

See, naysayers of this modern world corner themselves into irrelevance because they lack compassion. That’s the real aura that draws me in again and again – the ghost of romance, the trace of human contact. Now, I’ll admit: I have been ripped open lately, infected by vague but restless desire, so perhaps I seek something akin to love more than most – but even if I didn’t, Hoop would persuade me to crave it. 'The Lost Sky' is another world in itself, a dusk-lit snowglobe that I’ve peered into often with burning envy, even as the protagonist pines for her wayward lover. (What’s that old phrase – “better to have loved and lost than to have never loved at all”?) And my, how 'Cut Connection' weds the personal and the global – ”be a part of all things,” she and many voices chant toward the end, imploring not just a lover but everyone to reach out to each other.

But Hoop’s greatest triumph here could be her dialogues on religion. Christ. I’m no authority on songs about losing faith, but Hoop has to be the most earnest and aching cynic I’ve ever heard. On 'The Coming' she weighs her parents’ belief, centuries of conflict, and scathing doubts – all with the known risk of unraveling her own self. Time crawls to a halt; our pulse beats with hers; we see the world and its endearing flaws. 'Songs of Old'” touches on this inner struggle with one of the gentlest songs on the record, a palimpsest on which quiet critiques of Christianity are written over refrains from the past (“the gold is marked by red…empires are made this way”).

I’m driving. I’m always driving. But I’m rarely caught under a spell such as this. And I fear, if I try to explain more (and my words already pale before hers!), the spark that warmed me through my solidary rides will lose its warmth. Moments slip too quickly in my hands – but past, present, and future rest patiently before Hoop, and she’s weaved them all into her most endearing album yet.