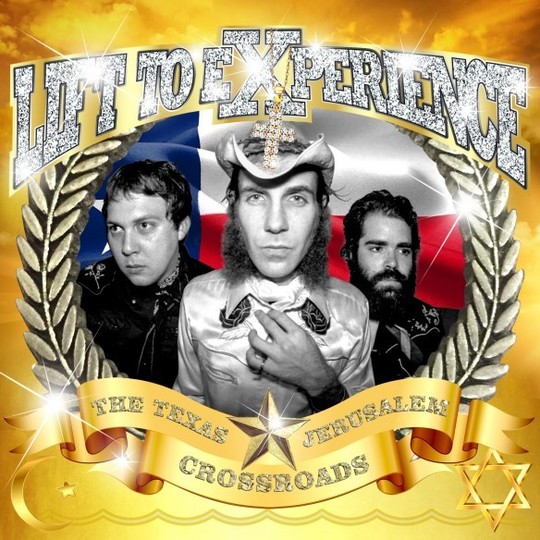 "This is the story of three Texas boys busy mindin' their own business when the Angel of the Lord appeared unto them saying..."

And so begins one of the most epic musical journeys every committed to tape (and every review of it ever). If there was ever a case of an album being 'ahead of its time' this probably is it. Akin to Slint's 'Spiderland' in many ways, Lift to Experience's The Texas-Jerusalem Crossroads came seemingly out of nowheresville middle-America (Denton, Texas in this case) and only made a small ripple at the time, the summer of 2001. The band disappeared shortly after, satisfied with their contribution (even if critically and commercially it wasn't an overwhelming success at the time) but also citing an interest in their solo careers - most notably, lead guitarist/vocalist Josh T. Pearson's - and a changed world post-9/11. To date, last year's appearance at Guy Garvey's Meltdown Festival at the Royal Festival Hall remains their only live performance since.

It's fascinating looking back on critics' initial response to The Texas-Jerusalem Crossroads years later. In general, no one could deny the band's ambition in taking on such a 'big concept' 90-minute record about the biblical end of the world taking place in Texas (rather than Jerusalem's actual location in Israel), but there's a resistance to those same religious allegories and questions Pearson mulls over this 90-minute epic, coupled with the band's own meta-self-referential plot within the tale. For the uninitiated, The Texas-Jerusalem Crossroads begins with "the Angel of the Lord" appearing in front of the band one dark Texan night, prophesising the end of the world is coming and they must "lead the children of Israel to the Promise Land" which turns out to be in Texas. Across the next 90 minutes, Pearson wrestles with his specifically American-Christian struggles with forming a successful band with "a smash hit" as he negotiates with God himself in 'Waiting'.

On that summary, it's perhaps understandable that initial audiences weren't really sure how seriously to take Lift to Experience's debut (and only) full-length record. Were they actually speaking from a privileged religious point of view - the album certainly isn't an outright criticism of Christianity - are they in fact as arrogant as they suggest in 'These Are the Days'? - "So all you haircut bands, doing headstands/thinking you'll turn the world upside down/Put your guitars up over your shoulders/A new sort of experience is taking over /'cos we're simply the best band in the whole damn land/and Texas Is The Reason." - is this meta-fictional narrative just simply pompous and pretentious?

Similarly, by the summer of 2001, musically, audiences would now be fairly used to the epic "post-rock" record. The beginning of this millennium was a pretty incredible time for music considering what was coming just around the corner. Bands who at the end of the previous century had posited themselves as outsiders prophesying, if not maybe the end of the world, certainly a catastrophic change to it, were already releasing big 'statement' albums - Godspeed You! Black Emperor's Lift Yr. Skinny Fists..., Explosions in the Sky's Those Who Tell the Truth... - while other already gloomy bands changed their established style post Y2K to point to the huge imminent technological changes, both in their music and what it means to us, on its way - Radiohead's Kid A, Fugazi's The Argument, Unwound's Leaves Turn Inside You; however all these bands removed themselves from their art's focus. While there is no way any of these artists knew exactly what was coming - which fellow Texans Explosions in the Sky found out the particularly hard way - there seemed a general trend in 2000 and 2001 that something was coming.

There are many comparisons to be made between then and now. At the beginning of the millennium, George W. Bush has been sworn in on a wave of right-wing populism after eight years of controversial liberalism, scaring everyone out of their late Nineties stupor into a decade defined by war which would carry on into the next presidency. I don't need to patronise you by asking if this sounds familiar, so instead, it is more useful to point how this re-issue seems particularly pertinent in 2017. If in 2001 The Texas-Jerusalem Crossroads risked being sanctimonious, 2017's collective doom-mongering makes this album suddenly very relevant indeed - just when we thought white, American privilege couldn't surprise us any further they go ahead and elect a fascist.

It also helps that we as an audience are now much more smart to Pearson's intentions. Given his tremendous solo career in the subsequent time, we are familiar with his wry sense of humour and very real religious and spiritual considerations. Equally, we now live in a very changed world both socially (well, kind of) and musically 15 years on where meta-fictional concept double-albums - such as Fucked Up's David Comes to Life - is now not such an alien concept in indie music.

Musically, The Texas-Jerusalem Crossroads speaks for itself. It is a tour-de-force in musicianship and songwriting, especially impressive for a three-piece. For 90 minutes, the world really does sound like its ending as this trio blast through sonic explosions on their respective instruments, move to delicate, reverb-soaked moments of sorrow and back again over the course of this double album. Another big reason for the record's underrating at the time is the very valid argument of its sketchy production - hence the real reason for the re-mastering. While the original is still impressive, there often lacks a clarity between each member's input and layering from the Cocteau Twins' original mix, which thankfully has now been fixed by Matt Pence (Jens Lekman, Yuck, True Widow) so that the guitars shimmer, the bass rumbles and the drums explode.

With that in mind, along with America's current climate, there is no reason why The Texas-Jerusalem Crossroads shouldn't finally find its place in indie-rock music's canon. It is a stunning singular work, hugely visual and symbolic like a great film or novel that highlighting individual tracks is kinda empty when it so clearly should be enjoyed as a whole. Let's just hope the Angel of the Lord's prophecies doesn't come true.