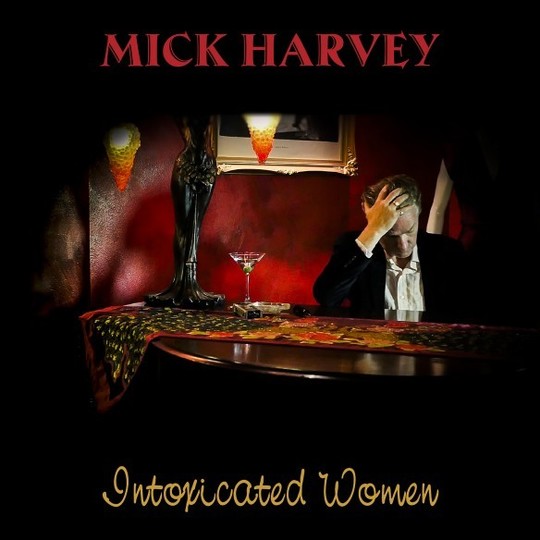 In the 36 years since Serge Gainsbourg died, his reputation has changed. He’s gone from drunk has-been and chat show letch to musical pioneer and now is considered, by some, as possibly the last great French musical icon, Dark Punk notwithstanding. But the way he should be remembered is of a musician and songwriter of prodigious talent, who was always trying to push not only his musical landscape, but himself too. Mick Harvey’s obsession with Gainsbourg started in the Nineties when he released two covers albums called Intoxicated Man and Pink Elephants. Last year he returned to Gainsbourg's back catalogue for Delirium Tremens. The album showed that people still care, clamour and relate to Gainsbourg’s work, even if his name isn’t as prevalent as it once was. And now, less than a year after Delirium Tremens, he has released another album of covers called Intoxicated Women.

Of the recording sessions Harvey has said 'After the initial recordings for Delirium Tremens JP Shilo and I continued investigating the duets and female songs, many of which were unknown to me. So it became a voyage of discovery into quite a lot of material I hadn’t heard before.' And this is the beauty of Gainsbourg’s monumental back catalogue. Once you get past the best ofs and start to digest his work album by album there is a plethora exquisite music that doesn’t get spoken about. And in a way this is what Harvey’s albums are about. Uncovering the music that gets over looked for one reason or another.

Intoxicated Women focuses on the many duets Gainsbourg recorded with female vocalists, Jane Birkin and Bridget Bardot most famously, and those duets recorded in the Sixties. Harvey is joined by Channthy Kak (Cambodian Space Project), Australian singers Xanthe Waite (Terry, Primo), Sophia Brous, Lyndelle-Jayne Spruyt and Jess Ribeiro and the German chanteuse Andrea Schroeder Harvey’s son, Solomon. Song wise, the usual suspects are here ‘Je T’Aime… Moi Non Plus’ (the second time Harvey has covered it), ‘Cargo Cult’, ‘Sensuelle et Sans Suite’ are all represented. There are downsides, however. The German translation of ‘Je T’Aime… Moi Non Plus’ is a nice touch, but it feels like a step backwards, as it was already covered on Pink Elephants, and sadly covered better. It would have been more interesting to have a lesser known song from either Jane Birkin/Serge Gainsbourg, Bonnie and Clyde or <L’Homme a Tete de Chou.

The real thrill of the album comes from the lost songs like ‘La Noyée’ and ‘Dents de Lait, Dents de Loup’, as they are getting a public airing for virtually the first time. These are the stand out tracks of the album. This is partly because they were considered lost and hearing them is a real thrill for Gainsbourg fans. But they’re also the standout tracks because they feel like Harvey originals. He’s taken care and consideration to make them stand out.

Despite the enjoyment of hearing these songs with the luscious instrumentation Harvey has given them, there is a feeling that the series has started to run its course. When Intoxicated Man and Pink Elephants were released over 20 years ago they felt like a breath of fresh air. The fact that someone was evening mentioning Gainsbourg’s name felt exciting and, dare I say, cool. Delirium Tremens was a welcome return, but it didn’t go anywhere near equalling, or eclipsing, those original records. The song selections were interesting and the ‘Anna: Suite’ was a nice touch, but it felt like he’d already covered the songs he wanted to in the Nineties. And much of Intoxicated Woman feels the same. This is a perfect introduction to new Gainsbourg fans and long standing followers will find plenty to get behind, it just feels that something might have been lost in translation somewhere along the lines.