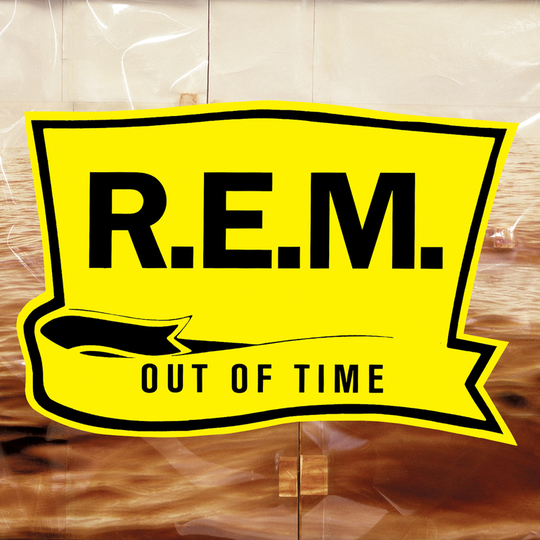 After an Eighties spent as the most critically revered band on the planet, R.E.M. finally became global superstars with 1991's Out of Time and its extraordinary lead single 'Losing My Religion'.

It wouldn't last: the following year's Automatic for the People would push them further into the critical and commercial stratosphere . But their huge new audience - and much of their old one - would be flummoxed by the uncompromising, experimental follow-up records Monster, New Adventures in Hi-Fi and Up, and while the band remained popular, the duration of their actual superstardom was probably only really four or so years, from the release of 'Losing My Religion' to the end of the troubled Monster tour.

None of this could be guessed at in March 1991, when Out of Time's success seemed strangely logical, the next obvious step on the band's steadily upwards journey.

R.E.M.'s seventh full-length gets stranger the harder you think about, its superficial radio-friendly pleasantness belying a record that’s by turns brooding, goofy, anthemic, atonal and as eclectic as anything the band ever put out. It's a record laden with guest musicians, spoken word numbers, songs where Mike Mills sings lead instead of Michael Stipe, silly songs, serious songs, love songs and more. It's all things to all people: for the R.E.M. hardcore, the burning, cathartic, stream-of-consciousness expulsion of 'Country Feedback' tends to be ‘the one’; to buskers and shaggy haired berks around festival campfires in the Nineties, it's 'Half A World Away'; to mistrustful grungers, the cheerily preposterous 'Shiny Happy People' was a stick to unfairly beat the band with.

And then there's 'Losing My Religion'. It is, by any measure, one of the greatest pop songs of the twentieth century. It is an enormous, global hit that sounds like little else ever written; it has no legacy apart from its own success. There are no R.E.M. songs that really sound like it, let alone songs by anyone else. It did not herald a new age of mandolin rock.

Discussing its appeal could fill up this entire review, and probably not really get anywhere. But 25 years in it feels both timeless and inevitable - it has a driving, propulsive power, something about the Möbius strip cascade of Peter Buck's mandolin twirling around Bill Berry's massive drums, in turn impacting with Stipe's snarled/yelped “I thought that I heard you laughing’. I There's so much more to the song than that, but beneath its sleek folky darkness there is a seething nuclear energy.

Out of Time received rapturous reviews upon release, but doesn't often seems to get mentioned as anyone's favourite R.E.M. record. There's any number of reasons why that might be: its eclecticism, for starters: it's not an inconsistent listen, but it's difficult to characterise (at the time Stipe called it a set of 'love songs', which people clung on to but he's admitted wasn't a very good description). It is inevitably overshadowed by the following year's monumental Automatic for the People. And of course, some people – bad people – just really hate ‘Shiny Happy People’ (they’re wrong).

If it does have any through thread it's maybe a certain sense of the pastoral. Politics and heavy guitars are shelved. A yearning for the bucolic carries the likes of 'Low', 'Texarkana' and 'Endgame'. There is something of the innocent, primary school singalong to 'Radio Song' and 'Shining Happy People' (emphasised on the latter by the chipper tones of guest Kate Pierson). And the dark 'Losing My Religion' and 'Country Feedback' feel primal and shamanic – wilderness songs, not city songs.

In many respects the band remained as cryptic on Out of Time as on Murmur, but the mood is lighter – open and innocent. It is R.E.M.'s most welcoming record, the band framing themselves as a virtual collective as Stipe repeatedly makes way for Mills or guests Pierson and KRS-One.

Is it a work of genius? Of course, but it's also an album so devoid of rock star posturing and self-importance, so informal that 'genius' feels like an odd word to apply to it next to the band's conspicuously grander records.

Does it need a reissue? No, but R.E.M. have hardly milked their back catalogue and I think the band's decision to dutifully return to their quarter century campaign is entirely reasonable, even if there's nothing overtly revelatory here.

Disc one is the original album, and though apparently remastered, it basically sounds the same – Scott Litt's crisp, clean production always had a plangent directness that suited Out of Time perfectly, and any remastering tweaks are pretty imperceptible.

Disc two here is entirely comprised of demos, many of them instrumental, and certainly not something to repeatedly listen to in a single sitting. There's some worthwhile stuff here though - the demo of ‘Texarkana’ reveals a completely different, Stipe-led country number with a completely different set of lyrics; the demo of ‘Country Feedback’ confirms the oft-cited fact that the album version is in fact the demo (there’s just a couple of extraneous backing vocals); and really hardcore nerds may be interested in an untitled, unused demo that sounds rather a lot like NAIHF’s ‘Low Desert’.

R.E.M. were now superstars. But in many ways they didn’t seem so far removed from the wry indie leading lights who’d put out Green in 1988. The next year they would put out the autumnal masterpiece that would define their brief, dignified stint as the biggest band in the world.