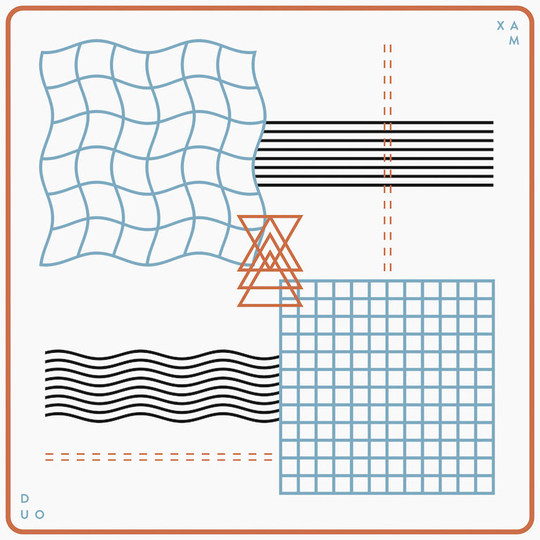 As I’m sure each and every one of you is aware, 2016 has been a bit crappy. We’ve had the death of some of our most cherished rock stars, the frankly catastrophic Brexit result, and now, potentially, the election of one of the most dangerous presidents in the history of the US of A.

Often, at times like this, people call for protest songs, artists people can rally behind for the greater good, people who create movements that those young lasses and lads can believe in. However, the release of XAM Duo’s self-titled debut record has got me thinking, perhaps instrumental, ambient electronica is the new protest music. I mean, angry socialist folk isn’t gonna cut it in the twenty-first century is it? We’re in need of a new direction.

It’s perfect really, when you think about it. What better way to block out the noise of the seemingly imminent apocalypse than with some atonal sax toots and minimalist synth work, such as that featured on opening gambit 'Proem'. Likewise, it feels so nice to just sit back on your beanbag chair (which I’m sure everyone possesses) and just forget about it all with the strangely alluring 'I Open My Arms pt.1', which entice you into its dark and twisted realm with a mixture of krautrock rhythms and Fuck Buttons-esque bleeps and blobs.

Saying this, the record isn’t an escapist fantasy. Far from it. At its core it, perhaps unintentionally, provides a kind of musical accompaniment to the bleak events that are currently terrorising TV screens and tablets across the globe. 'Pine Barrens' in particular comes across like something Adam Curtis would use to soundtrack one of his terrifying, madcap documentaries, possibly on how the popularity of the literary works of RL Stine has contributed exponentially to longevity of the Kim dynasty in North Korea, or something.

The song is all about techno alarms and keyboard whispers. It’s both relaxing and menacing in equal measures, which, I’m sure you’ll agree, is quite a confusing concoction of emotions.

It’s easy to call XAM Duo a Hookworms side project, but to be honest, these days it kind of feels like Hookworms are the side project, not the other way round. Finale 'Rene' makes you forget all about this nonsense anyway. The track cements the groups position as one of the most intriguing electronic acts on this fair isle. As is the case with the rest of the record, the song leans heavily on its electronic influences. This time however, there is a new ingredient, one that is absent throughout the rest of the record: optimism. The track somehow sounds hopeful, almost like waking up in heaven after having a twisted dystopian nightmare. Let’s hope this change in sound is a prediction of the future. We could all do with a nicer 2017.