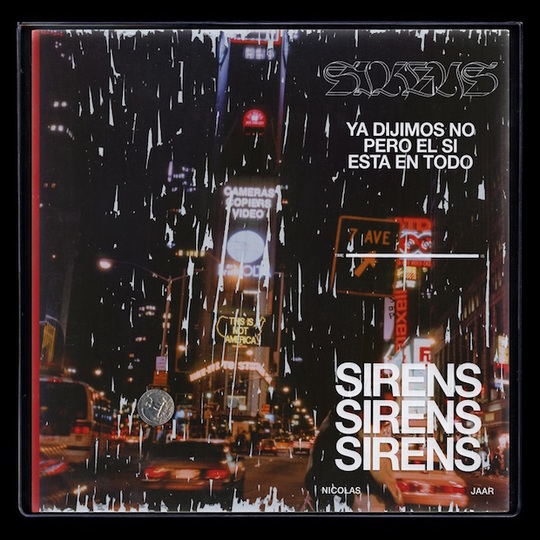 Not only is it really damn catchy, but it also makes it easy to project your own experiences onto and feel like a heartbroken protagonist of a really hip, sad movie - I think that’s what makes it so seductive and gets so many people hooked: it’s accessible, contextually non-specific, lush on the surface, empty beneath it and you can appropriate it as an extension of any feelings or memories of your own.

Nicolas Jaar has been a strong representative of the genre but - as if unsure if his musical endeavours were aiming high enough – he decided to unleash his ambition upon a new project called Sirens. Still very heavily caught up in that electro-mope genre, this time he attempted to make something slightly more of the punchy rhythms and synthy riffs. And the result resembles a child incessantly bashing the wrong LEGO block on top of the other: kind of knowing it doesn’t fit, but kind of hoping it’ll do the trick anyway.

Jaar doesn’t limit himself with the choice of sounds he juxtaposes - the album is a panoply of all sorts of glum, moody audio: there’s the mandatory dejected piano sounding like a really lazy Erik Satie; the weird broken glass sound effects, clearly inspired by holistic massage therapy; medieval chants and lots of other stuff, randomly thrown together in an incoherent string of randomness.

To give it a bit more gravitas and credibility, Jaar threw in some nondescript old-tape chatter between a child (allegedly his younger self) and an adult (his father?) in his native Spanish as well as distant, dystopian messages from a newscaster in the background:

The only thing is, you stop caring somewhere around mid-chapter one. I get it - it’s supposed to be politically charged commentary on the current state of America, a sobering voice of reason and rebellion amidst a bleak, all-consuming tragicomedy, like a modern day Gil Scott Heron or Bob Dylan. But naming a few tracks ‘The Governor’, ‘History Lesson’ or ‘No’ and throwing some Orwellian slogans into the background just doesn’t cut it. There’s not enough substance or consistency to even begin caring about what Jaar has to say about Trump, racism, gun control or whatever he’s trying to touch upon through his art.

Jaar set the bar high with his cool clubby hits like ‘Mi Mujer’ or ‘El Bandido’ as well as his fantastic downtempo project Darkside with Dave Harrington, which makes it hard to settle for the messy, pseudo political blandness of Sirens. There are some cool bits on this album which deceive you into getting excited for a moment: I enjoyed the industrial-inspired ‘The Governor’ which gave off a scent of his older stuff but with a louder, more aggressive force. But waiting around for the good bits in between all the Dada nonsense is like waiting for a YouTube ad to end so you can finally watch the damn video: annoying, unnecessary and involuntary.

It’s not terrible album – it might even make you do a little shoulder shimmy every now and then or remind you of an awesome Depeche Mode song you haven’t listened to in years, but at the end of it you’ll probably find yourself either: a) indifferently bored; b) making bets with yourself on what he’s going to channel next: will it be an oriental theme, a Cuban beat, a doo-wop harmony or will he go rogue with some balalaika? (He doesn’t.)