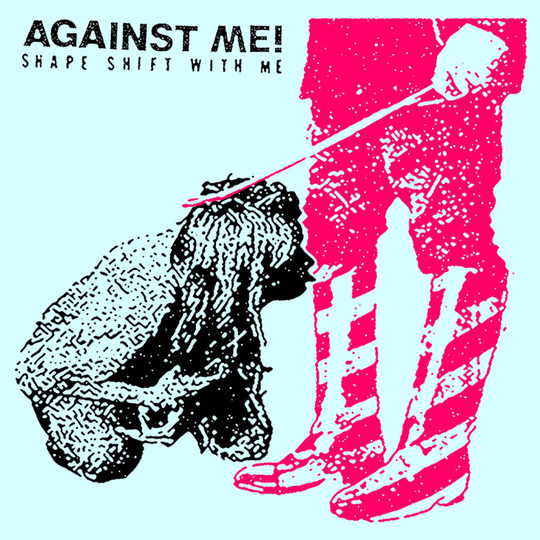 'When you feel targeted as a transperson, the natural inclination is to go into hiding,' Against Me!'s transgender frontwoman Laura Jane Grace told BuzzFeed recently. This was in response to the suggestion that the band should cancel a concert in North Carolina with regards to the state's controversial equality laws. 'But visibility is more important than ever; to go there and have the platform of a stage to stand on and speak your mind and represent yourself.'

And while the show in question went ahead – and saw Grace burn her birth certificate onstage while Springsteen and Pearl Jam twiddled their thumbs in hotel rooms, having cancelled their own gigs – this platform she speaks of is also a metaphorical one from which she delivers Against Me!'s seventh album, Shape Shift With Me, conceptualised around her personal life since her 2012 transformation.

Against Me! have always been about the underlying soul and emotional conflict of a life in the political fast lane; as far back as their 2002 debut, they were chronicling a date during a protest – “We marched together for the eight-hour day / And held hands in the streets of Seattle / But when it came time to throw bricks through that Starbucks window, you left me all alone” they barked on 'Baby, I'm An Anarchist!'. Given the monumental change experienced by the transfrontwoman, it's unsurprising that the introspective topic permeated virtually all of previous release, the acclaimed Trangender Dysphoria Blues.

That continues here but, given how much of a hot topic gender is in today's culture – North Carolina's HB2 law being a prime example – Grace manages to wrap social commentary around personal anguish. Where Transgender Dysphoria Blues was largely about the fearfulness in the immediate aftermath of coming out as trans, Shape Shift With Me – dubbed a relationship record by Grace – is an album with a few years' worth of experience in our strange world as a new person; it's not so much I'm-transgender-and-I'm-vulnerable as it is I'm-transgender-and-I'm-going-to-kick-over-a-table. Of course, being a shy retirer wouldn't be the punk rock option, and Grace has proven that it isn't the path she'd care to tread.

The crashing fury of 'ProVision L-3' makes this clear from the get-go. Following that, we're into the tales, good and bad, of finding love in the post-Tom Gabel world. 'Boyfriend' is the album's 'Black Me Out', with warm tones swelling into room-filling, foul-mouthed hooks. It captures Grace's struggle to get close to another person, having only come to know who she is herself, perhaps finding that she's being forced into a preconceived gender role (“You're treating me like a boyfriend / Some dumb, fucking boyfriend”). 'Crash' is a straightforward but sublime pop-rock number in the vein of Ginger Wildheart's solo output, while '333' keeps things ticking along in a similar but less effective manner; for a lead single, it should be packing, not lacking, and it's topped by the punch of crowd-riler-to-be 'Rebecca'.

If punk was created to empower the outsider, then Grace is evidently coming to terms with her new identity and fuelling her fire by taking the previous record's bittersweet rock 'n' soul, turning up the fuzz and contributing more stomach lining. 'Delicate, Petite & Other Things I'll Never Be' speaks for itself but it's 'Norse Truth' that stands alone as the darkest offering, a spoken-word rant against a former lover, unfettered by melody and haunted by James Bowman's minimalistic yet striking guitar. Their trademark, risqué imagery raises its head here and on the following track, in which Laura pleads that while she's “Clinging tight to your chest / Explode me like a suicide bomber.” They haven't lost their provocative, powerful charm.

Against Me! are a band who've had it tough, be it on an artistic scale – alienated fans decried their punk credibility following their Vig-produced, major-label albums – or through immense personal change. Transgender Dysphoria Blues was a prime example of the latter but, here, Laura Jane Grace is emerging from her shell, grasping her icon status with both hands and speaking up for what she sees as a largely invisible, voiceless group of underdogs. And it doesn't get much more punk rock than that.