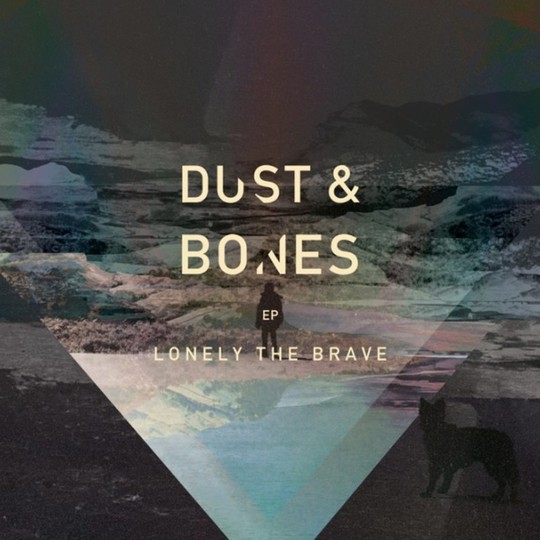 Following up the release of their critically acclaimed second album Things Will Matter almost immediately with four-track EP Dust & Bones featuring three previously unreleased tracks, the cynics amongst us could be forgiven for thinking that Lonely The Brave were making a quick cash-in on some cutting-room-floor extras. There are, however, a couple of impressively punchy here songs that could easily have sat alongside the main bulk of their previous record. Maybe it’s more a case of cleverly drawing out an album campaign in the digital age, but the overwhelming feeling is that this EP could have been reduced to an additional single with some b-sides and free downloads, not quite meriting a release of its own.

Things Will Matter succeeded in maintaining and building upon the musically rich formula that’s seen the band achieve considerable early success, delving into a deeper, darker and altogether heavier place that suited them well. For the most part, the tracks on Dust & Bones act as the lighter Yang to the aforementioned brooding Yin of the album. There’s more melody to be found here, a looser structure with some inventive twinkling guitar lines – if anything it’s more accessible simply due to the bite-size chunks on offer – but this by no means a must-have addition your record collection, more a top-up for existing fans.

‘Place Isn’t Lost’ and ‘Bottled Time’ are the only two new original offerings from the band on this particular release, the former a more traditional driving rock song that’s highly reminiscent of 100 Broken Windows-era Idlewild and Placebo’s 2009 hit single 'The Bitter End'. It’s no nonsense, doesn’t mince its words, and does what it says on the tin, if a little bit lacklustre.

‘Bottled Time’ is more effervescent and sounds both brighter and more vital, it practically hammers on your front door begging for repeat listens. Front man David Jakes has a distinctive, throaty vocal that suits their philosophical melancholy to the ground, as he belts out the track’s memorably anthemic chorus; “Here’s to the diamond skies, deep within the souls inside, but you don’t believe it. We can leave those years behind but you will come and see if there’s a place to bottle time.”

The real talking point here is the very brave choice to cover Pink Floyd’s iconic ‘Comfortably Numb’, but unfortunately it’s a bit of a damp squib to end the EP on – I mean, it’s Pink Floyd, man. Songs like this don’t need to be covered. Ultimately, the twenty-first century treatment given to the track here is more novelty than anything else, coming off a little like an ill-advised tribute which succeeds in draining much of the life and soul from this timeless track. It’s all just a little bit safe and dad rock unfortunately. It must be said though that there’s a valiant effort on the climactic and spine-tingling solo which closes the EP as a whole, with full credit to guitarists Ross Smithwick and Mark Trotter on delivering a musically superb denouement.

Lonely The Brave have so far carved out a career by being the band that can’t be contained to the typically stifling and exclusive UK rock scene, reaching a wider and more diverse audience than their peers – it pointed to something a little bigger on the horizon, maybe a band with more in the tank than the average rock outfit. On this EP there’s sadly not much evidence of that.

They’ve got an impressive swathe of festival dates rolling out over summer and a tour with Tall Ships already lined up for the autumn, but as far as the live set goes we’ll personally be hoping they stick to their guns on tracks from Things Will Matter.