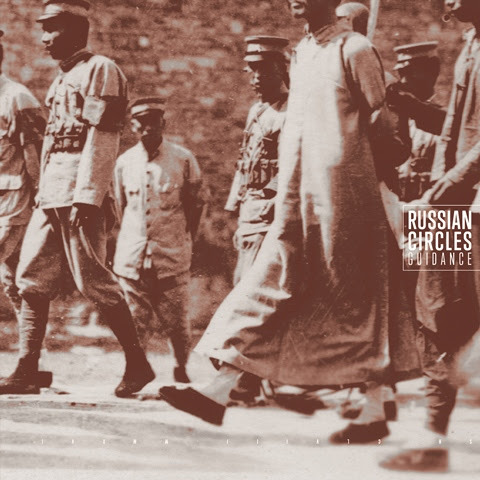 A record that opens up like an old wound»

With their sixth album Guidance, Russian Circles carry on in their quest to conjure multi-dimensional dramatic instrumental narratives and to scout out new textures from their respective instruments. Songs aren't constructed out of highbrow concepts; they're forged out of gut instinct and base emotional response. Nor was the band--as is often the case with artists later in their career--interested in testing their fans' patience or securing a new broader audience with a radical reinvention. Instead, Russian Circles use Guidance to continue examining the polarity of quiet and loud, complexity and simplicity, ugliness and beauty. Every Russian Circles album has had its share of new sonic vistas, and Guidance finds the band still searching out new sounds while continuing to play to the collective strengths of guitarist Mike Sullivan, drummer Dave Turncrantz, and bassist Brian Cook. Starting with the meditative restraint of album opener "Asa", Guidance sets off on a path of metallic savagery ("Vorel", "Calla"), arpeggio tectonics ("Mota"), mercurial anthems ("Afrika"), somber segues ("Overboard"), and seismic Americana noir ("Lisboa"). With the help of engineer/co-producer Kurt Ballou and his God City Studio, Russian Circles were able to capture this broad tonal palette and wide array of emotional motifs into a cohesive journey through the tumultuous corners of human existence. We often expect artists to fall into patterns and formulas, but for Russian Circles the creative method is still a mystery. Songs develop at their own pace. Inspiration comes from strange sources. If anything, the process of writing is every bit the enigma it was back when the band crafted their first song in 2004. Life itself is a struggle with the unknown and a search for meaning, and the creative process for Russian Circles has mirrored that pursuit. The radical dynamic shifts and straightforward production of Enter, the lockstep metallic attack and pensive comedowns of Station, the symphonic grandeur of Geneva, the grit and grime of Empros, and the oscillation between melancholy and wrath on Memorial were all incremental steps towards an ideal, and Guidance brings the band that much closer to that realization. In the interim between albums, a veteran handed off an envelope of war photos to the spouse of a band member. The photos depicted a man being led to his execution. There was no context for the traumatic scenes, no history, no background. Yet the dignity this anonymous figure exuded in his fatalistic march resonated with the band. Here was someone that knew his fate and marched boldly towards his destiny. The band used these photos for the Guidance album art, knowing that we all march towards our own conclusions, and we can only hope that we face our futures with the same honor and nobility. If the band's fourth album Empros (Greek translation: Onward) was a statement of perseverance, Guidance became a statement of striding into the future undeterred by what lies ahead. Gatefold LP + download card.
description from www.roughtrade.com